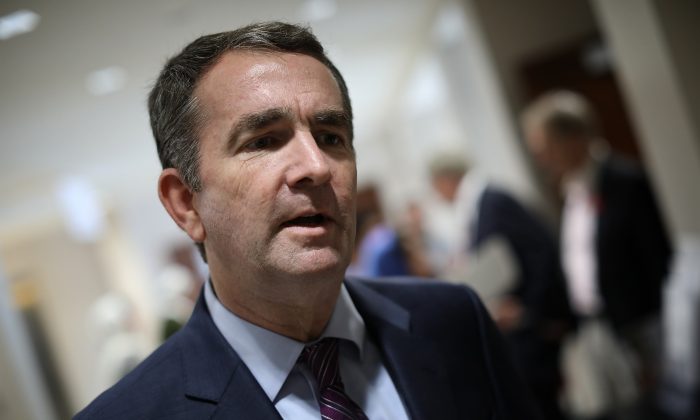 Virginia Gov. Ralph Northam, during a campaign stop at the All Dulles Area Muslim Society in 2017, is facing calls to resign after a picture showing him in blackface or a KKK outfit emerged on Feb. 1, 2019. (Win McNamee/Getty Images)
Politics

Democratic Virginia Gov. Ralph Northam is facing calls to resign from both sides of the aisle after a picture showing him and another person dressed in blackface and a Ku Klux Klan (KKK) outfit emerged on Feb. 1.

Northam, already in hot water from shocking abortion comments he made earlier in the week, is seen in a medical college yearbook standing at a gathering with one other person. One of them is in blackface, or has used paint or makeup to appear black, while the other is dressed in full KKK gear.

It’s not possible to tell whether Northam is the one dressed in blackface or the one wearing the KKK gear. He reportedly claimed that he could not remember which one was him.

The picture was first published on the Big League Politics blog and circulated widely on Friday, prompting cries of outrage from state and national lawmakers, analysts, and members of the public.

Democratic presidential contenders Sen. Kamala Harris (D-Calif.), Sen. Cory Booker (D-N.J.), and Julian Castro, former Secretary of the Department of Housing and Urban Development, were among those calling for Northam to resign.

“These images arouse centuries of anger, anguish, and racist violence and they’ve eroded all confidence in Gov. Northam’s ability to lead. We should expect more from our elected officials. He should resign,” Booker said in a statement posted on Twitter.

“It doesn’t matter if he is a Republican or a Democrat. This behavior was racist and unconscionable. Governor Northam should resign,” added Castro.

Just went to the EVMS library and can confirm on Ralph Northam’s 1984 yearbook page there is a picture of a person in black face standing next to a person dressed like the KKK. #13NewsNow pic.twitter.com/gCLteZRn3k

The Hill reported that Northam told state Democrats that he will not resign.

The Governor released a video statement on Twitter to apologize and defending himself.

My fellow Virginians, earlier today I released a statement apologizing for behavior in my past that falls far short of the standard you set for me when you elected me to be your governor. I believe you deserve to hear directly from me. pic.twitter.com/1rSw1oxfrX

In statement #Virginia Gov. @RalphNortham says the photo on his @EVMSedu yearbook page is “clearly racist and offensive” and “the first step is to offer my sincerest apology.” pic.twitter.com/vxSp2aUv5c

In a statement, Northam admitted he was one of the people in the picture.

The picture shows him “in a costume that is clearly racist and offensive,” he said.

“I am deeply sorry for the decision I made to appear as I did in this photo and for the hurt that decision caused then and now,” he added. Northam said that he would be making a “serious effort to heal the damage this conduct has caused.”

Ralph Northam is a Republican, according to CNN. pic.twitter.com/8Cqhyg5Lil

Amid the uproar, CNN covered the situation extensively but at one point mislabeled Northam as a (R), or Republican, on screen.

The mistake came during “Anderson Cooper 360.”

Donald Trump Jr., President Donald Trump’s son, was among those slamming CNN for the mistake, which he said was malicious.

“Well thats their typical #fakenews. They just want that to be true,” he said on Twitter.

CNN reporter Maeve Reston claimed that it was a mistake.

“Just a quick note, that everyone who works in news – including people who write the Chyrons – we’re all human. We all make mistakes. We try to correct them as quickly as possible,” she wrote on Twitter.

Fox News commentator Stephen Miller was among those who questioned that stance, stating: “CNNPR doesn’t seem to be any rush to ‘correct as quickly as possible’ and their games with snarky chyrons don’t exactly lend us to believe this was an honest mistake. Sorry.”

As of Saturday morning, CNN’s public relations had not addressed what happened.