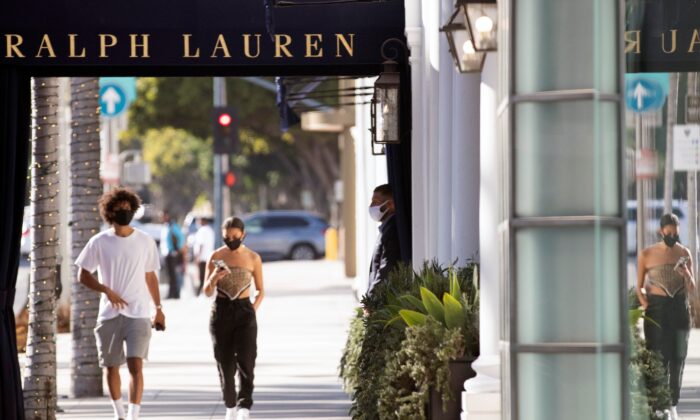 A security guard stands outside the Ralph Lauren store during the outbreak of the coronavirus disease (COVID-19), in Beverly Hills, Calif., on July 30, 2020. (Mario Anzuoni/Reuters)
Companies

Ralph Lauren Corp. said on Tuesday it expects to face higher shipping and commodity costs in the next few months as the high-end apparel maker is spending heavily to ensure stores are stocked with its Polo shirts and sports jackets during the holiday season.

The New York-based company’s shares fell 4 percent in morning trade even after the company raised its full-year revenue forecast.

Unlike its European luxury peers, which manufacture the bulk of their products in their home market, Ralph Lauren sources the vast majority of its offerings from outside the United States, with 40 percent manufactured in China and Vietnam alone, making the company more susceptible to shipping delays and factory closures.

Those supply chain disruptions have especially hobbled the clothing industry, with apparel having the highest online out-of-stock levels among U.S. retail sectors in the run-up to the holiday season, according to Adobe Analytics.

However, Ralph Lauren said it was confident it would have enough stock to meet holiday demand, in part because it is spending heavily to ship products by air.

“While we expect continued variability of inventory flows, from quarter-to-quarter, we believe our inventories are well positioned … to meet demand for the upcoming holiday and spring ’22 seasons,” Chief Financial Officer Jane Nielsen said.

The retailer said it expects constant currency fiscal 2022 revenue to rise 34 percent to 36 percent, compared with a prior forecast of a 25 percent to 30 percent increase.

But Ralph Lauren kept its full-year operating margin forecast unchanged at 12 percent to 12.5 percent, due to higher freight costs and increasing prices of raw materials such as cotton.

Ralph Lauren’s net revenue rose 26 percent to $1.50 billion in the second quarter ended Sept. 25, as resurgent demand for luxury goods in North America and Europe helped offset some pressure in Japan and China where the reinstatement of virus restrictions kept people away from stores.