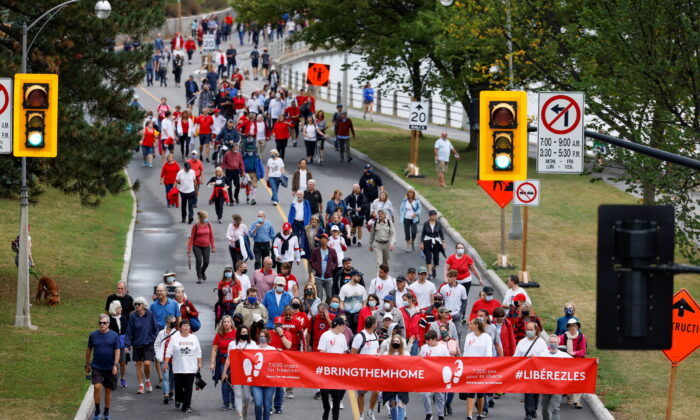 Supporters of Michael Kovrig and Michael Spavor march to mark 1,000 days since the Canadians were arrested in China, during a protest in Ottawa on Sept. 5, 2021. (Reuters/Blair Gable)
Canada

Supporters of two Canadians accused of spying and held in Chinese prison for 1,000 days rallied on Sept. 5 to demand their release.

Businessman Michael Spavor and former diplomat Michael Kovrig were detained in December 2018, shortly after Canada arrested Meng Wanzhou, the chief financial officer of Huawei Technologies, on a warrant from the United States.

Last month, a Chinese court sentenced Spavor to 11 years in prison for espionage. Meng is waiting verdict on her U.S. extradition request after the hearing wrapped up in a British Columbia court last month.

Several hundred people gathered at a park in Ottawa, with some wearing white shirts printed “March for the Michaels,” “7,000 steps for freedom,” carrying banner “#bringthemhome.

“Every day in his cell, Michael Kovrig walks 7,000 steps to keep his mind and body healthy. Michael Spavor uses yoga, meditation, and exercises to stay strong,” the families wrote on a Facebook page seeking support for the event.

Prime Minister Justin Trudeau, who has called a snap election for Sept. 20, is trailing his main opponent, Conservative Party leader Erin O’Toole, who has demanded a tougher approach against China.

“We have to deal with the communist leadership in China, as it is not as Mr. Trudeau may have hoped it was. He’s always been out of step with respect to our interests and our values. So I’ve said Canada will be a leader on human rights again,” O’Toole told reporters in Vancouver on Sept. 4.

Trudeau, when asked about criticism that his government had not done enough to free the two Michaels, said on Sept. 5 when dealing with citizens in trouble abroad, “we use all the tools at our disposal, usually not shouting in the public square.”

He said that government over the past 1,000 days has put forward all the different range of tools to put pressure on the Chinese government to return the two men.

“We will not rest until the two Michaels are once again home with their families,” he told reporters.

Canada’s Foreign Affairs Minister Marc Garneau, who joined the rally, said in statement that years have been cruelly stolen from both men and their families.

“This must stop. Mr. Kovrig and Mr. Spavor must come home,” the statement added.