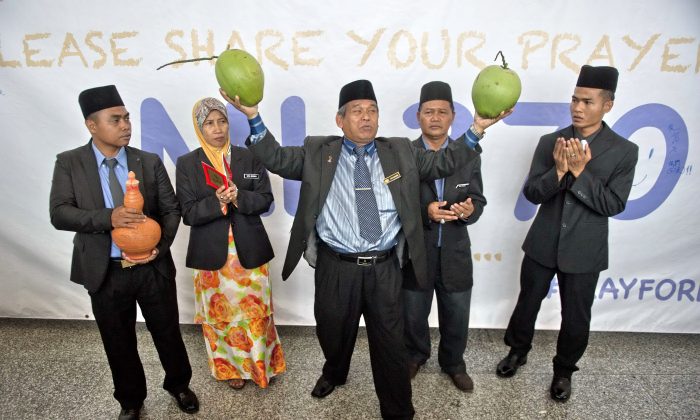 A well-known Malaysian malay bomoh (shaman), Ibrahim Mat Zin (C) holds two coconuts as him and his assistants offer to locate the missing Malaysia Airlines flight 370 plane using a spiritual method and prayer at the Kuala Lumpur International Airport (KLIA) in Sepang on March 12, 2014. Malaysia has expanded its search area for a missing jet after three days of scouring the sea failed to bring forth any confirmed sightings of wreckage, an official said. (MOHD RASFAN/AFP/Getty Images)
Asia & Pacific

A Facebook post stating that Malaysia’s famous magic man is doing “research” about Flight MH17 at Kuala Lumpur International Airport has been called out by Facebook users.

In the picture in the post, Raja Bomoh is seen with his assistants, his “magical” carpet and walking stick, and two coconuts, and appears to be led by airport security.

Some Facebook users called out the post as a fake. Users IceSky Calvin and Nina Ghazali note that the picture used was from an older Malaysian Insider article about Raja Bomoh during the MH370 incident, and is definitely not a recent photo.

When Malaysia Airlines Flight 370 went missing in March, Raja Bomoh had offered his “assistance” in locating the plane.

Rajah Bomoh showed up at Kuala Lumpur International Airport with his “magical” props, did some rituals, and later told reporters that “The purpose of the rituals is to weaken the bad spirits so that the rescuers can find the plane if it indeed had crashed.”

The Rajah Bomoh post may be a fake, but the “Malaysia Airlines Flight MH17” Facebook page also carries actual news, and does not seem to be a spoof page.

There are no other reports that confirm whether Rajah Bomoh was at KLIA or not.

The Rajah Bomoh post has since gotten more than 1,700 shares and 444 likes.