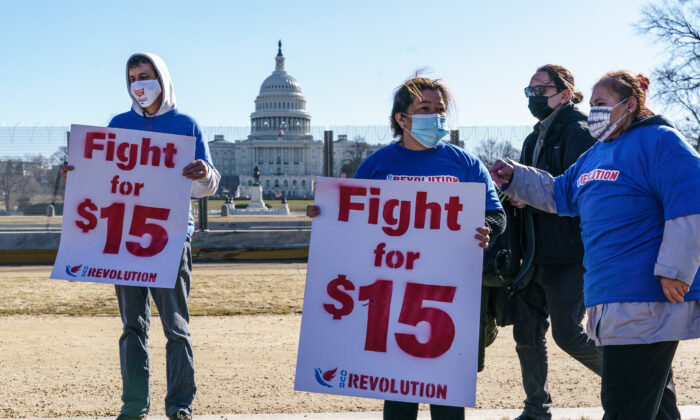 Activists appeal for a $15 minimum wage near the Capitol in Washington on Feb. 25, 2021. (J. Scott Applewhite/AP Photo)
Viewpoints

On Aug. 16, President Joe Biden signed the $700 billion-plus Inflation Reduction Act. Some experts believe it will not help curb inflation, whereas others believe it will actually worsen things. The inflation, which largely stems from government spending on the COVID-19 pandemic, cannot be constrained by additional spending or legislation related to wages. The job market is in flux. Companies are laying off workers, but Democrats in various parts of the country still call for an increase in the minimum wage.

In early 2021, the Raise the Wage Act was introduced by Democrat congressional representatives. It called for a $15 minimum wage and to eliminate the separate, lower minimum wage for tipped workers. On April 27, 2021, the White House issued an executive order raising the minimum wage for government contractors to $15 an hour, suggesting that a higher minimum wage would help the economy, reduce poverty, increase productivity and efficiency, generate higher quality work, and reduce turnover and absenteeism.

If it were true that raising the minimum wage would improve corporate profits through increased productivity and the other benefits outlined by the White House statement, companies would have raised the minimum wage long ago, irrespective of legislation.

As for tipped workers, studies have found that raising tipped workers’ minimum wage would put waiters and waitresses out of a job. Raising the tipped minimum wage from $2.13 an hour to the current federal minimum wage of $7.25 would nearly triple the cost of employment. To remain in business, restaurants would have to either pass this cost on to customers in the form of higher prices or reduce their costs by firing workers. Either way, raising the wage would reduce jobs because the higher prices would decrease the number of meals sold in restaurants.

Those who support a higher minimum wage cite a study by CNBC and MIT, which determined that some families could not live on a $15 minimum wage. And while this is most likely true, it would also have been true in 2019 when the minimum was lower.

Over 44 percent of those earning the current federal minimum wage of $7.25 are 16 to 24 years of age. This demographic is much less likely to be supporting a family. Studies have also determined that only 10 percent of minimum wage earners are in single-family households. About 67.1 percent are part-time workers, and the vast majority are second and third-wage earners in families that earn $50,000 per year.

Automation has already replaced many jobs over the past two decades. Workers at Blockbuster were replaced by Redbox and Netflix. Parking lots and toll booths are increasingly unmanned. Grocery stores and retailers are shifting to self-service checkouts. Airports have self-service check-in kiosks as well.

Mcdonald’s in most of Asia has eliminated staff by implementing a kiosk system, and U.S. national hamburger chain White Castle is trying out robotic fry cooks in some of its restaurants.

Customer service chatbots are also eliminating jobs in the service field. Sectors that are expected to lose a tremendous number of jobs to automation over the next few years include data entry, customer service, couriers and delivery services, market research, proofreading, and manufacturing.

In a 2015 report, the Federal Reserve Bank of San Francisco stated that the “overall body of recent evidence suggests that the most credible conclusion is a higher minimum wage results in some job loss for the least-skilled workers.” The least skilled jobs are the ones most easily automated.

As companies face rising costs due to inflation and declining sales, a forced increase in the minimum wage may be the impetus that motivates them to lay off staff or invest in robotic technology. Either way, the lowest-paid workers in our economy will be the most affected.