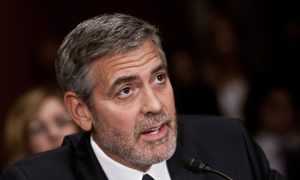 Clooney Appeals to Washington for Action on South Sudan
0 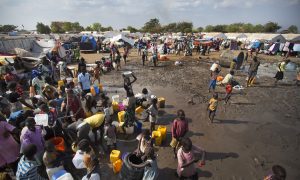 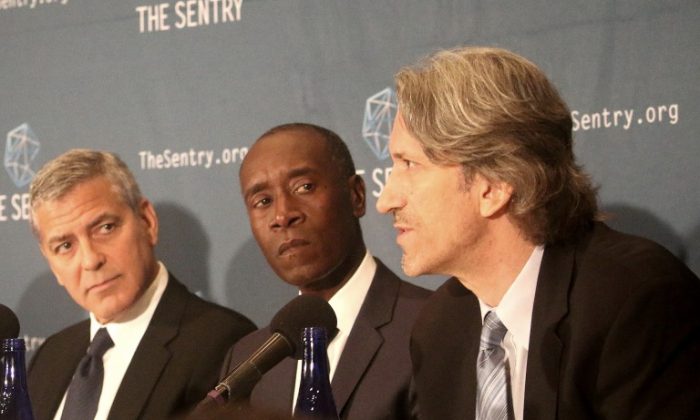 Actors George Clooney (L) and Don Cheadle (C) appear with author John Prendergast at the National Press Club, Sept. 14, to discuss the findings of a two-year investigation into the networks of corrupt South Sudan's senior officials. Clooney and Prendergast co-founded The Sentry and have an abiding interest in African issues. (Gary Feuerberg/Epoch Times)
Africa

WASHINGTON—The peace agreement between the warring factions in the world’s newest nation, South Sudan, has been an abject failure, as war crimes, extreme violence, destruction, near famine, and looting persist.

A new report by The Sentry—an investigative initiative co-founded by actor George Clooney and African issues expert John Prendergast—may explain the reason for the failure. An investigation into the assets of the rival leaders of South Sudan, President Salva Kiir and former Vice President Riek Machar and their respective families and their top generals and government officials, reveal in detail how they benefit from massive corruption and war profiteering.

The report also sketches a way the U.S. government and the international community could alter the risk calculations of the kleptocrats and their enablers so that they are incentivized to turn away from violence, atrocities, and corruption.

On Sept. 12 at the National Press Club in Washington, D.C., Clooney and Prendergast joined by actor Don Cheadle and the lead investigators of The Sentry, made a public statement and released a 65-page report, titled, “War Crimes Shouldn’t Pay: Stopping the Looting and Destruction of South Sudan.”

It accuses Kiir and Muchar and their inner circles of accumulating fortunes by “fueling and exploiting a brutal civil war while their nation suffers famine-like conditions and the horrors of armed conflict, including mass rape, the burning of villages, and the use of child soldiers,” states their opening statement.

The single fact is that [President Kiir and former Vice President Machar] are stealing the money to fund militias to attack and kill one another.
— George Clooney

The human suffering in South Sudan is staggering. More than 2.3 million people have been displaced and forced to flee their homes, according to REACH, an agency that was created in 2010 to secure the kind of information useful for the humanitarian community’s decision-making. The Office of the United Nations High Commissioner for Human Rights (OHCHR) says that 5.1 million people, out of a nation of 12 million, require food assistance.

The press release says that through insider deals and fraud, South Sudan’s president and former vice-president have accumulated fortunes both inside and outside the country that include “overseas mansions, luxury cars, and stakes in an array of businesses—major multinational oil and mining companies, banks, casinos, and an airline.”

South Sudan leaders are draining the country’s resources in order to purchase deadly weapons from arms dealers and fund armed groups used to attack the civilian population bases of their rivals,” states a Washington Post op-ed by Clooney and Prendergast. They state that an estimated two-thirds of the country’s budget goes to military spending, leaving little left for the welfare of citizens.

At the news conference a statement was provided from Dr. Remember Miamingi, a South Sudanese national and human rights lawyer and director of the Pan-African Centre for the Study and Support of Family in South Africa, which links the war with corruption: “The war, for many, is a vector and a veil to loot public coffers and amass personal wealth. Therefore, unless and until the profits from the war dry up, this war will not stop. The first step to disrupting this war business is unveiling these criminal cliques who profit from killing others and destroying the country.”

The first step to disrupting this war business is unveiling these criminal cliques who profit from killing others and destroying the country.
— Dr. Remember Miamingi, director, Pan-African Centre for Study and Support Family in South Africa

Clooney and Prendergast assert in the aforementioned op-ed that the South Sudan leaders are engaged in disingenuous and insincere diplomacy while fighting over the spoils of the resource-rich state. “The leaders agreed to a peace deal, but have implemented few of the provisions. … They have agreed to international humanitarian aid, but their forces obstruct the aid agencies at every turn and even attack, rob, and rape aid workers.”

The team contacted over 100 individuals who worked for the South Sudan government, or formerly did, and various eye witnesses to properties and assets.

The Sentry found that Gen. Malong owns at least two luxurious villas in Uganda in addition to a $2 million mansion in a gated community in Nairobi, Kenya. Yet the general makes approximately $45,000 annual government salary.

The findings are similar for the other two generals. “Foreign companies have made direct payments to the personal bank accounts of high-ranking South Sudanese generals,” states the report. In one instance, The Sentry reviewed a document that showed $3.03 million was deposited in Gen. Reuben Riak’s personal bank account between 2012 and 2016.

They have agreed to international humanitarian aid, but their forces obstruct the aid agencies at every turn and even attack, rob, and rape aid workers.
— George Clooney and John Prendergast, co-founders, The Sentry

South Sudan’s constitution “prohibits constitutional office holders from maintaining stakes in private businesses while in office,” according to the first footnote in the report. Investigators found that “President Kiir’s 12-year-old son held a 25 percent stake in a holding company formed in February 2016,” according to the report; a photo of the document was shown at the press conference.

The Muchar family enjoys “an extremely comfortable lifestyle living outside the country,” which is inconsistent with his $54,000 annual salary in 2013-14. The former vice president apparently has extensive ties to international arms brokers.

Investigators discovered that President Kiir and Vice President Machar have villas just a short drive from one another in the upscale Lavington neighborhood of Nairobi, Kenya.

Investigators discovered that President Kiir and Vice President Machar have villas just a short drive from one another in the upscale Lavington neighborhood of Nairobi, Kenya.
— report, War Crimes Shouldn't Pay

The report recommends using the tools of financial pressure that have worked so well in countering terrorism, organized crime, and nuclear proliferation and to apply these to Sudan. The new strategy combines targeted sanctions focused on top regime officials and their international facilitators with anti-money laundering measures.

The speakers at the press conference want sanctions directed at the facilitators and enablers of corruption and mass atrocities—the bankers, businessmen, arms dealers, shipping agents, accountants and lawyers. They want to make it difficult for the entire kleptocratic network to “access the international banking system, move cash, buy property, and do business across borders,” Prendergast said on the PBS Newshour, Sep. 12.

Beginning with President Obama issuing an Executive Order on South Sudan, they want the U.S. Department of Treasury’s Financial Crimes Enforcement Network (FinCEN) to get involved. When the South Sudan senior officials and facilitators of financial misconduct seek to purchase real estate, FinCEN could consider it as a money laundering scheme, and, for example, prevent the purchase of a luxury home with corrupt proceeds.

They want to hold accountable the banks that facilitate money laundering. Large financial transactions involving government or military persons “ought to raise red flags that those transactions … may have been unlawful or otherwise improper. Due diligence with respect to such transactions enables banks to prevent the laundering of illicit money, including the proceeds of corruption,” the report states.

At the same time, they called for care to reduce the probability of unintended consequences of these anti-laundering measures that could inhibit or prevent legitimate financial transactions.

Prendergast said that Clooney, Cheadle, and he were meeting with President Obama that afternoon.