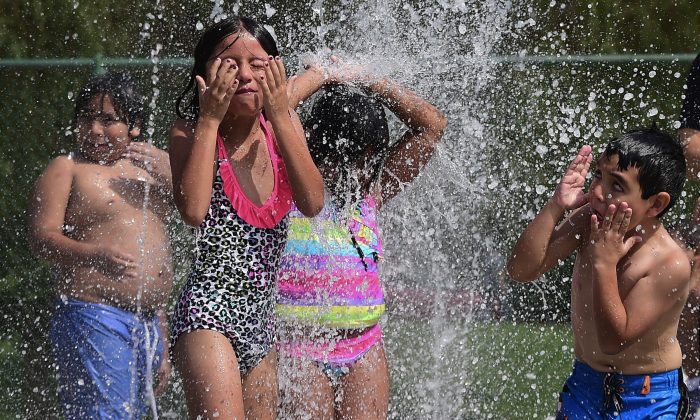 Children play in a fountain in this file photo. The U.S. Department of Agriculture released its annual report on the cost of raising a child. (FREDERIC J. BROWN/AFP/Getty Images)
US

WASHINGTON—Parents of a child born in 2013 into a middle-income family can expect to spend about $245,340 by the 18th birthday, according to the annual report, “Expenditures on Children and Families,” released by the U.S. Department of Agriculture (USDA) on Aug. 18. Adjusting for an annual inflation rate of 2.4 percent, the projected cost will come to about $304,480. (http://www.cnpp.usda.gov/Publications/CRC/crc2013.pdf)

Compared to one year before for a child born in 2012, this figure was only 1.8 percent higher, said Dr. Mark Lino, USDA, the principal author of the study. Lino said at a teleconference Aug. 18 that annual increases normally average about 4 percent.

The report was developed by the USDA Center for Nutrition Policy and Promotion (CNPP). Estimates are used in developing state child support guidelines and foster care payments.

A middle-income family is defined in the report as the middle third of the income distribution for a two-parent family with children. Expenditures are for food, housing, child care and education, and other child-rearing expenses. Costs associated with pregnancy and expenses after 18, such as college, are excluded.

Costs increase as the child grows older. “Teenagers are the most expensive,” said Lino. “They have higher food costs, greater nutritional needs, and higher transportation costs.”

Compared to 1960, the first year the report was issued, the expected costs have increased 24 percent. To raise a child to age 18 in 1960, a middle-income family could have expected to spend $25,230, which is $198,560 in 2013 dollars. Housing was the largest child expense then, as it is now. Health care expenses have about doubled in relative size of the total costs, and child care has grown. It was “negligible” back in 1960, states the report.

“Relative to 1960, child care has become a major expenditure on children,” said Lino.

For low-income families and single-parent families, food was second in costs, at 18 and 21 percent, respectively, of the total costs, said Lino at the teleconference.

The number cited above—$245,340—is merely a point estimate for middle-income families, that is, incomes between $61,530 and $106,540. It doesn’t tell the whole story because there is wide variation about that number. The single biggest factor affecting it is household income level, which strongly correlates with child-rearing costs.

Most single-parent households fall in the lower income group, below $61,530, compared to one-third of husband-wife families. “Most single-parent families (85 percent) were headed by a women,” states the report. Within the lower-income category, the study found that single-family households were 7 percent lower in their child-rearing expenses than two-parent families.

Besides household income, region of the country and the urban-rural dimension affects the average cost of middle-income families to raise a child to age 18. Child-rearing costs were highest for two-parent families in the urban Northeast ($282,480), and the lowest in the urban South ($230,610) and rural regions ($193,590) of the country.

Data used to estimate expenditures on children are from the 2005-2006 Consumer Expenditure Survey, which is administered by the U.S. Census Bureau. The report states that this survey is the “most comprehensive source of information on household expenditures available at the national level.” The expense estimates were adjusted to 2013 dollars by using the Consumer Price Index (CPI).

The sample consisted of 11,800 husband-wife households and 3,350 single-parent households.