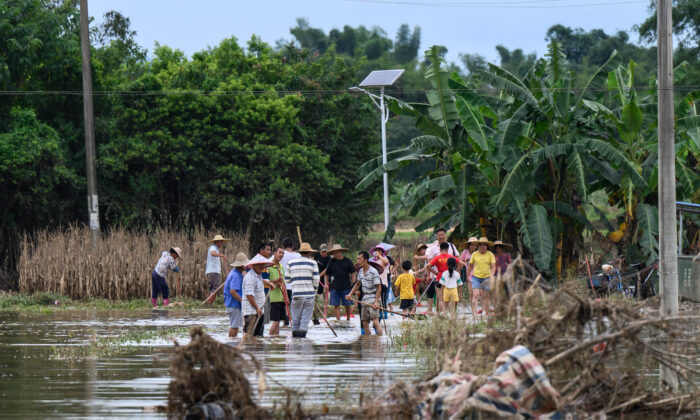 All of China must prepare for potential disasters as this year’s flood season reaches a pivotal period, an official warned on Friday, after months of torrential rains and floods.

Since the flood season began in March, average rainfall is 10.7 percent higher than normal, and has doubled in some parts of the south. Rain in the Pearl River basin in the southern province of Guangdong is at its highest on record.

In Shenyang, capital of Liaoning province, its 7.6 million residents were caught off-guard by the unexpectedly heavy rain even though several red alerts, the highest in a four-tier storm warning system, had been issued.

Residents woke up to public messages on their phones telling them to delay heading to work and call off any non-essential activities because of “extreme weather.”

Staff from the power utility were called out after members of the public reported that a pedestrian had been electrocuted in a pool of water at an intersection.

Video clips of the body of a woman being pulled out of water by a road appeared on social media but were later removed. Authorities confirmed her death but not the cause.

Traffic police data showed 52 waterlogged sections of roads on Thursday, 30 of which were closed.

Five students and a driver were marooned in a school bus in one inundated area, state television reported.

From the province of Hebei in the north to Anhui in the east, many motorists were trapped in their cars as engines stalled on waterlogged roads, state television footage showed this week.

In the past month, China has grappled with extreme weather from heatwaves to historic floods.

Over the next 12 hours, flood-swollen rivers were expected to inundate farmland and urban areas in the Jilin cities of Changchun and Siping.