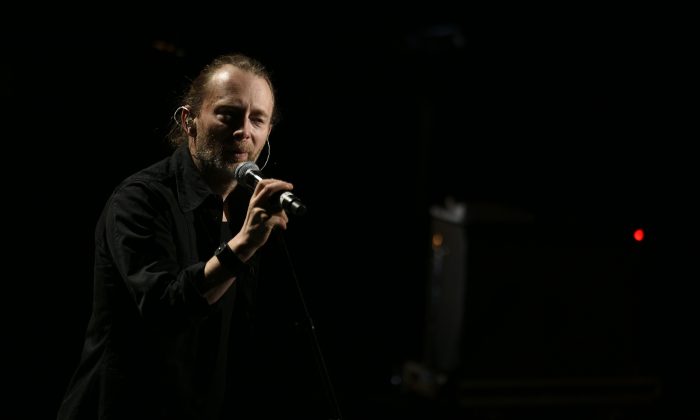 British singer and leader of Radiohead, Thom Yorke performs on the stage of the Trianon in Paris, on Dec. 4, 2015. (Martin Bureau/AFP/Getty Images)
Entertainment

Radiohead seems to be performing an elaborate stunt. On Sunday, the band wiped its online presence. Fans speculate a new album may be released any moment.

At around 11 a.m. Sunday, people began to notice the opacity of Radiohead website has been lowered, bit by bit, until it reached zero at around 1 p.m. (EST).

By 2:30 p.m., the same thig happened to the Twitter of Thom Yorke, Radiohead’s singer and songwriter.

By around 4:45 p.m. the Twitter of Jonny Greenwood, the band’s guitarist and keyboardist, turned white, though the content was not deleted.

Radiohead’s 9th album is expected to be released this year, but so far it’s shrouded in secrecy.

Fans are speculating the online disappearance is a build up to the imminent release of the album.

There a couple of hints.

On April 30, fans reported receiving a flyer sent via British post with three lines of text: “Sing a song of sixpence that goes, ‘Burn the witch’ “We know where you live.”

Umm, I just got this in the post from Radiohead. Is the new album called Burn The Witch? pic.twitter.com/zv5QKnDeGh

“Burn The Witch” is the title of a Radiohead unreleased song. It has been teased to fans during live performances, according to Pitchfork.com.

April 30 is known as the Witches Night in Central and Northern Europe, where large bonfires are held to welcome the spring. Sometimes a witch figurine is paced in the bonfire.

The band also registered two new companies, Dawn Chorus LLP and Dawnnchoruss Ltd.—something they have previously done prior to releasing a new album, according to factmag.com