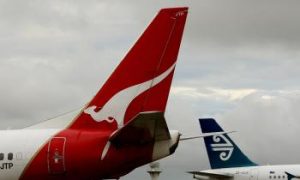 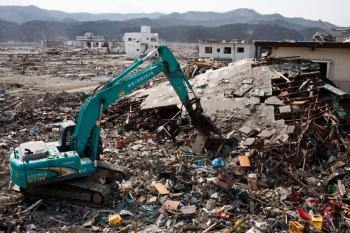 Japanese workers use a hydraulic machine to demolish a wrecked building in the tsunami-devastated town of Rikuzentakata, Iwate prefecture, on April 2, 2011. (Yasuyoshi Chiba/AFP/Getty Images)
World

Radiation Leaks at Japanese Plant Will Take Months to Stop

A Japanese official said Sunday that it will take at least several months to stop radiation leaks at the earthquake and tsunami crippled nuclear power plant.

The estimate comes after operator Tokyo Electric Power Company (TEPCO) found a 20-cm (7.9-inch) crack in the concrete pit at the No. 2 reactor on the weekend at the Fukushima Daiichi plant. The air above the pit showed levels of 1,000 millisieverts/hour. Experts say that such doses of ionizing radiation can cause radiation sickness.

TEPCO said it injected fresh concrete into the pit to try to seal the hole, the company reported in a press release.

It is believed that leaks at reactors 2 and 3 have allowed steam containing radioactive substances to escape continuously. Fires and explosions damaged four of the six nuclear reactors after their cooling systems were damaged in the tsunami.

“We have not escaped from a crisis situation, but it is somewhat stabilized,” Goshi Hosono, a Democratic Party representative and aide to Prime Minister Naoto Kan, told Japanese Fuji on TV Sunday.

Engineers and analysts estimate that it will take 30 years to completely decommission the damaged plant, according to a report by Bloomberg last week.