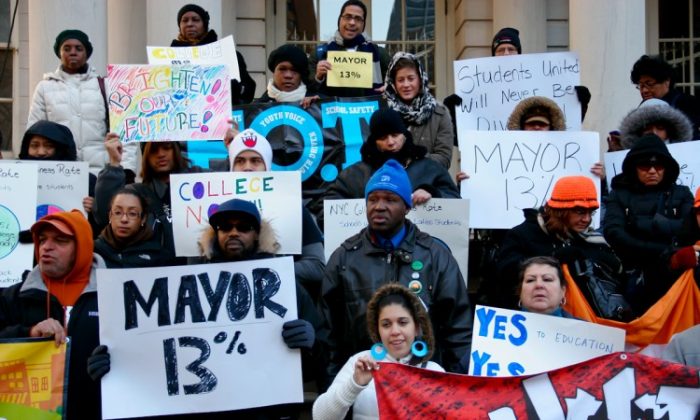 Protesters hold signs on the steps of the City Hall on Jan. 19. The signs draw attention to the percent of black and Latino students who are college ready upon graduating from high school. (Ivan Pentchoukov/The Epoch Times)
US

The City Council Committees on Education and Higher Education held a first-ever joint hearing to address the issue on Jan. 19 across from City Hall.

Half an hour prior to the hearing, students and community organizations gathered on City Hall steps to bring attention to the racially charged statistics.

“It’s a shame that, as a student, all my college support came from outside of the Department of Education,” said Chima Agwu, a senior at the Belmont Preparatory High School.

The Urban Youth Initiative, the organizer of the protest, demanded that the city institute policies, which would allow high schools to support students throughout the college application process, such as hiring more college counselors. This position is not currently funded by the city, despite “evidence that they [college counselors] have a dramatic impact on college-going rates and financial support for college,” according to a press release.

The city’s education system has been affecting positive change in this regard, yet the gap is still sizable. The number of high school graduates enrolling in City University of New York (CUNY) Colleges has gone up 34.7 percent for black students and 84.8 percent for Hispanic students between 2002 and 2010, according to the CUNY Office of Institutional Research and Assessment released in July 2011.

“The reality today is that a high school degree is not enough for the average student to compete for the jobs that are being created, especially as our city continues to attract more technology-based jobs,” said Councilman Ydanis Rodriguez, chairman of the Higher Education Committee.

“However, it’s not enough to say ‘you need to go to college.’ If we really want young New Yorkers to have the opportunity to get these jobs, we have to make sure that our schools not only prepare them to enroll in college, but actually prepare them to succeed.”

The DOE has in fact been steadily improving in term of outcomes for students having graduated high school. The number of those not graduating and those receiving only a local diploma has dropped by almost 18,000 since 2005. Meanwhile, the number of students graduating with a Regents diploma and considered college ready has increased by more than 21,000, according to the DOE’s Progress Report on College Readiness Index.

The city measures a student’s preparedness for college with Regents scores. A score above 65 is enough to graduate high school, but a score above 75 is required to bypass mandatory remedial coursework at CUNY. More than 51 percent of DOE graduates required CUNY remedial work in 2010.

The DOE recognized the issue some time ago. The department has been test-driving a new systemwide curriculum called Common Core standards. Common Core is a core curriculum being adopted in many schools nationwide. It emphasizes several key changes in math and literacy education for grades K- 12.

The figures are made possible through a partnership between CUNY and the New York City Department of Education (DOE). CUNY tracks students’ progress in college and shares the data with DOE, which can then gauge the effectiveness of its reforms.