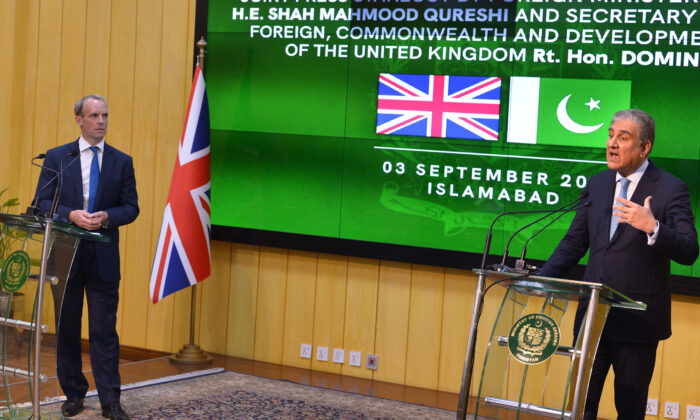 Raab Visits Pakistan to Discuss Safe Passage out of Afghanistan

British Foreign Secretary visited Pakistan on Thursday and Friday to discuss safe passages from Afghanistan for British nationals and Afghans who worked for the UK.

The foreign secretary posted a number of photos on Twitter, showing him arriving at what appears to be a mountain at the Pakistan–Afghanistan border by military helicopter, and speaking with Pakistani soldiers.

“Good to see [the] situation on the ground and understand what’s happening at the Pakistan–Afghanistan border,” Raab wrote.

“Discussed safe passage for British Nationals, and those who have worked with [the] UK in Afghanistan.”

“We have a shared interest in supporting a stable and peaceful future for Afghanistan,” he said.

He also said the UK will support “regional partners, particularly like Pakistan,” which are expecting large influxes of Afghan refugees.

In an earlier statement on Friday, the Foreign Office said the UK will allocate £20 million ($28 million) to such countries to support reception and registration facilities and provide essential services and supplies.

Another £10 million ($14 million) will be made available immediately to humanitarian partners, such as the UNHCR, to enable essential supplies such as shelters to be dispatched to the Afghan borders as well as setting up sanitation and hygiene facilities, the Foreign Office said.

Raab traveled to Pakistan from Qatar, the first leg of his diplomatic mission to rally regional support regarding the situation in Afghanistan.

During his visit to Doha on Thursday, Raab toured the temporary housing facilities holding Afghans waiting to be processed before travelling to their final destination.

He also spoke to Tajikistan Foreign Minister Sirojiddin Muhriddin and discussed how the two countries can help maintain stability in the region, and tackle the humanitarian situation in Afghanistan.

The British military airlifted about 15,000 British nationals, Afghans nationals who worked for the British military or government, and their families during Operation Pitting—a two-week evacuation operation after the Taliban took over Kabul in mid-August.

It’s hard to know many were left behind after the Taliban refused to extend the U.S. imposed evacuation deadline on Aug. 31, but ministers previously said that the estimated number of British nationals remaining in Afghanistan is “in the low hundreds,” and that between 800 and 1,100 Afghans who would have been eligible to settle in the UK under the Afghan Relocations and Assistance Policy were left behind.

While establishing processing hubs in countries surrounding Afghanistan, Raab also spoke to the Qataris—who have acted as an intermediary between the West, the former Afghan government, and the Taliban—about getting Kabul airport up and running again to resume evacuation.

“I don’t think we’re yet able to say anything formal but that’s looking like it may happen at some point in the near future,” Raab said on Thursday.

Qatari Foreign Minister Sheikh Mohammed bin Abdulrahman Al Thani said on Thursday that there hasn’t been a “clear indication” when the airport will be fully operational, but he was “working very hard” on it, including negotiating with the Taliban.

“We will remain hopeful that we will be able to operate it as soon as possible,” he told a press conference.