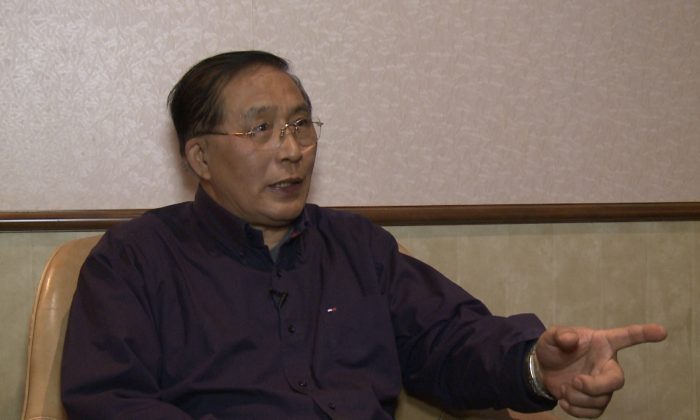 Han Guangsheng, a Toronto resident who defected to Canada from China in 2001, says the large numbers of people cutting their ties with the Chinese Communist Party symbolizes hope for a better future for China. (NTD Television)
Canada

OTTAWA—The milestone of 200 million people quitting the Chinese Communist Party (CCP) and its related organs has given a former Chinese official who defected to Canada 14 years ago hope for China’s future.

“China’s future is certainly bright, because so many people have woken up and now see through the nature of the CCP and its tyranny, its autocracy, its crimes against humanity, as well as its corruption,” says Han Guangsheng, a resident of Toronto.

“This, coupled with the fact that people are quitting the Party daily, will enable China to eventually move toward democracy, rule of law, and a constitutional government.”

Han himself renounced his membership of the Party in 2005.

Han became the deputy chief of the Shengyang City Judicial Bureau in 1996, and was made director of the bureau in 1999. But he defected to Canada in September 2001, mainly because he became disillusioned with and resentful of the Communist regime’s dictatorship and autocracy.

It was a trip of no return, but he has no regrets.

So many people have woken up and now see through the nature of the CCP and its tyranny, its autocracy, its crimes against humanity, as well as its corruption.
— Former Chinese official Han Guangsheng

“The most correct thing I did in my life is leaving China and breaking away from the CCP. This is something I will never regret. In addition, my friends, my former colleagues, former subordinates, those who were able to get in contact with me, all sent greeting to me, expressed admiration, and expressed they agree with my actions,” he says.

Among the students who entered Nankai University in 1977, Han was the first to become a member of the CCP. Back then, universities had just resumed accepting students through standardized entrance exams after the Cultural Revolution.

Soon, however, he became disillusioned with the reality within the Party and how it operates.

“My resentment originated from the Tiananmen Square massacre on June 4, 1989. Over the next 10 years, I wanted to do something to change the situation of the CCP from inside the system. But later I found it was completely impossible,” he says.

For Han, the straw that broke the camel’s back came with the launch of the CCP’s campaign of persecution against tens of millions of adherents of the Falun Gong spiritual practice in July 1999.

He expressed his opposition when he was directed to incarcerate Falun Gong adherents in prisons and forced labour camps. As the director of the Justice Bureau, he was responsible for these facilities in Shenyang City. He says he argued that the Falun Gong issue was one of belief, and that these people were not criminals, but to no avail. He secretly began to plan his defection.

“After the CCP started persecuting Falun Gong, for a long time I saw many innocent Falun Gong practitioners imprisoned, or sent to forced labour camps without legal basis, without legal trial,” he says.

“So seeing the CCP’s brutal, desperate acts against humanity, I did not want to be an accomplice, or an executioner of their policy, so I decided to leave.”

Han, who runs a small business in Toronto, believes the Party’s days are numbered.

“They are like passengers on board the Titanic, getting ready for the ship to be wrecked.”