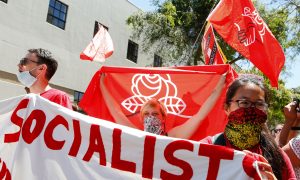 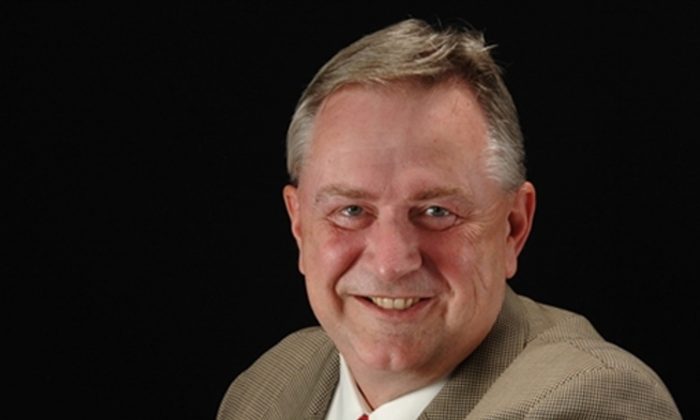 Supporters say Stockman is being punished for his zealous pursuit of Obama-era wrongdoings, and in particular, for going after former Internal Revenue Service nonprofit division official Lois Lerner for targeting conservative nonprofits.

“It was a totally political attack,” said Art Harman, who was Stockman’s legislative director during his recent term in Congress.

“The prosecution was initiated two weeks after he introduced a resolution calling for the arrest of Lois Lerner,” Harman told The Epoch Times in an interview.

“There were three grand juries that found nothing on him, but they kept spending taxpayer dollars to get him on something,” he said, comparing Stockman’s plight to that of embattled Trump confidant Roger Stone and now-imprisoned campaign manager Paul Manafort, who was convicted of crimes unrelated to the Trump campaign.

In an interview, Stockman’s wife, Patti Stockman, told The Epoch Times her husband presented “a clear political target” for the Obama administration, describing the prosecutorial process as “a definite railroad job.”

“They were spying on him,” she said. “I call it an investigative proctoscopy of his whole life.”

One of the more colorful members of Congress in recent years, the Republican served two nonconsecutive terms in the U.S. House of Representatives, from 1995 to 1997, and then from 2013 to 2015. He challenged U.S. Sen. John Corbyn (R-Texas) in 2014, but lost the GOP primary. It was Stockman’s activities in his second House stint that led to his legal difficulties.

A conservative champion, he was an early critic of then-President Bill Clinton, investigating his involvement in Whitewater Development Corp. and fighting so-called Hillarycare in the 1990s.

In the Obama era, Stockman urged the impeachment of then-Attorney General Eric Holder, fought bills restricting guns, tried to sanction Communist China for its mandatory abortion policies, and demanded a proper investigation of the Benghazi, Libya, incident that led to several American deaths, including a U.S. ambassador.

A Politico article from 2013 identified Stockman as “Obama’s No. 1 needler,” and as the then-president’s “most prominent foil.”

Supporters liken Stockman to former House Majority Leader Tom DeLay (R-Texas), who was also convicted and sentenced to prison time for election law violations, but whose conviction was later discarded after an appellate court determined there was a lack of evidence.

Stockman received a 120-month prison term in November 2018 after being convicted by a federal jury in Houston, on 23 counts, among them money laundering, conspiracy, and making false statements in connection with an allegedly long-running scheme to defraud charitable donors. He was also ordered to pay approximately $1 million in restitution for misappropriating charitable funds.

U.S. District Judge Lee Rosenthal, who presided over the trial, reportedly said at the time that the harsh custodial sentence was justified.

“That’s a long time, but Mr. Stockman, I think you earned it,” she said in court.

A prosecutor made a similar statement.

“At trial, the government proved to the jury that former Congressman Stockman ran his campaign and fraudulent charities to simply enrich himself and defrauded well-meaning donors,” Ryan K. Patrick, U.S. Attorney for the Southern District of Texas, said at the time of sentencing. “This type of corruption by public officials gives our entire democratic system a black eye.”

Although comments made by Rosenthal and Patrick, along with mainstream media accounts of the case, are damning, seemingly leaving little room for doubt about Stockman’s guilt, a group of conservative activists, lawyers, former lawmakers, and fundraising professionals say the case isn’t as clear-cut as it has been portrayed.

In fact, they go further, saying in public statements and in a recently filed friend-of-the-court brief that Stockman broke no laws and was the victim of mean-spirited retaliation at the hands of the Obama administration and the political establishment. Laws governing the operation of nonprofits, as well as charitable and political fundraising, were twisted and distorted by prosecutors intent on silencing a loud, effective critic, who spent his time in office functioning as a high-profile whistleblower informing the public of the alleged wrongdoings of the Obama administration.

The new brief reminds the court that fundraising for both nonprofits and for political committees is protected by the First Amendment and that it isn’t a crime to be involved directly or peripherally with both at the same time.

Mark J. Fitzgibbons, in-house counsel for American Target Advertising, which was founded by legendary fundraiser Richard Viguerie, filed a 36-page friend-of-the-court brief with the 5th Circuit Court of Appeals, to support Stockman’s appeal that is in progress.

In an interview with The Epoch Times, Fitzgibbons said that Stockman was involved in fundraising but the fundraising “was 100 percent lawful and the government used complex laws about tax-exempt status” to conflate various activities and mislead the jury, “making them think the political fundraising that had been done was unlawful.”

The government is alleged to have taken normal fundraising practices and distorted them to seem abnormal and unlawful.

The Supreme Court previously ruled, Fitzgibbons said, that “it is not fraud to pay people to solicit contributions, and so the government tried to make the case that paying for the cost of fundraising, travel, and telephone calls … the services of these solicitors was part of the fraudulent fundraising.”

The jury at trial was incorrectly instructed about independent political expenditures, Fitzgibbons said. While a newsletter was published by a nonprofit entity, it didn’t contain what lawyers call “express advocacy,” he said. It “lacked the magic words from Buckley v. Valeo,” he said.

In that landmark campaign finance case, express advocacy was taken to mean urging that a person vote a certain way by employing words or phrases such as “vote for,” “elect,” “support,” “cast your ballot for,” “vote against,” “defeat,” and so on.

“Stockman’s conviction based on fundraising communications involving his associates cascaded into charges of mail fraud, wire fraud, money laundering, and failures to report or file informational and tax returns with the government,” Fitzgibbons wrote in the brief.

“To reach a conviction and this draconian sentence for the outspoken former Congressman Stockman, the Government confused the law governing nonprofit fundraising and campaign finance, and presented its case in a manner that confused the jury.”

If Stockman’s convictions are not undone, it will make it easy to attack people if they are engaged in “ideological, political, or even religious education, discourse, advocacy, and missions,” the brief stated.

“The government’s position would not only severely impede the First Amendment rights of tax-exempt organizations to educate the public and promote their missions, it would smother and extinguish many organizations,” the brief continued.