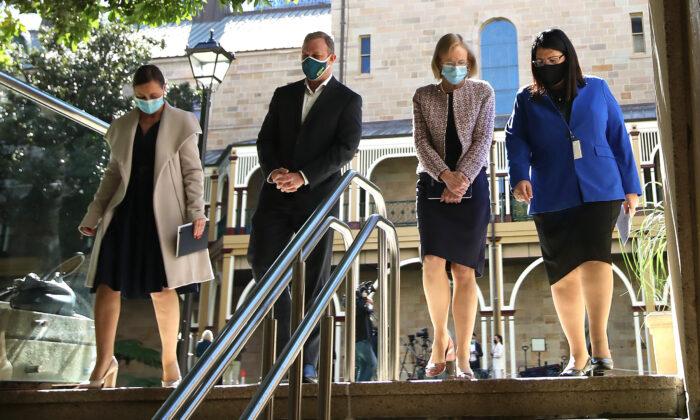 Jessie Zhang
Reporter
Jessie Zhang is a reporter based in Sydney covering Australian news, focusing on health and environment. Contact her at jessie.zhang@epochtimes.com.au.
View profile
Follow
and Victoria Kelly-Clark

Nearly 1,000 school staff in Queensland, including teachers, aides, administration, and cleaners, will have a portion of their salaries cut for 18 weeks as a disciplinary measure for not being vaccinated against COVID-19.

Mandates were handed to teachers, prison staff, and airport staff in Nov. 2021.

Those who failed to comply or provide evidence as to why they should be exempt from having had the first jab by Dec. 17 and the second by Jan. 23, 2022, were suspended without pay.

The requirement ended in June 2022, and staff have been allowed to return to work.

The new pay docking would be the second time the teachers are penalised financially after already being stood down without pay.

Aged Care Minister Anika Wells says it has been a long time coming and should not come as a surprise.

“This is something that the Queensland government is going to have to work through with the very small pocket of teachers given 99 percent is actually vaccinated.”

However, Sara Hocking, a former Queensland teacher affected by the mandates, told The Epoch Times in an email on Aug. 30 that she believed the measures were discriminatory and punitive measure taken to punish teachers.

“It’s a punitive measure taken by the Education Department to punish employees who did not fall into line, ” Hocking said. “They are being singled out because they stood up and asserted their individual right to bodily autonomy. The teachers didn’t fall into step with what the government, their employer, decided they had to do.”

She also criticised Aged Care Minister Anika Wells’s commentary on the situation, saying she had no idea what happens in Queensland schools or how they operate and questioned why the Labor government said vaccinations are a “choice” when people’s livelihoods, homes, families and bodily autonomy was at stake.

“That’s not a choice, that’s called coercion,” she said. ” It’s funny that Labor is an advocate of “my body, my choice” until it comes to this “forced” vaccination.”

Australian social scientist specialising in vaccines, Prof. Julie Leask, said these policies are unlikely to achieve what they are trying to achieve, which is either to encourage vaccination or to ensure that others are protected from the transmission.

“Less restrictive and trust-promoting measures should come first,” Leask and colleagues wrote in an article published in the Medical Journal of Australia.

“Because they are more coercive than other interventions to increase vaccination coverage, mandates demand stronger ethical justification.”

Former foreign minister Julie Bishop said expecting people to still go to work but for lower pay than their colleagues was hard to justify.

“I don’t think it passes any logical test, and it is a penalty they don’t deserve,” Bishop said.

“And I would like to see the medical advice that would support such a penalty imposed on people who, after all, have made a choice,” she said.

While the unvaccinated are frequently blamed for the duration and severity of the COVID-19 pandemic, a recent large-scale international study of those unvaccinated against COVID-19 has found a relatively low hospitalisation rate.

From a pool of more than 20,000 unvaccinated participants from Sep. 2021 to Feb. 2022, the study revealed a hospitalisation rate of 0.4 percent, challenging the many assertions about the burden of the unvaccinated.

Another study published in the Journal of Public Health Management and Practice in May 2021 found an overall hospitalisation ratio of 2.1 percent.