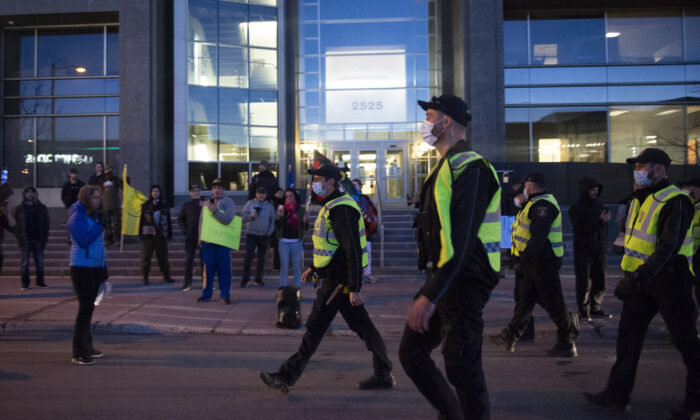 The Quebec government issued tens of thousands of fines to residents for not complying with its pandemic restrictions, but a new report finds that this “punitive” approach did not necessarily slow the spread of COVID-19.

“Québec chose to turn the public health crisis into a public safety crisis, managed with 46,563 police interventions,” concluded the report, conducted by four researchers from the University of Montreal’s Profiling Observatory (l’Observatoire des profilages) and released on March 10.

To put the infraction numbers into context, the authors juxtaposed the figures with the weekly new COVID-19 cases reported. Their analysis showed that the two datasets do not correlate.

The authors cautioned against drawing conclusions between the two datasets.

“It can be assumed that the rationale for issuing statements of offence is to punish and deter those who do not comply with public health rules, in order to reduce contacts and possibly the number of COVID-19 cases,” the report said.

“The data do not make it possible for us to measure the effect, or lack of effects, of the issuance of statements of offence on the number of COVID-19 cases, nor the deterrent effect of the imposition of criminal sanctions on behaviour.”

But the study criticized the Quebec government for relying on police repression and criminal law to force compliance to its pandemic restrictions.

“This stems from a political choice and not from an unavoidable obligation to ‘flatten the curve,’” it said.

The authors added that the “punitive approach and repressive discourse” of pitting the “minority” who were recalcitrant to the measures against the “majority” who complied “have had the effect of stigmatizing part of the population and creating significant division, rather than strengthening solidarity.”

Citing a report by the Canadian Civil Liberties Association (CCLA) and the Policing the Pandemic Mapping Project (PPMP) in June 2020, the authors said Quebec’s pandemic response has been one of the harshest in the country.

The CCLA and PPMP report stated that between April 1, 2020, and June 15, 2020, more than 10,000 tickets were issued or charges laid relating to COVID-19 across Canada, resulting in fines amounting to over $13 million at the time.

The authors cited another report by the two organizations released in May 2021, which stated that Quebec’s rate of infractions was one of the highest among five other provinces from October 2020 to February 2021.