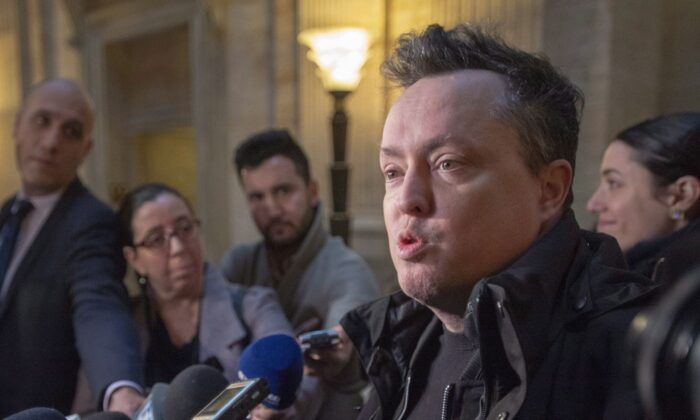 Comedian Mike Ward speaks to the media at the Quebec Court of Appeal in Montreal on Jan. 16, 2019. (The Canadian Press/Ryan Remiorz)
Canada

Decision bodes well for similar decisions to be made by human rights commissions across Canada, says Ward's lawyer
By Lee Harding

Citing a Supreme Court of Canada decision late last year that some welcomed as a win for free speech, the Quebec human rights commission has dropped many cases of alleged discriminatory comments, a precedent that may impact other provinces.

Last October, the country’s highest court ruled 5–4 that jokes by a Quebec comedian mocking a disabled teen singer did not meet the strict standard for proving discrimination under the provincial charter of human rights.

On April 19 this year, the Quebec human rights commission announced that similar complaints are being closed.

“Since its inception, the commission has continually adjusted its approach in response to evolving legal frameworks,” Philippe-André Tessier, president of the commission, said in a press release. “The recent Supreme Court decision fits this evolving context.”

Going forward, the commission will only consider “cases of discrimination, profiling or harassment in employment, housing, public services or legal acts,” or when comments targeting a discriminatory ground also led to discriminatory treatment, “that is, cause prejudice beyond the right to dignity of the individual or to incite others to discriminate on similar grounds.”

James Kitchen, a Calgary lawyer who takes cases for Liberty Coalition Canada as its chief litigator, welcomed the announcement.

“This is certainly a much-needed victory for freedom of expression in Canada,” Kitchen told The Epoch Times by email.

“The courts, including the Supreme Court of Canada, tend to take a low view of the four fundamental freedoms of conscience and religion, expression, peaceful assembly, and association. However, the Supreme Court has shown at least some interest in preventing further erosion of free expression. We saw that with Ward.”

The Supreme Court judges ruled that comedian Mike Ward targeted Jeremy Gabriel, now 25, due to the latter’s fame, not his disability, and that fame was not a protected ground of discrimination under the Quebec charter.

“The Quebec Human Rights Commission, by conforming its decisions and actions to the Ward ruling, is doing precisely as it should—subjecting its political views and agendas to the precedents that are binding on it. This is both a victory for free expression and the rule of law, and the average person is now a little more free to speak their mind, confident that their right to do so is more likely to be upheld,” Kitchen said.

“I’m very pleased, because it shows that the human rights commission is acting responsibly and applying the consequences of the Supreme Court. The Supreme Court is the final court of the land, and its decisions have to be accepted,” Grey said in an interview.

“The court said very clearly that discrimination does not include merely offending or talking,” he said, noting that “obviously, this is a matter in which Canada was divided. And I think it’s very fortunate for freedom of expression, for artistic freedom.”

Although Quebec has a charter of rights unique to itself, Grey says the text of the Supreme Court decision bodes well for similar decisions to be made by human rights commissions across Canada.

“The courts made it clear that they think the jurisprudence is more or less the same, even though the human rights statutes vary slightly from province to province [and federally]. Nevertheless, the same basic principles apply to the law. So I think it should affect the rest of the country.”

The path to this policy change took more than a decade. In 2010, Ward began telling jokes about Gabriel, a teen singer who was born with a congenital disorder marked by skull and facial deformities as well as deafness, and who had gained fame for performing for celebrities like Celine Dion and Pope Benedict XVI. In 2012, Gabriel’s parents filed a complaint with the Commission des droits de la personne et des droits de la jeunesse (Quebec’s human right and youth rights commission).

In 2016, the Quebec Human Rights Tribunal ordered Ward to pay $35,000 in damages to Gabriel. The decision was upheld by the Quebec Court of Appeal in 2019 before being overturned by the Supreme Court of Canada in 2021.

Grey says many who purport to back free speech do not entirely do so.

“Free speech is what I call an orphan value. Everybody believes in it, everybody’s on the side of the orphan, but not in their [own] case. Every group, every lobby is all in favour of free speech, except for the issue which concerns them, so that free speech is constantly under fire because various groups want their restriction,” he said.

“If much speech is forbidden, then people are afraid to speak. There’s a chill effect,” he added.