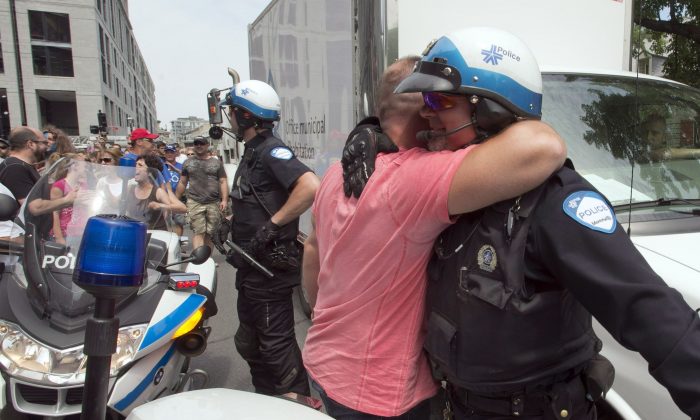 A police officer is hugged by a fellow public sector worker as they protest against proposed pension changes in front of Montreal’s city hall on June 17, 2014. Demonstrators’ raucous protest at city hall on Aug. 20—and the inaction of Montréal police—has drawn condemnation from Premier Philippe Couillard. (The Canadian Press/Ryan Remiorz)
Canada

MONTREAL—Quebec Premier Philippe Couillard has condemned a raucous pension reform protest at Montreal city hall and the perceived inaction of local police as it quickly degenerated.

Couillard called the ransacking at Monday night’s council meeting dishonourable. The premier was equally critical of Montreal police, whose officers appeared to do nothing as demonstrators over-ran city hall and the council chamber itself, tossing papers and plastering the building with stickers.

No amount of anger or disagreement can justify such behaviour, Couillard said Tuesday, Aug. 20.

As hearings into the Quebec government’s proposed municipal pension reform began at the legislature Wednesday, demonstrations continued across the province.

Tensions have been rising as municipal employees, including police officers, firefighters and other city workers have come out in opposition against the proposal to overhaul pension plans.

The government wants contributions and future pension deficits to be split 50-50 between municipalities and unionized workers, a proposal that would entail reworking 170 collective agreements affecting about 22,000 employees.

Parent reminded his officers they are required to maintain peace and security regardless of their personal opinions and that there are not “two classes of protesters.”

Police officers often cracked down quickly on students during their numerous demonstrations in 2012.

One councillor told of being struck while others said they were pelted with water. Coderre recounted being followed as he took refuge in his office. The demonstrators left of their own accord and no one was arrested.

Montreal’s police brotherhood said in a statement that a full investigation is necessary—one that includes what orders police brass gave—before officers are accused of being lax or complacent.

Parent insisted that not all police officers can be lumped together and said video will show some officers did try to act.

However, he added, “Unfortunate incidents have shaken Montrealers’ sense of security.”

“For a lot of people, the events that went on during the city council meeting have raised a doubt regarding the SPVM (police) officers’ ability to do their job in total neutrality and with the professionalism rightfully expected by the population.”

The Liberal government introduced Bill 3, its proposal to overhaul municipal pensions, in mid-June, saying the plans carry a collective deficit of about $3.9 billion and aren’t sustainable in the long term.

Unions dispute those figures and say it’s a cash grab by municipalities looking for labour cost savings and that the government isn’t willing to negotiate.

In the aftermath of the protest, the Montreal firefighters’ union issued a statement appealing for calm from its members after earlier defending their frustration.

In Quebec City, union leaders from outside Montreal told a news conference that incidents like Monday’s only serve to undermine their cause.

Denis Marcoux, head of the federation of public service employees, called the incident “unacceptable” but warned of mounting frustration among his members.