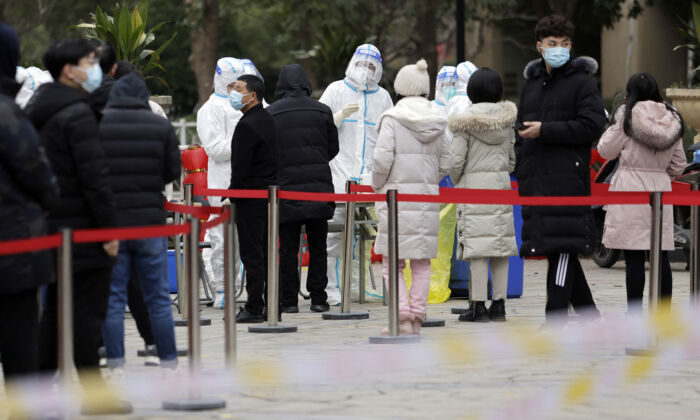 People queue to undergo nucleic acid tests for the COVID-19 in Suzhou, Jiangsu Province, China, on Feb. 16, 2022. (STR/AFP via Getty Images)
INSIDE CHINA

Quarantining measures have continued for many residents of the Chinese city of Wuxi amidst an outbreak of COVID-19.

Wuxi, a city of 7.5 million residents and 80 miles northwest of Shanghai, is an important commercial and trade hub of Jiangsu Province.

According to official city announcements, this wave of the pandemic outbreak began on June 25, when two people from Anhui Province tested positive for  COVID-19, and they spread the disease to colleagues at a construction site in Wuxi.

As of July 4, a total of 145 people have tested positive for COVID-19, and 24 locations have been designated high-risk areas, in which local residents are confined strictly to their households, a Wuxi municipal notice reads.

Public transport routes have been rescheduled, underground shops and gyms, and scenic spots are closed, according to the Wuxi municipal government’s notice on July 3.

Ms. Li (a pseudonym) told the Chinese language edition of The Epoch Times on July 3 that her community is not among the high-risk areas.

“At the moment, we can enter our compound as long as we have a negative PCR test report, but it is difficult for us to go out,” she said. “It’s hard to say what it will be like later.”

The city’s largest leather products shopping mall—Wuxin Leather City, which has a floor space of 30 hectares, has also been closed under the regime’s draconian zero-COVID policies. Those who work, as well as family members, in the leather mall and three other major shopping malls in the neighborhood are being taken to isolation venues in two cities close to Wuxi.

Multiple video clips show Wuxi residents queuing up for buses to isolation centers. They are all dressed up in personal protection gear in the hot summer, carrying luggage with them. Young children can be seen among the crowds.

The Epoch Times cannot verify the authenticity of the video clip or the online notice.

Qi Yu (using an alias for safety reasons) confirmed to the Chinese language edition of The Epoch Times on July 3 that the leather products shopping mall had been shut down and they have been transported to different quarantine hotels.

“The shopping mall is closed, and we have all been isolated to hotels,” Qi said, “There are over 20,000 of us, including the business owners in the mall and our families.”

He said that he has no idea how many of them have tested positive for COVID-19.

The Epoch Times reached out to Wuxi’s health commission, pandemic prevention and control center, and the municipal government on July 4, but the hotlines and numbers were either not answered or could not get through.

The Chinese regime’s zero-COVID policies have created severe hardships for many Chinese people affected by them and sparked concerns about China’s economic growth in 2022. Economists worldwide recently lowered their forecasts for China’s expected GDP growth in 2022.

Hong Ning contributed to the article.