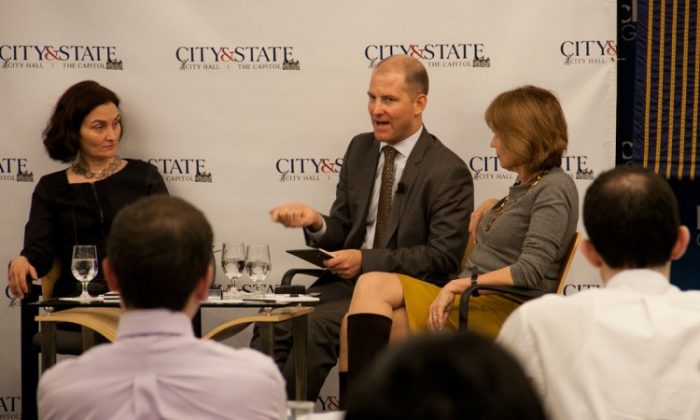 Quality of Life in NYC, Looking Ahead

NEW YORK—The conversation about quality of life in New York City has changed over the years. Crime was the salient topic 20 years ago; education took the spotlight 10 years ago. What is the driving issue of today?

Executive Director of Center for an Urban Future Jonathan Bowles asked civic leaders what they see as the major issue of today, as moderator of a City Living panel hosted by City and State newspaper at Baruch College on Thursday.

The three panelists discussed what they see as most imperative to maintain a high quality of life in New York City. They also talked about paying for that maintenance on a tight budget and gave the 2013 mayoral candidates some advice for the future.

The major quality of life issue of today: Energy infrastructure and climate adaptation

Bystryn’s fellow panelist, New York City Deputy Mayor for Operations Cas Holloway, updated her on what the city is doing to address these concerns.

A natural gas pipeline that would run through the Rockaways in Queens and bring fuel into the city is in the planning process. He noted that no new natural gas supply has come to the city in the last 40 years. While renewable energy is ideal, says Holloway, fuel is necessary for right now.

Retrofitting the city’s buildings also figures big in the city’s sustainability plan since 55 percent of the buildings are over 70 years old. It is also the fiscal responsibility of building owners, not the city, which is a bonus.

The city is also working on several pilot areas, to develop risk models as well as zoning and building code changes for future development. This will help address damage that could occur due to rising water levels and prevent damage.

Advice for the next mayor: Carry through funding for the expansive building projects and sustainability measures already initiated over the last several years under Mayor Michael Bloomberg. She also urges the next mayor to distribute resources equally among all the city’s parks.

Funding: Bystryn’s main concern is that the city undertakes projects without considering the long-term funding necessary to maintain them.

The major quality of life issue of today: Public safety

Holloway warns that although crime has decreased considerably over the years, complacency is dangerous.

“The numbers are so good, that people maybe think, ‘Well … New York City is safe, so check the box and let’s move on,'” said Holloway. He says “keeping a laser-like focus on crime” will be critical to quality of life in the city.

Advice for the next mayor: Holloway did not give explicit advice, but rather highlighted the problem faced by Bloomberg and the next mayor: macro-policy gets bogged down in the regulatory process. He recognizes, nonetheless, the necessity of having community involvement, but notes that the current process consumes a lot of resources.

Funding: Issues like civil servant pensions that may seem disconnected from the lives of most New Yorkers should actually concern everyone, says Holloway, because they will determine whether all the projects that do directly concern the average New Yorker will be funded. It is a question of how resources will be allocated.

He noted that raising taxes seems to be the only way to pay for it all. While some argue raising taxes will drive people out of the city, Holloway says so will a lack of city maintenance.

“Why do people want to live here? Because it’s clean, and it’s safe, and there are good schools and good parks, because the city runs, and it is well-funded,” said Holloway.

The major quality of life issue of today: Maintaining the city’s diversity

Wist was in Washington, D.C., with her 10-year-old son, and “every three blocks he thought we were passing the White House or the same memorial because everything looked the same.” She wants to make sure New York’s cityscape remains a patchwork of different styles and flavors.

The panelists also agreed that a variety of income levels is necessary and New York should not become a “luxury city.”

Advice for the next mayor: Listen to the different voices across the city. While some Brooklyn and Manhattan neighborhoods might want bike lanes or bike share stations, MAS found many people in the Bronx are more interested in a place to play checkers.