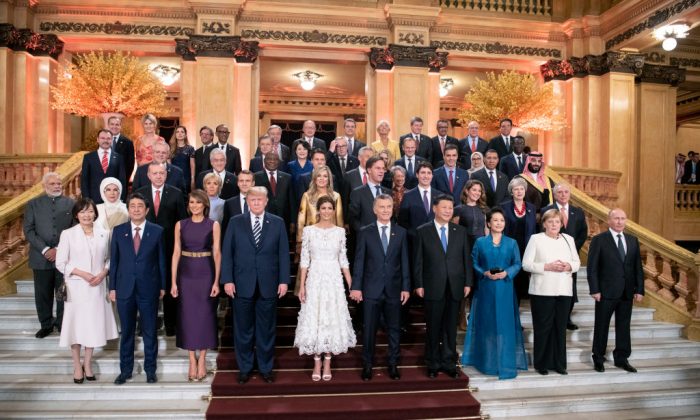 After a bilateral meeting on the sidelines of the G-20 summit in Argentina, U.S. President Donald Trump and Chinese leader Xi Jinping made several trade promises, including a 90-day ceasefire on tariff increases.

However, how many of China’s assurances can actually come to fruition is now under close scrutiny, particularly on the possible revival of U.S. chipmaker Qualcomm’s bid to acquire Dutch rival NXP Semiconductors.

During the meeting, Xi said that he was open to approving the previously unapproved Qualcomm–NXP deal, according to a White House statement on Dec. 1.

The takeover was scuttled after China’s antitrust regulator failed to give its approval by a July deadline, even though eight other regulators in the United States, Japan, South Korea, European Union, and Russia, had cleared the deal.

In Buenos Aires, at a news conference held after the Xi–Trump meeting concluded, Beijing’s top diplomat Wang Yi did not address issues about Qualcomm, according to Reuters.

Xi’s promise was also conspicuously absent from initial coverage of the meeting by Chinese state-run media.

On Dec. 3, Qualcomm, in a statement, made its stance clear. The company said there was no prospect for the acquisition to be revived, according to Reuters.

“While we were grateful to learn of President Trump and President Xi’s comments about Qualcomm’s previously proposed acquisition of NXP, the deadline for that transaction has expired, which terminated the contemplated deal,” an unnamed Qualcomm representative said in the emailed statement.

The combative tone of Chinese state media’s subsequent coverage of the Qualcomm promise revealed that Beijing was in actuality not enthused about the acquisition bid’s potential revival.

Mei Shuin, a researcher at the Chinese Academy of International Trade and Economic Cooperation, an institute run by the Ministry of Commerce, wrote that the Qualcomm issue showed how China has “declared to the world its powers of jurisdiction” in international business deals.

Mei added that since the Sino–U.S. trade dispute commenced, China has been buying from countries other than the United States. Governments and companies should take advantage of that “limited” window of opportunity to enter the Chinese market, Mei wrote. His article was republished by Xiakedao, a social media account affiliated with the Chinese Communist Party’s mouthpiece newspaper People’s Daily.

Any revival of Qualcomm’s acquisition, with or without the latest stamp of approval from Xi, is perhaps unlikely, given that China’s refusal to grant regulatory approval in the first place was more than a business decision—it was widely perceived as a retaliatory and protectionist move by Beijing to prop up China’s domestic tech sector. The failed bid happened just as the U.S. administration announced an escalation of tariffs on Chinese goods weeks prior.

This rationale is confirmed by how Chinese media covered the failed bid then. Chinese news portal Sohu, in an August 2018 editorial, claimed that Qualcomm’s finances would suffer tremendously as a result of its failed acquisition bid—greater than the loss of 8 million yuan (about $1.16 million) suffered by Chinese telecoms firm ZTE in the first half of 2018 as a result of a U.S. export ban. The editorial article stated that such a turn of events proved an old Chinese saying correct: “What goes around comes around.”

In April, ZTE was prevented from procuring U.S. tech supplies after it was found guilty of violating U.S. sanctions on Iran and North Korea. ZTE’s operations came to a halt. The Chinese firm only received a lifeline after agreeing to a U.S. deal whereby the ban will be lifted if ZTE pays $1 billion in penalties and puts another $400 million in an escrow account.

Additionally, the editorial stated that if Qualcomm’s bid were to be approved by Chinese regulators, the U.S. chipmaker would have a monopoly over semiconductors used in auto vehicles. Other companies would put in a less favorable position “in the upcoming era of 5G and IoT (internet of things),” it read. These are technologies that the Chinese regime has aggressively invested in developing domestically so that the Chinese sector could eventually top global competitors.

Countries are currently vying for leadership in 5G, the next generation of wireless mobile technology, because it is seen as critical to economic growth.

Huawei and ZTE have both received significant state funding for their development of 5G technology.

In a recent report issued by the U.S.–China Economic and Security Review Commission, experts warned that the United States may soon lose ground to China in the 5G tech race. According to data from research group LexInnova, Chinese companies hold roughly 7 percent of all global 5G patents as of 2017. However, Western companies are currently in the lead for 5G patent ownership, Qualcomm with the most 5G patents at 15 percent, followed by Finnish firm Nokia with 11 percent, and Swedish company Ericsson with 8 percent.