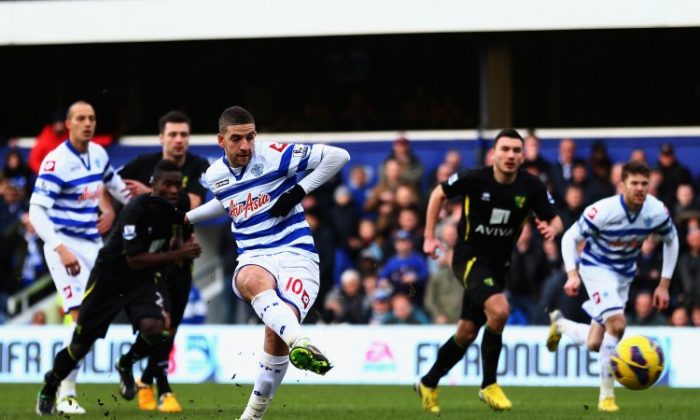 QPR Unable to Finish Off Norwich

Queens Park Rangers fought hard, but was left with another 0–0 draw in Saturday’s Barclays English Premier League lunchtime kickoff at Loftus Road, putting a damper on their survival ambitions.

The visitors on this day, Norwich City, are not of the same ilk as Manchester City and Tottenham Hotspur, and if Rangers are to dig themselves out of trouble they really needed to pick up three points in matches such as these.

“We had our chances to win the game,” said a disappointed new QPR signing Chris Samba in a post-match interview with ESPN. “We had done enough with Andros [Townsend] who has been terrific.”

“We were the better team by far,” Townsend told ESPN.

In the end, the revamped QPR side created more opportunities, but will rue their missed chances such as Adel Taarabt’s penalty being saved by Norwich’s Mark Bunn on a day where the goalkeepers stole the show.

“Both keepers made good saves,” said QPR’s Jamie Mackie. “Our keeper [Julio Cesar] has been on fire of late.”

Rangers are unbeaten in the league this year, with one win and three draws, but still languish four points adrift at the foot of the table.

Prior to the start of this match, Norwich was only seven points above the relegation zone after seven games without a win.

Both clubs crashed out of the FA Cup to lowly opponents last weekend, but achieved credible midweek draws in their last league outings against Manchester City and Tottenham respectively; although let us not forget it was only Norwich’s second point in seven games.

Rangers have been showing a renewed resilience under Harry Redknapp, and the manager would be hoping that the introduction of newly acquired former Blackburn Rovers skipper Samba from Russian club Anzhi Makhachkala would further strengthen the defense, as well as providing an aerial threat at set pieces in the opposition penalty area.

“He’s a big lad, hopefully he can score some goals for us,” Mackie said about Samba.

Townsend was also picked to make his debut, with another new signing, Jermaine Jenas on the bench.

First choice goalkeeper John Ruddy was unavailable due to a thigh injury and so Bunn deputized admirably.

With both teams fearful of the dreaded drop, even with three and a half months of the season still to play, it came as no surprise that the first 45 minutes was a nervous, scrappy affair.

The best moments of the half were produced by QPR’s Taarabt at one end and Norwich’s Robert Snodgrass at the other. Both players were lively and stood out amid a sea of mediocrity. Each had a couple of chances but neither managed to seriously trouble the opposing keeper.

The two teams returned to the field for the second period and immediately showed a much greater resolve to try and win the game.

Samba had not played for six weeks due to the Russian League’s winter break and had struggled to come to terms with the pace of the game in the first half. Yet in the 48th minute he was again up in the opposing area making himself a nuisance, and unlucky not to be awarded a penalty when pulled down.

Five minutes later the visitors showed some intent and Brazilian keeper Julio Cesar pulled off a fantastic reaction save at close range from Wes Hoolahan.

That was the cue for Redknapp to turn to one of the club’s returning long term casualties with Bobby Zamora replaced Shaun Wright-Phillips to form a two-pronged strike force with Mackie.

The result was instantaneous with Mackie being tripped by Norwich keeper Bunn and a penalty awarded. It must have been Bunn’s lucky day because the card was only yellow, he guessed correctly where Taarabt was going to place his kick, and saved it at full stretch low down to his left.

Taarabt endeavored to make amends just six minutes later but his fierce drive from outside the area was palmed away by Bunn. It was end-to-end stuff now and a fine shot from Bradley Johnson was pushed behind for a corner by a flying Julio Cesar.

Back up the other end a few minutes later and a Samba header was cleared off the line by Grant Holt.

Norwich’s last significant attempt was again from Snodgrass whose swerving shot from distance required another top drawer fingertip save from QPR’s Brazilian goalie.

It was all Rangers in the last few minutes as the home side pressed hard for that elusive winner. Zamora headed a ball wide of the post that he would probably have buried when fully match fit and a crisp long range effort from Townsend was well stopped by Bunn.

So no goals and a point apiece, with Chris Hughton no doubt the happier of the two managers. After his team’s debacle against Luton Town in the FA Cup, Norwich at least put in a respectable performance against a determined opponent.

Redknapp knows only too well that a single point against teams such as Norwich is simply not good enough if QPR is going to get out of trouble.

Nonetheless, there are some positives for the bottom club. Samba was clearly not match fit but looked happy to be back in the Premier League after his unhappy sojourn in Russia and several racism rows.

Not only did he last the full 95 minutes, but his performance was more than competent as a more than capable replacement for Nelsen.

Samba’s fellow debutante Townsend was most impressive and Jermaine Jenas, who came on as a substitute in the second half, showed touches of the class we all know he possesses if he can just keep healthy.

“He’s direct, willing to take players on,” Mackie said about Townsend. “That’s what we need.”

Rangers looked a different side going forward after Zamora was introduced, and if they can get Andy Johnson fit as well they might actually manage to score some goals.

“We are at home, we need wins. We’ve got to be positive,” Mackie said. “We’ve got to try and take some positives out of it.”

Norwich is inching towards safety and if they can recapture some of their early season form, when they went 10 games without defeat, they should be fine.

It is going to be a battle for QPR to remain in the top flight, but at least now they appear to have a fighting chance and the fans can justifiably live in hope.