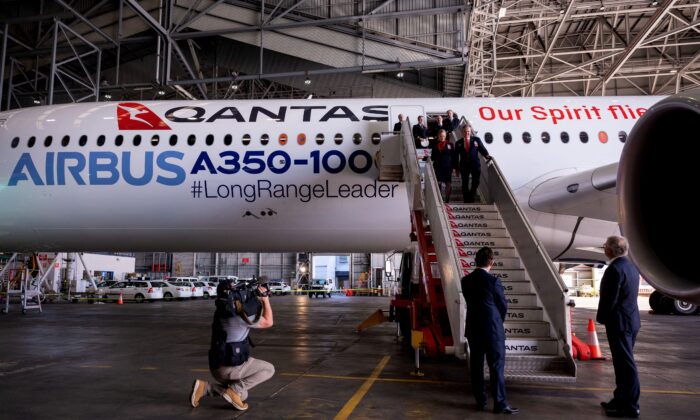 An Airbus A350-1000 aircraft is seen inside a hangar at Sydney international airport in Sydney, Australia, on May 2, 2022. (Wendell Teodoro/AFP via Getty Images)
Australia

Qantas has announced that it will offer non-stop ultra-long distance flights to Australia from international destinations such as London and New York from late 2025.

Under Project Sunrise, the Australian flag carrier is ordering 12 Airbus A350-1000s wide-body aircraft to service the above flight routes. The aeroplanes will be delivered gradually from 2025 to 2028.

“It’s the last frontier and the final fix for the tyranny of distance that has traditionally challenged travel to Australia,” CEO Alan Joyce said in a statement on May 2.

“The cabin is being specifically designed for maximum comfort in all classes for long-haul flying.”

The new aeroplanes to be used by Qantas consume 25 percent less fuel compared to previous generation aircraft and will carry 238 passengers across four classes: first, business, premium economy and economy.

They also have a “wellbeing zone” in the centre where passengers can do stretching exercises and enjoy drinks from a self-service station.

Joyce said that the first Project Sunrise flights would be from New York and London, but non-stop flights to Australia from destinations such as Paris and Frankfurt could also be available.

“It’s superb,” he told Nine Network. “It demonstrates that Australians want to get out and travel again.”

Prior to the coronavirus pandemic breakout, the flight route between Australia and the UK was among Qantas’ most crowded international flight paths.

New South Wales Premier Dominic Perrottet said Sydney’s status as Australia’s only global city was strengthened as Qantas was placing the capital city at the centre of its plans.

“This … will help create 2500 jobs and generate more than $300 million in local economic benefits,” he said.

Before starting Project Sunrise, Qantas had provided non-stop 17-hour flights from Perth to London in 2017.

The national carrier also announced the renewal of its domestic narrow-body fleet from late 2023 with Project Winton, in which the company would replace its Boeing 737 and 717 aeroplanes with 20 Airbus A321XLRs and 20 Airbus A220s.

Meanwhile, Qantas has released its third-quarter trading update, which indicated that demand for domestic travel was going back to pre-pandemic levels earlier than expected.

Similarly, international travel demand was also bouncing back; however, its growth was slower because some markets still remained closed or heavily restricted.

Qantas expected that the company’s underlying earnings for the second half of the 2022-2023 financial year would fall between $450 million (US$317 million) and $550 million.