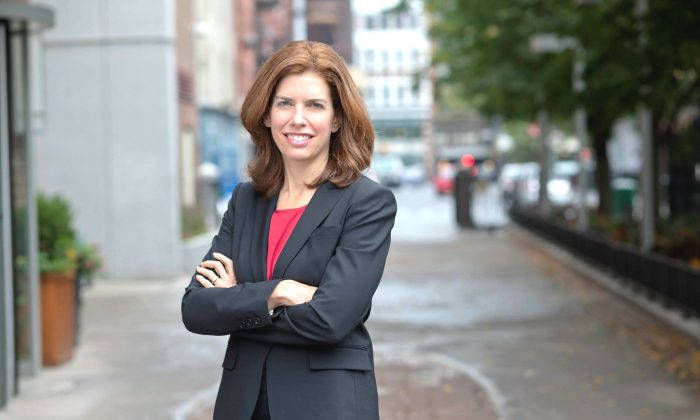 “New York City is the creative capital of the world. There’s no better city to be involved in the media and entertainment world,” according to New York City Commissioner of the Mayor’s Office of Media and Entertainment (MOME) Julie Menin. She could not have defined New York better, with its and unique essence, energy, and everything it has to offer.

In a recent interview, she reflected on her role as commissioner and shared her priorities.

As part of her mandate, she also oversees and manages NYC Media, the official broadcast network and media production group of the city of New York. Its TV station, available on Channel 25, reaches everyday 18 million households with local content and programming. MOME is also dedicated to informing and educating New Yorkers about working in the film, television, theater, and digital media industries, showing us there is absolutely no other place like New York City.

Sibylle Eschapasse: How do you see your role as commissioner of the Mayor’s Office of Media and Entertainment?

Commissioner Julie Menin: As commissioner of the Mayor’s Office of Media and Entertainment, I oversee our work with the film, television, and theater industries, as well as our newly expanded role in the music, advertising, and digital content sectors, and real estate as it relates to the creative industries. We also run NYC Media, the nation’s largest public broadcasting network, comprised of five TV stations and a radio station with a reach of 18 million households. Our focus is to promote these creative industries which contribute nearly $9 billion to the NYC economy, while also increasing access by all New Yorkers to this growing sector.

In total, the industries we cover represent 385,000 jobs for New Yorkers–more than the financial and insurance sectors combined, truly reflecting the city’s diversified economy.

Ms. Eschapasse: What are your priorities and your goals?

Ms. Eschapasse: Can you tell us more about the initiatives you announced?

Ms. Menin: We are proud of the fact that we are the first agency in the country to invest directly in women filmmakers and writers through our five recently announced women’s initiatives, including a script-writing competition for projects by, for, or about women; a $5 million grant for women filmmakers; a new slate of women-focused programming on NYC Media, among other programs.

Since I became Commissioner in February, we have launched a number of initiatives aimed at increasing diversity in the media and entertainment industries. These include “#NominateNYC,” which aims to help New York-based entertainment professionals from diverse backgrounds to be considered for membership in the Academy; the “Made in NY Writers Room,” which offers mentorship opportunities to emerging TV writers who are women or people of color; and a million-dollar grant to CUNY Journalism School to support digital media training for reporters for community and ethnic-focused publications.

Ms. Eschapasse: After a decrease, it seems we go back towards an increase of television and films in NYC. Can you confirm this increase and the impact on the city?

Ms. Menin: Yes, this past season we had 52 episodic series film in NYC, up from 46 the prior year. On the film side, we had 336 films in 2015, up from 242 the prior year. We’re focused on making sure this growth in production includes the  outer boroughs. To that end, since I entered this role in February, we have significantly increased the number of permits issued in the Bronx.

We want to make sure that when production increases, small businesses in our city’s neighborhoods experience the benefits. That is why earlier this year we announced a new model for filming that encourages productions to give crew and staff ‘walkaway lunch money’ instead of catered lunches. This practice provides an infusion of revenue to businesses in the immediate area where filming takes place. We’re also running a series of PSAs highlighting the benefits to small businesses from production in their neighborhoods.

Ms. Eschapasse: What makes NYC so attractive and unique to media and entertainment?

Ms. Menin: There’s simply no place like New York City in terms of its iconic locations and its neighborhoods recognized around the world. New York also offers an incredibly diverse and deep talent pool, which means that TV and film projects can be successful without bringing people in from other locations—including cast, crew, and creative teams.

Furthermore, the Mayor’s Office of Media and Entertainment is a one-stop shop that handles on-the-ground logistics and community relations for productions large and small. Our “Made in NY” marketing program provides qualified productions with free advertising on NYC subways and on bus shelters and phone kiosks around the City.

Ms. Eschapasse: Your office also oversees and manages NYC Media, the official broadcast network and media production group of the City of New York. Can you tell us more about its TV station especially, and also its radio station?

As part of the Women’s Initiative announced in September, we launched a block of women-focused programming, including “Her Big Idea” and “The Vanguard: Women in Media,” two programs focused on New York women trailblazers who have had great success in their careers as entrepreneurs and media professionals.

Ms. Eschapasse: How would you like to see this broadcast network evolve?

Ms. Menin: We are looking at several different ways to enhance NYC Life in the coming year. For instance, we will be airing Columbia University’s prestigious Alfred I. DuPont Awards for Excellence in Broadcast Journalism this coming January, honoring some of the greatest minds in the field of journalism. We are also developing relationships with a number of prestigious and well-respected media brands to broaden our primetime television programming.

Ms. Eschapasse: What is your most memorable experience or memory so far as Commissioner?

Ms. Menin: The most memorable experience for me was announcing our five women’s initiatives. A significant number of women writers and filmmakers in Los Angeles contacted me saying, “I wish that we had these kinds of programs here in LA”—and some of these individuals were former New Yorkers! They told me, “This is why I love New York.”

Ms. Eschapasse: What do you tell people who would like to get involved in the Media and Entertainment in NYC?

Ms. Menin: New York City is the creative capital of the world. There’s no better city to be involved in the media and entertainment world, especially considering how these industries are currently booming.

There are tremendous opportunities to get your foot in the door here in New York. We run a program called the Made in NY PA Training Program that prepares low-income and underemployed New Yorkers for full-time, entry-level work on television and film sets. We also offer internship opportunities through the City’s Ladders for Leaders program. I encourage all New Yorkers to visit nyc.gov/MOME to learn more about our office and the opportunities currently available.

Sibylle Eschapasse is originally from Paris and now lives in New York. She contributes to various publications in addition to be working for the United Nations. Sibylle is also the author of a children’s book, “Argy Boy, A New York Dog Tale.”She may be reached at sibylle.eschapasse@gmail.com