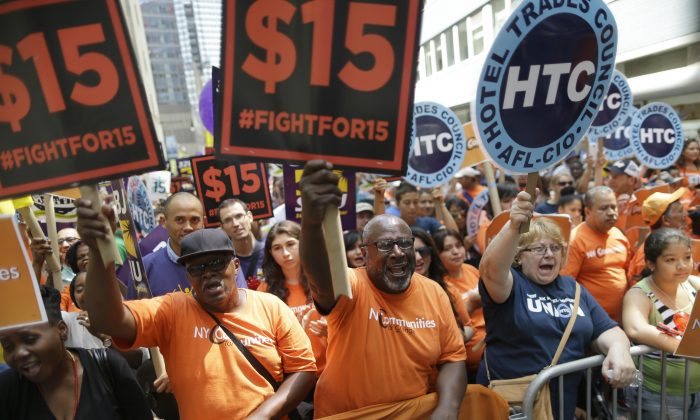 Q&A: Driven by Protests, US Minimum Wage Vaults Onto Agenda

WASHINGTON—The first question in Tuesday’s GOP presidential debate—whether the minimum wage should go to $15 an hour—was the starkest evidence yet that U.S. workers have managed to thrust the issue of pay onto the presidential campaign agenda.

More than six years after the Great Recession ended, weak wage gains have helped fuel movements such as the “Fight for $15,” whose supporters demonstrated outside the GOP debate in Milwaukee. Their efforts follow earlier proposals by President Barack Obama to raise the minimum to $10.10 an hour from its current level of $7.25.

Demands for higher pay may be resonating with more Americans because typical household incomes have been stagnant since the mid-1990s.

Here are some questions and answers about the minimum wage:

That question has been the subject of a nearly religious dispute among economists for years.

One strand of research, spearheaded by economists Alan Krueger and David Card, has concluded that modest increases in the minimum don’t necessarily cost jobs. Krueger and Card compared hiring at fast-food restaurants in New Jersey and neighboring Pennsylvania after New Jersey raised its minimum in 1992 and Pennsylvania did not.

They found that job gains were roughly the same in both states afterward.

Fast Food Workers Strike for $15 Minimum Wage: ‘We do too much’

Job Creator or Job Killer? A Look at the Pacific Trade Deal

Yet the nonpartisan Congressional Budget Office estimated in February 2014 that a minimum wage of $10.10 an hour would lower employment by 500,000 jobs, or 0.3 percent of the nation’s total.

Minimum wage increases also involve other considerations, such as pay levels and poverty. The CBO study found that a $10.10 minimum would lift 900,000 workers out of poverty and boost pay for 16.5 million people.

One area where economists are more likely to agree: Raising the nation’s pay floor involves trade-offs. Many workers will benefit, even as others might have a harder time finding jobs.

At that level, more economists worry about job losses. Krueger, in fact, wrote in October that a $15 minimum “would put us in uncharted waters, and risk undesirable and unintended consequences.”

But outside high-cost urban areas, a $15 minimum would be a heavier lift for many businesses. The median hourly wage in eight states is below $15. (The median is the midpoint between the highest and lowest pay levels.)

Still, there is no consensus view. The University of Chicago’s Booth School of Business asked more than 40 economists if raising the minimum to $15 an hour by 2020 would “substantially” eliminate jobs for low-wage workers. About 40 percent said they were uncertain, while the rest were split.

Is the minimum wage the same across the country?

No. In recent years there has been a flood of states and cities that have raised theirs higher than the $7.25 federal level. Twenty-nine states and Washington, D.C. now have wage floors above the federal minimum. Most are between $8 and $9.50 an hour.

The push for $15 also highlights the different impacts it would have around the country. The Pew Research Center has calculated what minimum wage would be needed in different cities to maintain the same standard of living as $15 in New York. They found that it would require $13 an hour in Chicago, $12 in Fresno, California, and $10.43 in Anniston, Alabama.

What chances does the $15 minimum have to become law nationwide?

Not great. Republicans in Congress are generally opposed to Obama’s call for a $10.10 minimum. And many congressional Democrats support lifting it to $12 by 2020.

Voters in four conservative states—Alaska, Arkansas, Nebraska and South Dakota—approved higher minimums in referendums last year, but all were below $10.

In elections just last week, voters in Portland, Maine, shot down a $15 minimum. So did voters in Tacoma, Washington, though they approved a separate measure that would gradually raise it to $12.

How much public support is there for higher minimums?

Pretty broad support, actually. A survey by the Pew Research Center in early 2014 found that nearly three-quarters of the public was in favor of a $10.10 minimum. A survey by Hart Research Associates for the National Employment Law Project, an advocacy group, found that 63 percent of Americans support a $15 minimum.

What do the presidential candidates say?

On the Democratic side, Vermont Sen. Bernie Sanders is in favor of a $15 minimum. But the Democratic front-runner, Hillary Clinton, backs a $12 wage floor.

When the question was raised at the Nov. 10 GOP debate, Donald Trump and Ben Carson said they opposed a higher minimum. Most other GOP candidates agree. But Rick Santorum, a long-shot candidate, said in September that he supported a rise to $8.75 an hour.