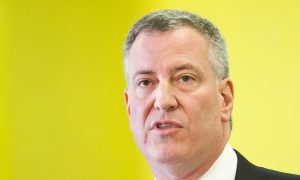 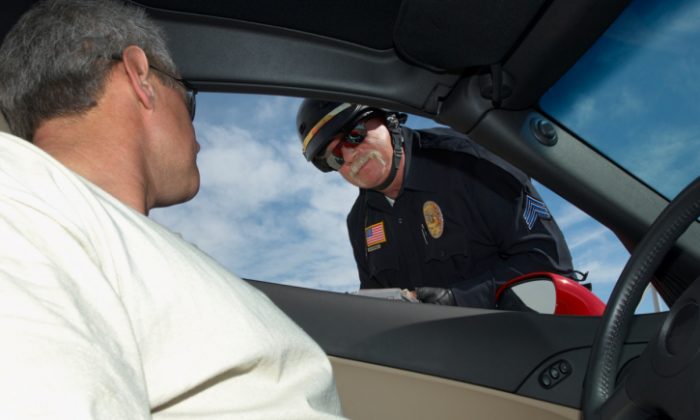 A file photo of a police officer speaking with a driver. (Moodboard/Moodboard/Thinkstock)
US

Putting the Right of Privacy on Hold for 2 Minutes?

WASHINGTON—On Jan. 21, the Supreme Court heard Rodriguez v. United States, the case that may settle how long and under what circumstances a law enforcement officer can reasonably delay you at a traffic stop.

The high court’s decision may also clarify some thorny issues concerning constitutional rights under the Fourth Amendment of the U.S. Constitution, which ensures privacy and prohibits unreasonable searches and seizures. The Fourth Amendment also requires that law enforcement have a warrant for a search based on “probable cause” that the law is being violated.

Here are the particulars of the case.

One evening in Nebraska in 2012, Officer Morgan Struble spotted a vehicle swerving off the shoulder of the road and jerked back. He stopped the vehicle, driven by Dennys Rodriguez, who said he was avoiding a pothole. Struble grew suspicious at the answers he was getting from Rodriguez and his passenger, and the air freshener he smelled, according to Rory Little of Scotusblog. He did the routine checks on identification and auto registration and then decided he should have his narcotics-sniffing dog check for illegal drugs. Struble is a canine police officer who, as it happened, had his dog with him. But before doing the dog sniff, he called for a backup officer for safety reasons.

Struble returned to the vehicle, handed Rodriguez a warning citation, and then asked if he could do a dog sniff check. Rodriguez said no, upon which Struble ordered him out of the vehicle. They waited about 6 minutes for the backup to arrive. Then Struble’s dog circled the car, which took no more than two additional minutes, and discovered a bag of methamphetamine. Thus, the elapsed time added on to the traffic stop was 7 or 8 minutes to an already 21 minute traffic stop.

No one questions Officer Struble entitlement to make a traffic stop of Rodriquez, based on his erratic driving. But the issue is, “after completing the task related to a traffic stop, whether an officer without individualized suspicion, can hold the driver for a dog sniff,” said Shannon O’Connor, who spoke on behalf of Rodriguez.

“It’s only a violation of the Fourth Amendment for two minutes, right?”
— Chief Justice John Roberts

To be precise, Officer Struble had a hunch that something was amiss based on his conversations with Rodrigues, but lacked “probable cause” to conduct a search of the vehicle. He would need his dog’s help to get that.

O’Connor argued that once the mission related to the traffic stop was complete, the investigation should have ceased, and should not have extend even 30 seconds longer, let alone 8 minutes longer. “In order for the driver to continued to be detained, there must be a new justification or consent, which you did not get in this case … you must let the driver go … you are finished with the traffic stop,” he said.

On the whole, the Justices didn’t seem too pleased with this formulation of the issue.

Justice Anthony Kennedy asserted, “The problem is, how do you define the ‘traffic stop’?”

The Court Justices indicated that the traffic stop mission is not easily defined. It includes perhaps checking identification, registration, prior arrests, whether the vehicle is stolen, et cetera. These may have nothing to do with the erratic driving for which Struble stopped Rodriguez, but are an accepted part of the traffic stop.

Justices Samuel Alito and Ruth Bader Ginsburg asked how checking for arrest records, and other extraneous inquiries, is any more related to the traffic stop than the dog sniff. Could a dog sniff be part of that accepted protocol? Justice Antonin Scalia entertained the idea aloud that it could become a routine part of a traffic stop.

In the end, the Justices seemed to agree that a dog sniff falls in a different category outside the normal traffic stop. Later, counsel arguing for the government side agreed that the dog sniff should not be considered part of an ordinary traffic stop.

Arguing for the government side, Ginger Anders said that so long as the dog sniff does not unreasonably prolong the stop time, it should be constitutional.

“If the dog sniff takes any time, then the intrusion we’re talking about is the incremental delay. It’s a temporal intrusion.”

Once there is probable cause to make the stop, and do legitimate inquiries, there should not be any problem in performing a dog sniff or other investigations, during that time, so long as it doesn’t unreasonably prolong the stop and delay the person, she said.

“[The Fourth Amendment] says you can’t search unless you have probable cause to search.”
— Justice Sonia Sotomayor

“We don’t think that a dog sniff performed right after the ticket per se unreasonably prolongs the stop,” Anders said.

Scalia seemed to support the reasonableness notion with comments like, “It can prolong [the stop] a little bit.” And that it only takes the dog two minutes which is not unreasonable, Scalia said.

Chief Justice John Roberts went to the heart of the whole issue retorting, “It’s only a violation of the Fourth Amendment for two minutes, right?” (Laughter)

Roberts was worried about the “incremental” increase in time if the dog were not immediately available as it was in this case. “I’m not sure—it’s hardly ever going to be reasonable,” he said.

The Fourth Amendment a ‘Useless Piece of Paper’?

Justice Sonia Sotomayor, said, “[The Fourth Amendment] says you can’t search unless you have probable cause to search.”

However, Anders reminded the Court that the dog sniff in itself does not constitute a search requiring a warrant. The exception would be a dog working outside the door of one’s home.
Indeed, in 2005, the Court ruled in Caballes that a dog sniff conducted simultaneously with a traffic stop does not violate the Fourth Amendment, according to Little.

However, Justices Stephen Breyer, Sotomayor, and Elena Kagan all expressed concern that the Fourth Amendment may be rendered meaningless in this situation if the traffic stop is used as a pretext for conducting new investigations.

Justice Kagan said that just because the police have a right to pull you over for a traffic stop, shouldn’t mean that they are entitled to question the person about other law enforcement matters. Once the objective basis of the stop is concluded that should be the end of it. She agreed we want the police to catch more criminals, but “then the Fourth Amendment becomes a useless piece of paper.”

The Court’s decision is expected in June.