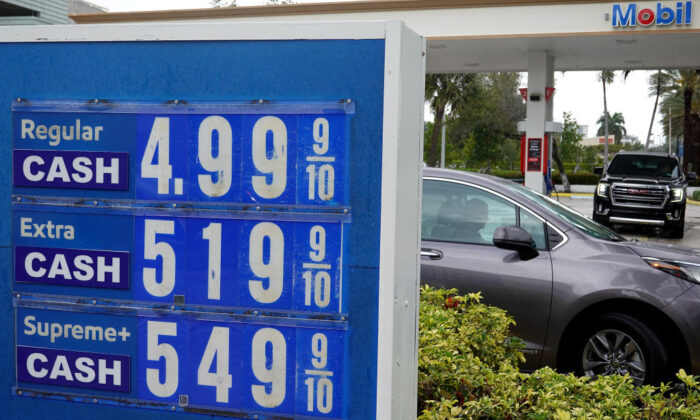 A sign reflects the price per gallon of fuel in a March 2022 file photo. (Joe Raedle/Getty Images)
Inflation

While Russian President Vladimir Putin’s invasion of Ukraine exacerbated inflationary pressures, particularly on food and energy, many market analysts believe the root causes of soaring prices have more to do with fiscal and monetary expansion in Washington than the conflict in Eastern Europe.

According to Luke Tilley, chief economist at Wilmington Trust, inflation is at its highest level in four decades owing to “massive” government stimulus, and unusually accommodative monetary policy from the U.S. central bank, as well as COVID-19-induced spending on goods and supply chain problems.

“Inflation is incredibly challenging to predict,” he told The Epoch Times. “We have departed from any normal course that we’ve seen in history.”

Historical examples are not very helpful, Tilley noted, because “in those historical examples, we do not have a pandemic that is shutting down supply chains and production. We also do not have the same kind of massive, absolutely massive fiscal stimulus direct to consumers’ wallets that we had in 2020 and in 2021.”

Scott Sheridan, a market expert and CEO of tastyworks, an online brokerage services firm, echoed these thoughts, telling The Epoch Times that “it’s a much more nuanced conversation than typical inflation discussions we’ve had in the past.”

Global supply chain issues and changes in spending patterns as a result of the COVID-19 pandemic have driven up inflation globally. However, since the first half of 2021, inflation in the United States has been surpassing inflation in other developed countries.

The Federal Reserve Bank of San Francisco recently published an “Economic Letter” that explored why inflation is higher in the United States than the average rate in Organisation for Economic Co-operation and Development (OECD) countries, like Canada and the United Kingdom (pdf).

“Inflation rates in the United States and other developed economies have closely tracked each other historically,” Fed economists said in the report.

The economists alluded to the $2.2 trillion CARES (Coronavirus Aid, Relief, and Economic Security) Act that was signed into law in March 2020 and the $1.9 trillion American Rescue Plan Act of 2021 that was enacted a year later.

“Both Acts resulted in an unprecedented injection of direct assistance, with a relatively short duration. In contrast, real disposable personal income for our OECD sample increased only moderately during the pandemic,” the report authors noted.

Financial relief might have been necessary to cushion the economic blows from the pandemic, but there were always going to be “consequences,” Sheridan notes.

“Not that I disagree the stimulus was needed, but I think most of us recognized at some point there would be consequences. Once you add in the implications of COVID and the current war in Ukraine, frankly I think you’d be hard-pressed not to see inflation upticking,” he said.

Despite the plethora of signs of rampant price inflation that popped up throughout 2021, the enormous price growth that has transpired over the last 12 months has “surprised many economists’ expectations,” said Mark Gardner, president of wealth management company Retire Well Dallas.

Although the Fed and the Biden administration are projecting lower inflation toward the end of 2022, Gardner said Americans may need to prepare themselves for elevated prices.

“So brace yourself, as price increases will be present throughout this calendar year,” he told The Epoch Times. “Still, they will vary by category—the cost of items in bottles and cans will continue to rise before they come down due to the limited availability.”

The Federal Reserve has two missions: to contain inflation and to maximize employment. While the central bank has moved into inflation-fighting mode, some analysts believe the impact will be felt over time. They anticipate it will take years to restore inflation to the target rate of 2 percent.

William Stack, the owner of Stack Financial Services in Missouri, feels that numerous components of inflation are now out of control, including new lockdown measures in China and a slowdown in domestic truck shipments.

“The Federal Reserve will be hard-pressed to manage inflation in this environment, which they ironically helped create,” Stack told The Epoch Times.

The consensus that inflation will remain hot has some Federal Reserve officials urging the central bank leadership to act quickly and be more aggressive to make sure the institution isn’t behind the eight ball.

St. Louis Fed Bank President James Bullard recently stated that he wants to see the benchmark fed funds rate at 3.5 percent by the end of 2022.

That said, it’s “unfair” to accuse the Fed of losing control over inflation and being behind the curve, explains Robert Johnson, a professor at Creighton University’s Heider College of Business and the CEO of Economic Index Associates.

“A combination of the supply chain disruptions as a by-product of the pandemic and the pressures on commodity prices caused by the Ukraine conflict have caused inflationary pressures,” Johnson told The Epoch Times. “It would be unfair to suggest that the Fed has ‘lost control’ over inflation or that the Fed is ‘behind the curve’ in fighting inflation, given the weakness in the economy as a result of the coronavirus pandemic. In essence, the Fed was dealt a very difficult hand and is attempting to thread the needle in terms of ensuring full employment and fighting inflation.”

Last week, minutes from the March Federal Open Market Committee (FOMC) revealed that the central bank is ready to raise rates by 50 basis points at next month’s two-day policy meeting and trim the $9 trillion balance sheet by $95 billion per month.

According to the CME FedWatch Tool, most of the market is penciling in half-percentage-point increases at the May and June FOMC meetings.