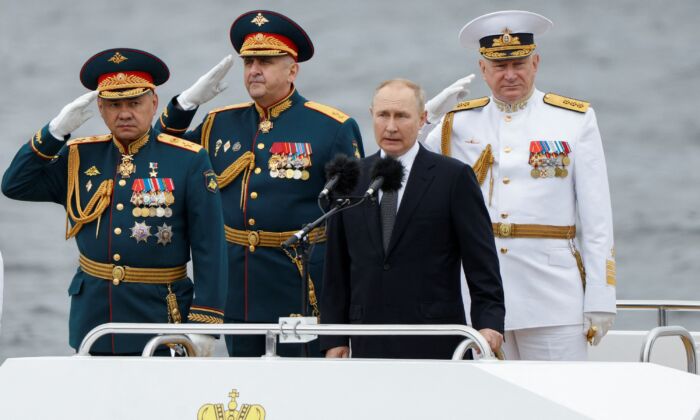 NATO and the United States are Russia’s main maritime threats, according to an updated naval doctrine signed by President Vladimir Putin on July 31.

The Russian president signed the doctrine during Navy Day celebrations in St. Petersburg where he also said Russia’s navy will soon be equipped with powerful “Zircon” hypersonic cruise missiles.

During a lengthy speech at the celebrations, Putin also praised Tsar Peter the Great for helping to make Russia a great sea power and increasing its global standing, while noting that Russia will be bolstering its navy’s operational capabilities in an effort to protect national security and its interests in the ocean.

The new 55-page doctrine (pdf) identifies the Arctic, Black, Okhotsk, and Bering seas, as well as the Baltic and Kuril straits, as areas of “national interest,” which the Russian president said are economically vital and strategic.

Upon signing the new decree, Putin vowed to protect Russia’s borders “firmly and by all means.”

According to the doctrine, America’s “course towards dominance in the World Ocean” and NATO’s movement closer toward Russia’s borders are major security threats to Russia.

“The major challenges and threats to the national security and the sustainable development of the Russian Federation related to the World Ocean are: the U.S. strategic course towards dominance in the World Ocean and its global influence on international processes, including those related to the use of transportation lanes and energy resources of the World Ocean,” according to the newly-signed document, translated by the state-run Tass news agency.

Meanwhile, “NATO’s plans of moving its military infrastructure close to the Russian borders and the alliance’s attempts to assume global functions” continue to be “unacceptable” to Russia and “remain a determining factor in its relations with NATO,” the document reads.

Elsewhere on Sunday, Putin stressed that the navy’s ability to respond to threats with “lightning speed” was key to protecting Russia’s sovereignty and freedom, adding that the country’s naval capabilities are “constantly being improved.”

The president also vowed that Russia’s navy would receive “Zircon” hypersonic missile systems within the next few months and the frigate Admiral Gorshkov will be the first to be fitted with the weapons.

Hypersonic weapons can travel at nine times the speed of sound. Russian officials have confirmed that the nation’s navy has conducted a number of test-launches of the Zircon from warships and submarines over the past year.

The location of their deployment would depend on the “interests of ensuring the security of Russia,” Putin said.

It also acknowledges that Russia currently does not have enough navy bases globally.

“Guided by this doctrine, the Russian Federation will firmly and resolutely defend its national interests in the world’s oceans, and having sufficient maritime power will guarantee their security and protection,” the document said.

The new doctrine is effective immediately.

During his speech on Sunday, Putin did not mention Russia’s ongoing invasion of Ukraine, although the newly-signed doctrine does envisage a “comprehensive strengthening of Russia’s geopolitical position” in the Black and Azov seas.