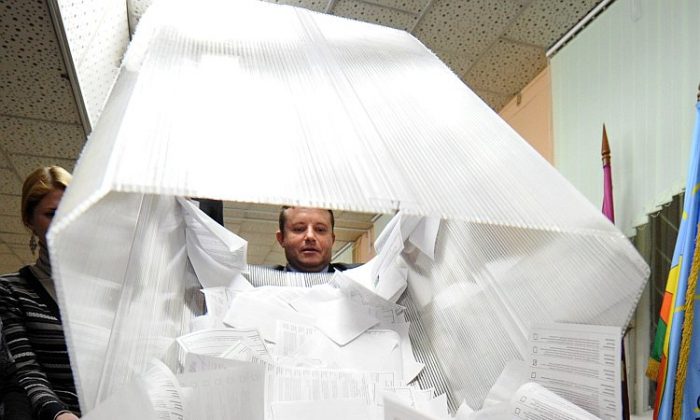 Dmitri Trenin is director of the Carnegie Moscow Center. His latest book is "Post-Imperium: A Eurasian Story." (Gary Feuerberg/ The Epoch Times)
Europe

WASHINGTON—Vladimir Putin easily won a third presidential term on Sunday, garnering almost 65 percent of the vote (with 90 percent of ballots counted at press time)—well above the 50 percent he needed to avoid a runoff round.

His nearest rival, communist Gennady Zyuganov was at about 17 percent.

There was never any doubt that Putin, who has been premier during his four-year hiatus from the presidency, would top 50 percent on the first ballot. Having to face an opponent in a runoff would be seen as weak, said Russia observers.

The opposition charges that voting violations were widespread in favor of Putin’s United Russia party, just as they were in last December’s parliamentary polls. That election triggered unprecedented protests in the country, bringing tens if not hundreds of thousands of people into the streets in the big cities like Moscow and St. Petersburg.

Alexei Navalny, Russian dissident blogger, vowed that protests will continue after the election. On PBS “NewsHour,” Feb. 29, he said, “I do not know what the scale of the protest will be, but the fact that it will continue is quite obvious. It doesn’t matter how they count the votes, because all candidates should have been able to participate in the elections.”

Navalny is known for targeting corruption on his blog; he has emerged as a popular spokesperson among the social networks that is fueling the opposition movement.

“All resources are being brought to assure Putin victory on the first ballot,” said Dmitri Trenin, a Russian citizen and director of the Carnegie Moscow Center, in the last days of the campaign. He was a guest speaker at the Carnegie Endowment for International Peace.

The Kremlin dominates television coverage—the predominant medium in Russia—and so Putin had far more exposure than the other presidential candidates.

Petrov, a severe critic of Putin, said that Putin needed “to demonstrate to the political elite and the people that he is still the uncontested national leader and can win in the first round.”

Putin’s election rivals who were allowed to run were very weak competition—billionaire Mikhail Prokhorov, Communist Gennady Zyuganov, ultranationalist Vladimir Zhirinovsky and former Upper House speaker Just Russia leader Sergei Mironov. Except for Prokhorov, all had run for president before and have shown themselves incapable of mustering significant support.

Vladimir Ryzhkov, former member of the Duma speaking on PBS “Newshour,” called the challengers “phony competition” that Putin selected himself. No one from the real opposition was permitted to register, he said.

Putin is still a very appealing figure to many Russians. If Russia’s new urban middle class is less enamored with Putin, he can count on his base of support from the lower classes that he champions. For example, he refused to raise the pension age, and has been given credit for Russia’s growing economy.

In recent months, Putin has been trying to promote himself as a reformer. To this end he issued about a half dozen major studies under his signature that laid out his vision for Russia. The articles were about general strategy, ethnic relations, the economy, national security, and foreign policy. Trenin surmised the articles were prepared by Putin’s staff with help from academic contributors.

A lot of what is offered in the articles “make sense,” Trenin said, but it’s “strange that it comes from someone who has been in power for the last 12 years.”

Trenin asked, “Does Putin have people to implement these policies?” Trenin doubts he does. “Now there is a realization that the oldies should be on their way out and will be out.”

Since December, Putin and his party have had to contend with an urban middle class that demands a freer Russia and an end to state corruption.

Putin’s image was tarnished on Sept. 24, when he and President Medvedev announced that they were trading places. Medvedev was eligible to run for a second presidential term, but instead had worked out an arrangement with Putin that he would step down and Putin would run again for president. When Putin had to step back after reaching his two-term limit in 2008, Medvedev was his handpicked successor.

The announcement was “evidence that they held their citizens in full contempt, especially when Medvedev, lamely, added that their decision to switch offices had been made long ago,” wrote the Moscow Center’s Maria Lipman and Nikolay Petrov for Foreign Affairs, Feb. 9.

Next came the apparent rigging of the parliamentary election in early December. Lipman and Petrov point to the Moscow mayor, who was eager to demonstrate his loyalty, but was up against “Moscow’s educated and critically minded constituency.”

“Election observers reported episodes of ballot stuffing and of local precinct officials rewriting the voting records in favor of United Russia. According to various estimates by independent civic groups, the actual support of the United Russia in Moscow was around 30 to 35 percent. … But in the final tally, Moscow election officials reported that 46 percent of the vote went to United Russia.”

Tens of thousands of people, up to 200,000 in Moscow, braved the bitter cold chanting “Putin, go!” and “Russia without Putin.” Twelve years of Putin is enough, they said.

When the first huge demonstration in Bolotnaya Square took place on Dec. 10, Trenin said he was “keeping his fingers crossed it would not come to clashes.” The police, who are notorious for roughly handling protesters, “were exceedingly polite on that day and have continued to be polite until this very moment.”

The authorities made some concessions. They reinstalled the direct election of governors, and they made registration for political parties easier. Certain members of the liberal opposition—but not all—were allowed to speak on television on talk shows, for example, Boris Nemtsov and Vladimir Ryzhkov.

Still, before the protests in December, Putin was on his way unhindered to a third term as president, and people talked about what Putin could accomplish in two more terms—12 years. Now, many observers, including Trenin, say his legitimacy has been so undermined, that they have doubts that he will even complete a six-year term.