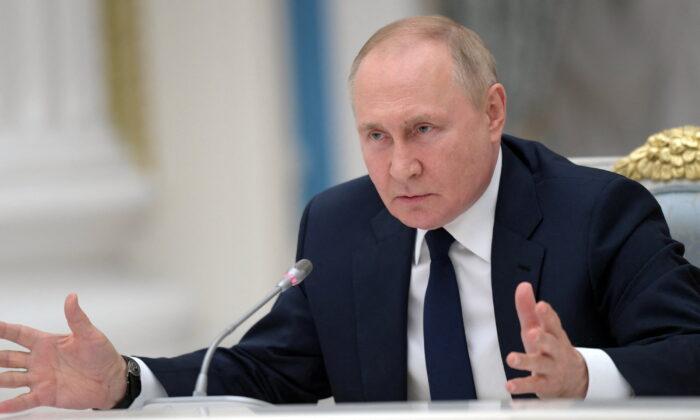 LONDON—President Vladimir Putin warned the West on Friday that continued sanctions against Russia over the war in Ukraine risked triggering catastrophic energy price rises for consumers around the world.

Putin, who casts the sanctions imposed on Russia as a declaration of economic war, said that Western calls to reduce reliance on Russian energy had made global markets “feverish” with spikes in oil and gas.

European Union customers have said they want to wean themselves off Russian gas while Group of Seven (G-7) leaders said last month that they wanted to explore “price caps” on Russian fossil fuel, including oil.

“Sanctions restrictions on Russia cause much more damage to those countries that impose them,” Putin told the leaders of Russia’s oil and gas industry, including Rosneft Chief Executive Igor Sechin and Deputy Prime Minister Alexander Novak.

“Further use of sanctions may lead to even more severe—without exaggeration, even catastrophic—consequences on the global energy market.”

Putin’s Feb. 24 invasion of Ukraine and the West’s imposition of the most severe sanctions in modern history have undermined the assumptions of the energy and commodities markets.

With prices already rising, the world is bracing for further supply disruption from Russia: The Nord Stream 1 pipeline under the Baltic, a vital supply route to Germany, is due to undergo maintenance from July 11 to July 21.

Gazprom cut capacity through the pipeline to just 40 percent, citing the delayed return of equipment being serviced by Germany’s Siemens Energy in Canada due to sanctions.

The Caspian Pipeline Consortium (CPC), which carries about 1 percent of global oil, was ordered by a Russian court to suspend operations on Tuesday. Flows continue, but it is unclear for how long.

In the last few months, Russia has cut off gas flows to Bulgaria, Poland, Finland, Danish supplier Orsted, Dutch firm Gasterra, and Shell for its German contracts, after they all rejected a demand to switch to payments in roubles in response to European sanctions.

Putin said that the West’s economic “blitzkrieg” had failed but admitted damage had been done to the $1.8 trillion economy.

“We should feel confident in ourselves but you should see the risks—the risks are still there,” Putin said.

Putin said the situation on the Russian fuel and energy sector remained stable, citing an increase in oil and gas condensate output to 10.7 barrels per day in June.

But he said Russian energy companies should prepare for an EU oil embargo set to come into force around the end of the year.

“The government is currently considering options to develop the railway and pipeline infrastructure to supply Russian oil and oil products to friendly countries,” Putin said.