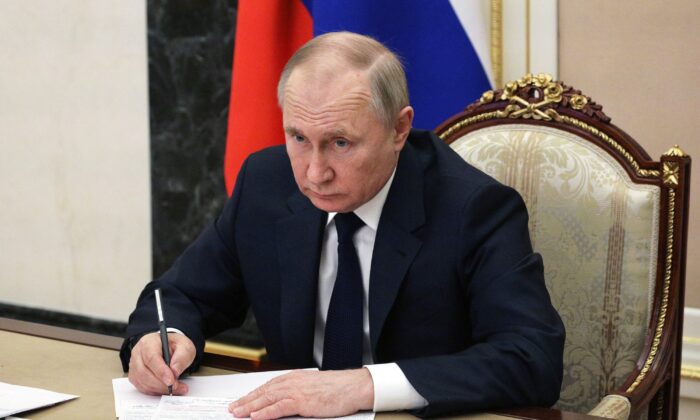 Russian President Vladimir Putin chairs a meeting with members of the Russian government in Moscow, on March 10, 2022. (Mikhail Klimentyev/Sputnik/AFP via Getty Images)
Commodities

Russian President Vladimir Putin has warned that any attempts to prevent exports of fertilizers, oil, gas, and metals will have “serious consequences on this segment of the world market and for food in general.”

Putin made the comments at a meeting with government members on March 10, according to the Russian state-run news agency TASS.

The president also doubled down on his support for comments made by Russia’s Industry and Trade Minister, Denis Manturov, who previously said that Russia would redirect exports to other countries that were not hostile to Russia if problems with “logistics” were to continue after claiming that European carriers are not loading Russian products on their ships.

Unfriendly countries to Russia include the United States, Canada, and member states of the European Union, among others.

“This obstruction of supplies concerns energy carriers, oil. Of course, it concerns gas, including liquefied gas. This also concerns fertilizers and some other goods, metals, and so on, chemical products in the broad sense of the word. As for fertilizers, then, of course, if this continues further, it will have serious consequences for this segment of the world market and for food in general,” Putin said, according to TASS.

Putin added that any attempts to interfere with the supply of Russian products will also negatively impact the global economy.

“It will also affect macroeconomic indicators because inflation is inevitable in this case,” Putin said.

On Thursday Russian Industry Minister Denis Manturov announced that Russia has temporarily banned fertilizer exports to countries it deems hostile to Moscow, according to Firstsquawk.

The Epoch Times has been unable to verify if Russia has banned fertilizer exports and has contacted the Minister of Trade and Industry for comment.

Russia’s ministry previously recommended that the country’s fertilizer producers halt exports, citing uncertainty as to whether these exports would reach foreign markets.

“Taking into account the current situation with the work of foreign logistics operators and the risks associated with it, the Ministry of Industry and Trade of Russia was forced to recommend to Russian manufacturers to temporarily suspend the shipment of Russian fertilizers for export until the carriers resume rhythmic work and provide guarantees for the fulfillment of export deliveries of Russian fertilizers in full,” the ministry said in a statement.

Russia produces 50 million tons of fertilizers every year, accounting for 13 percent of the world’s total, according to Reuters.

The country is also a major producer of potash, phosphate, and nitrogen-containing fertilizers which serve as major crop and soil nutrients.

Amid Russia’s invasion of Ukraine, the cost of fertilizer has already risen significantly across the globe and is expected to further impact the cost of goods and push food prices higher.

However, even before the invasion, fertilizer prices had risen drastically in part due to the rising gas costs which are needed to ship fertilizers across countries and continents.

On top of this, a reduced amount of natural gas, which is a key ingredient in making nitrogen-based fertilizers, forced some producers to reduce production and in some worse cases, completely halt it.

Peter Zeihan, a geopolitical analyst and author, told FOX Business that the world was on the verge of “the worst fertilizer situation in modern history in terms of supply” before the invasion of Ukraine.

“All three source materials that go into fertilizer (phosphate, nitrogen, potash) are subject to abject shortage. And even if the war were to stop tomorrow, it’s already too late. It’s too late for the planting season for the Northern Hemisphere this year,” Zeihan said, adding that the crisis could potentially hit Brazil, Africa, the Middle East, and South Asia the hardest.

These nations, he said, would likely not see enough yields that are “necessary to support the global population.”

“And as food prices rise, as they’ve been for the last two weeks—and pretty sharply—farmers will do what farmers do. They will plant what they think that they can grow for the greatest bang for their buck,” Zeihan said. “So, I can see (the United States) increasing our production and our exports by a small amount. But the scale of what we’re talking about here is insufficient food for hundreds of millions of people.”

Meanwhile, Ryan Jacobsen, Chief Executive Officer at Fresno County Farm Bureau, has warned that there’s a strong possibility that there is simply “not going to be enough on the worldwide market.”

“Let alone with the prices, you just won’t be able to find it,” Jacobsen told ABC30. “We are early in the season,” Jacobsen added. “There is still a lot of growing to come, so we are expecting this to compound as we go farther on.”

The fertilizer ban comes after the West levied heavy sanctions on Russia in recent weeks in response to what Putin calls a “special military operation” in Ukraine.