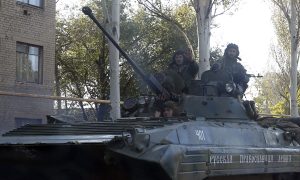 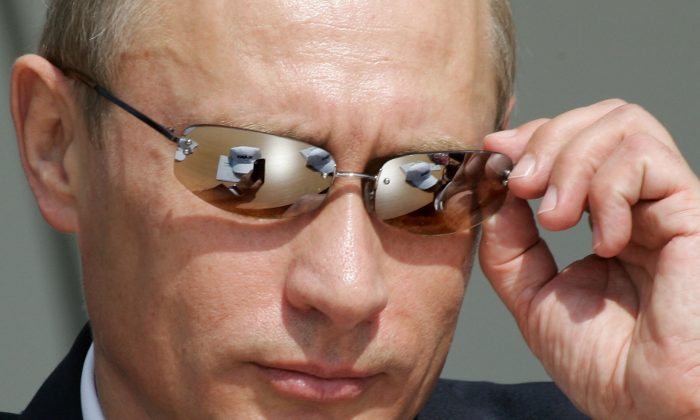 Putin Undermined Democracy From the Get-Go

WASHINGTON—Russia’s President Vladimir Putin has been the source of much speculation in the West as to his true nature and motivation. He was elected president twice in 2000–2008, and again to a six-year term in 2012. So he is not a czar, though widespread fraud was well documented in the third election.

Freedom House, which tracks freedom and democracy of the world’s countries, changed its rating of Russia from “partly free” in 2004 to “not free” in 2005.

By reading Freedom House’s summary over the last 13 years, one can see how human rights and democracy under Putin’s rule has eroded.

In a new book, “Putin’s Kleptocracy – Who Owns Russia?” Karen Dawisha states that scholars are wrong to “approach the Putin era as a democracy in the process of failing.”

That assumes that the autocracy that Russia has become is the result of historical accidents or and bureaucratic incompetence. Not so, she said. It is not by chance that we have the current system.

She argues that Putin and his clique sought from the beginning to establish an authoritarian regime in Russia. They were not motivated to build a democracy “that would inevitably force them to surrender power at some point,” she states.

Dawisha is saying in so many words that getting a good grade from Freedom House was the furthest thing on Putin’s mind when he came to power.

“Within weeks of Putin’s coming to power, the Kremlin began to take away the basic individual freedoms guaranteed under the 1993 Russian Constitution.” She points to a document “never before published outside Russia,” which shows that plans were laid out in late 1999 and early 2000 to reshape the government to deny “citizens the rights of a free press, assembly, and speech.”

The group that brought Putin to power in the 1990s in St. Petersburg has the same people who are around him now and are benefitting immensely at the country’s expense. Putin created a system based on massive predation, what she calls a “kleptocracy,” so that his close associates can “loot the country without limit.” To get away with their crimes, they engage in criminal behavior, and control the legal system and the media.

The people that are politically close to Putin are multimillionaires and the oligarchs are billionaires. The understanding is that members of the inner circle can keep their ill-gotten wealth as long as they don’t challenge Putin politically. Russia is rated below Nigeria in its ability to control corruption.

Dawisha was a guest speaker at the Wilson Center on Oct. 1, where she said that her book is the “most conservative analysis” of how Putin rose to power, using only sources that are publicly available. The facts of Putin’s rise are out there if one is willing to do the work and bring them to light, she said. Dawisha said she owes a lot to the Russian journalists of the 1990s when free journalism was possible. They followed Putin’s trail from the beginning.

The story begins in the late 1980s when it was evident that the Communist Party of the Soviet Union (CPSU) was going to collapse like the party had in the Eastern European countries.

Dawisha said on al-Jazeera America, “The communist party was concerned that if Russia were to become a multiparty system, they would lose access to state coffers. So they started to move that money and historically the group that always moved that money was the KGB. So they authorized the KGB to start moving that money out of the country. When they did that, they basically took all the money for Gorbachev and they took all the money for Yeltsin. They completely bankrupted the country.”

After the failed coup against Yeltsin, the CPSU was banned. Only its members knew where the money was buried in offshore accounts, to the consternation of the country’s leaders who wanted to know what had happen to the money.

The wealth stolen from the people of Russia is massive. The median wealth in Russia is $871, deplorably low for a country that exports energy, said Dawisha. It’s even lower than the median wealth in India. “Russia has the highest level of wealth inequality in the world, apart from small Caribbean nations with resident billionaires,” stated the Credit Suisse report last year.

When Russia annexed Crimea and militarily supported the pro-Russian separatists, the U.S. government responded with sanctions, but not sanctions on Russia as a whole or in the usual sense. In an unprecedented response, visa bans and asset seizures were targeted at the elite group of individuals close to Vladimir Putin.

Dawisha said that normally we would expect some “military-to-military response and more early NATO action.” The sanctions on individual holdings indicated that U.S. Intelligence was well aware of what was transpiring with Putin and his friends.

“The reason I think is because these sanctions represented a public admission by the United States government of what it had already known for over a decade that Putin had built a system based on massive predation not seen in Russia since the czars,” she said.

Dawisha said the failure of the West to confront this political system was a “policy failure, not an Intelligence failure.” She said that everything in her book and much more was known by the Intelligence services of the U.S., Britain, and Germany.

“Here was a failure of policy from looking into the eyes and seeing his soul under one president to ‘reset’ under another.” It would be foolish, she said, to offer Putin’s Russia another reset.

At the Wilson Center, Dawisha described a remarkable document from the Public Presidential Administration that was leaked and portions appeared in “Kommersant,” in May 3–5, 2000, but has since disappeared from the Kommersant archives. The Kremlin has acknowledged its existence.

It provides guidelines for undermining democratic governance and cooperation. Written in 1999 just before Putin was to become president, it states, according to Dawisha, “Each department in the presidential administration will have open and public tasks as well as secret and actual tasks, so it can tangibly and concretely influence all political processes that are occurring in society.”

“If the president really wants to ensure social order and stability in the country during his rule, then the self-governing political system is not needed.” In other words, democracy is not needed, said Dawisha.

She highlighted a few directives:

“Opposition media outlets will be driven to financial crisis.”

‘Too Many to Kill’

Dawisha told the story by Sergei Tretyakov, who was an officer in the SVR, which is Russia’s foreign intelligence service that succeeded the KGB for external intelligence. He later defected to the United States. He recounted a conversation in Brighton Beach, N.Y., between Zolotov and Gen. Evgeny Murov, both heads of agencies in the Federal Protection Service (FSO) in which they discussed assassinating Boris Yeltsin’s chief of staff Alexander Voloshin as well as a list of other politicians in Moscow who were deemed obstacles to Putin’s free hand.

According to Tretyakov, Zolotov said, “There are too many. It’s too many to kill—even for us.”