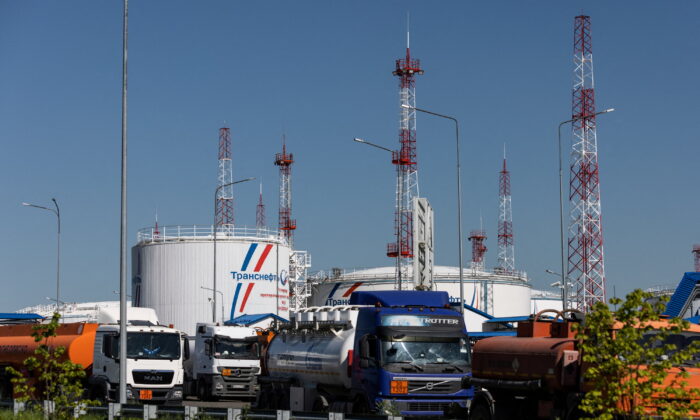 Petrol trucks are parked near oil tanks at Volodarskaya LPDS production facility owned by Transneft oil pipeline operator in the village of Konstantinovo in the Moscow region, Russia, on June 8, 2022. (Maxim Shemetov/Reuters)
Commodities

Russian President Vladimir Putin said on Thursday that Russian companies will not block off their oil wells despite the West’s efforts to lessen its dependence on energy supplies from Moscow.

The United States introduced its embargo on Russian imports in March just days after Moscow sent its troops into Ukraine, while the European Union agreed last month in principle to gradually cut 90 percent of its oil imports from Russia by the end of this year.

Putin said the West will not be able to completely stop using Russian energy resources over next few years.

“As far as refusal from our energy resources is concerned, this is unlikely for the next few years, while it’s not clear, what will happen during those few years. That’s why, no one will pour cement into the wells,” Putin told a televised meeting with young entrepreneurs.

Russian oil production fell by around 9 percent in April, but has been on a steady rise since then despite the West’s sweeping sanctions against Russia, as Moscow diverted its oil exports to Asia, notably to India and China.

Russia may be getting more revenue from its fossil fuels now than before the start of what it calls its “special military operation” in Ukraine, as global price increases offset the impact of Western efforts to restrict its sales, U.S. energy security envoy Amos Hochstein said earlier on Thursday.

Putin said the sanctions had led to a decrease of oil supply to global markets, while prices were rising.

“The earnings of (Russian) companies are rising in money terms. Everybody sees it, everybody understands it,” he said.