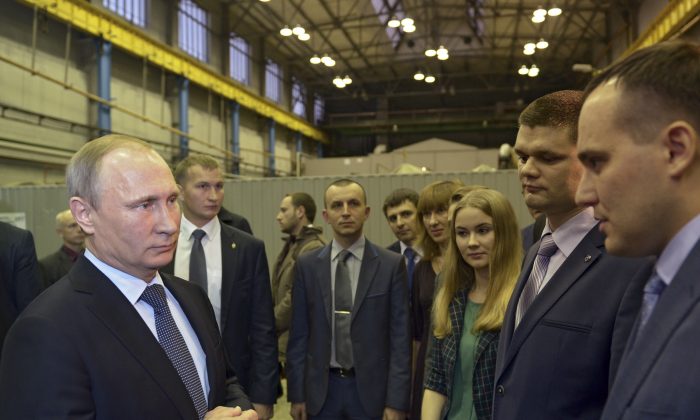 Russian President Vladimir Putin meets with employees of the Ural Transport Machine Building Design Bureau during a visit to the UralVagonZavod factory in Nizhny Tagil in the Ural mountains, Russia, on Nov. 25, 2015. (Alexei Nikolsky/Sputnik via AP)
Middle East

Russian President Vladimir Putin said it has received new intelligence that oil from areas controlled by ISIS is being moved through Turkey on a widespread scale.

Putin said that the Su-24 that was downed by Turkish jets on Nov. 24 in an attempt to secure ISIS oil deliveries into the country. The Russian president delivered his comments at the Paris climate change summit on Nov. 30.

“At the moment we have received additional information confirming that that oil from the deposits controlled by Islamic State militants enters Turkish territory on industrial scale,” he said, according to state-funded RT.

“We have every reason to believe that the decision to down our plane was guided by a desire to ensure security of this oil’s delivery routes to ports where they are shipped in tankers,” Putin added.

“We are not that dishonest as to buy oil from terrorists. If it is proven that we have, in fact, done so, I will leave office. If there is any evidence, let them present it, we’ll consider [it],” he said, according to Russian TASS news agency.

U.S. ambassador to NATO, Douglas Lute, said American data “corroborates Turkey’s version of events” when the plane was shot down. “The airplane was in Turkey, it was engaged in Turkey, it had been warned repeatedly,” Lute said. “There was no flight plan issued for a violation of NATO airspace.”

Russia-Turkey relations has declined tremendously since Turkey shot down a Russian plane over claims that it violated Turkish airspace despite several warnings. Russia said the plane was shot down inside of Syrian airspace, where Moscow has been carrying out airstrikes on militants inside the country.

“As for the downed Russian jet, of course I raised that theme at all the bilateral meetings which I had. I gave relevant explanations about what had happened,” Putin was quoted by TASS as saying.

Even though the two leaders were at the Paris talks, they didn’t meet with one another. Putin refused to speak with Erdogan, but he spoke with President Barack Obama

“No meeting with Erdogan is planned. There is no discussion of such a meeting,” the Kremlin spokesman told journalists, as quoted by the Telegraph.