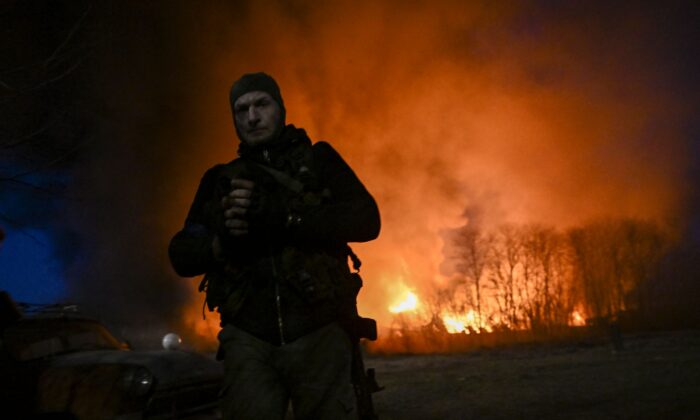 A Ukrainian serviceman looks on as he stands in front of a burning warehouse after a shelling in Kyiv on March 17, 2022. (Aris Messinis/AFP via Getty Images)
Russia-Ukraine War

Russian President Vladimir Putin has declared that his country does not want to occupy Ukraine as Moscow’s invasion entered the fourth week with no end to conflict in sight.

“The appearance of Russian troops near Kyiv and other cities of Ukraine is not connected with the intention to occupy this country. We do not have such a goal, and I also directly stated this in my address on February 24,” Putin said in a televised government meeting on March 16. Instead, Russia was forced with “no other option for self-defense,” he said.

Characterizing the government of Kyiv as “pro-Nazi,” Putin pointed to the “real genocide” of people in Ukraine’s Donbas region who were, for almost eight years, subjected to the “most barbaric methods.” The Ukrainian government-imposed blockades and large-scale punitive actions as well as carried out constant artillery shelling and “terrorist attacks” on Donbas, according to Putin.

“And for what? Only because they sought elementary human rights—to live according to the laws and traditions of their ancestors, to speak their native language, to raise their children the way they want.”

In the future, the “pro-Nazi” regime could get its hands on weapons of mass destruction, whose target would be Russia. The president also accused Ukraine of having a “network of dozens of laboratories” funded by the U.S. Pentagon that was conducting “military biological programs.”

Despite repeated warnings that these actions posed a direct threat to Russia’s security, Ukraine, the United States, and NATO dismissed such concerns with “ostentatious and cynical disdain,” Putin said.

Therefore, Moscow was left with “no options to peacefully solve problems” and was forced to launch a “special military operation.”

The Russian president also criticized Western sanctions imposed on the country, saying that sanctions and restrictions against Russia would have been imposed “in any eventuality.” Moscow’s military action against Ukraine only provided the West with a “pretext for new sanctions.”

Putin also claimed Russian citizens in many Western nations face discrimination and are refused medical care, jobs, the right to celebrate their culture, etc. just because they are from Russia.

“Trying to ‘cancel’ Russia, the West tore off all the masks of decency, began to act boorishly, demonstrated its true nature,” he added. “It just begs a direct analogy with the anti-Semitic pogroms that the Nazis staged in Germany in the 30s of the last century, and then their henchmen from many European countries who joined Hitler’s aggression against our country during the Great Patriotic War.”

Putin’s characterization of Kyiv as a “pro-Nazi” regime has been denounced by multiple scholars in a statement published in the Jewish Journal on Feb. 27. Russian propaganda constantly presents the elected leaders of Kyiv as Nazis that oppress the local Russian population, it said.

“We strongly reject the Russian government’s cynical abuse of the term genocide, the memory of World War II and the Holocaust, and the equation of the Ukrainian state with the Nazi regime to justify its unprovoked aggression.”

“This rhetoric is factually wrong, morally repugnant, and deeply offensive to the memory of millions of victims of Nazism and those who courageously fought against it, including Russian and Ukrainian soldiers of the Red Army.”

Though the scholars admitted that Ukraine, like any other country, has its share of violent xenophobic and right-wing extremists, they made it clear that it does not justify Russian aggression and the “gross mischaracterization” of the country.

With the Russia–Ukraine war entering its fourth week, Moscow is continuing to shell Ukrainian cities. Since the invasion, there have been 780 confirmed civilian deaths and 3.2 million refugees, according to the United Nations High Commissioner for Refugees.

Both countries are negotiating for a resolution but are yet to come to an agreement. Polish Prime Minister Mateusz Morawiecki has said that he will request a U.N. peacekeeping mission to Ukraine at the next NATO summit.