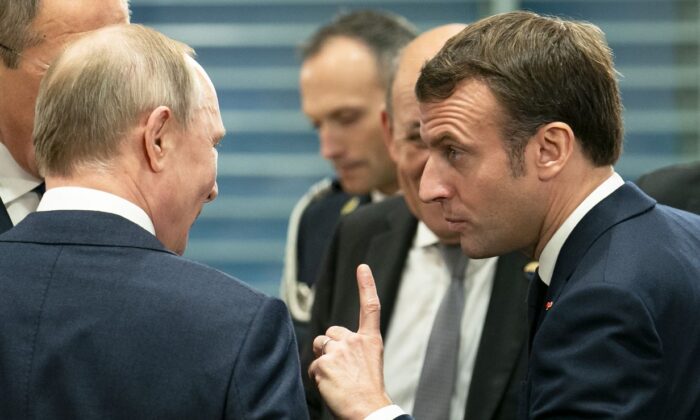 French President Emmanuel Macron and Russian President Vladimir Putin on Sunday agreed to work on a ceasefire in eastern Ukraine, said Macron’s office and the Kremlin said in separate statements.

“In view of the urgency of the situation, the Presidents acknowledged the need to intensify the search for solutions through diplomatic means via the foreign ministries and political advisers to the leaders of the Normandy format,” the Kremlin said in a statement, adding that it “should facilitate the restoration of the ceasefire regime and ensure progress in the settlement of the conflict in Donbas.”

The French foreign minister, Jean-Yves Le Drian, will meet Russian Foreign Minister Sergei Lavrov in the coming days, according to the French statement.

Putin, who reportedly spoke with Macron for more than 100 minutes, also said that there are “modern weapons and ammunition being sent to Ukraine by NATO member countries” and said he believes such actions encourage Kyiv to “pursue a military solution to the Donbas problem.”

The Putin-Macron phone call came as the Belarus defense minister said Russia and Belarus would extend military drills that were supposed to end Sunday. Meanwhile, it comes amid reports of heavy shelling and military activity in the Donbas, as the leaders of two breakaway republics announced the evacuation of civilians into Russia.

Both Ukraine and Russia have accused one another of escalating the conflict in the region in recent days. Meanwhile, U.S. and European nations have alleged that Russia currently has about 150,000 troops stationed near its border with Ukraine and is preparing to mount an attack.

In another warning, U.S. Secretary of State Antony Blinken told CNN Sunday that “everything we’re seeing suggests that this is dead serious, that we are on the brink of an invasion,” referring to Moscow.

“But until the tanks are actually rolling and the planes are flying, we will use every opportunity and every minute we have to see if diplomacy can still dissuade President Putin from carrying this forward,” Blinken added.

Ukrainian President Volodymyr Zelensky called Saturday on Putin to choose a place where the two leaders could meet to try to resolve the crisis and on Sunday appealed for a cease-fire on Twitter. Russia has denied plans to invade, but the Kremlin had not responded to Zelensky’s offer to meet by Sunday, and it was Belarus—not Russia—that announced the extension of the drills.

On Sunday, Dmitry Polyanskiy, the Russian deputy ambassador to the United Nations, told Sky News that U.S. and UK intelligence should be treated as inaccurate due to previous errors—namely, the claim that Iraq had weapons of mass destruction, which led to the 2003 U.S. invasion.