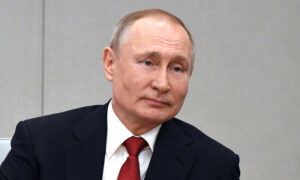 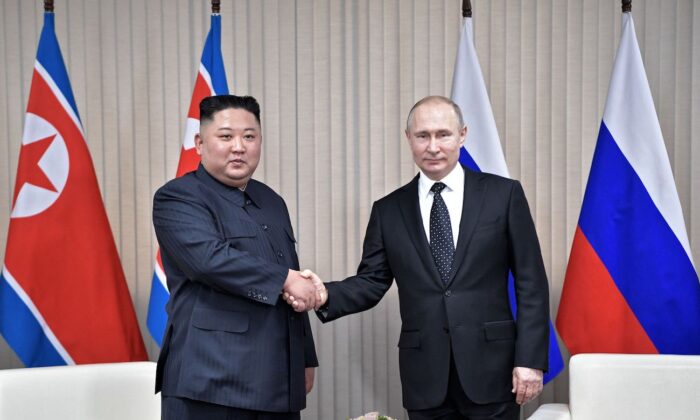 Russian President Vladimir Putin has awarded North Korean dictator Kim Jong Un a commemorative war medal as a token of gratitude for his role in preserving the memory of Soviet soldiers who died on North Korean territory.

Kim was given the medal, titled “75 years of Victory in the Great Patriotic War of 1941-1945,” marking the 75th anniversary of the Red Army’s victory over Nazi Germany, a statement from the Russian Embassy in Pyongyang said May 5.

The award was presented by Russia’s ambassador to North Korea, Alexander Matsegora, to the Minister of Foreign Affairs of North Korea, Ri Son-gwon, and photos of the occasion show both Russian and North Korean officials wearing masks, despite the fact that North Korea so far has not reported a single case of the CCP virus, also referred to as novel coronavirus.

Kim, who was given the award “for his great personal contribution to the commemoration of dead and buried Soviet citizens on the territory of the DPRK and showing concern about the safety of the Soviet soldiers’ graves and memorial sites,” was notably not in attendance at the ceremony.

Russia’s state-run TASS news agency reported that there are 11 mass graves and 345 individual graves in North Korea which contain the remains of 1,375 Soviet troops. More than 4,700 Soviet troops died in battles to liberate Korea from the Japanese in 1945, the outlet said. One of the key landmarks in Pyongyang is the Liberation Monument, which commemorates Soviet soldiers who died in the battles to liberate Korea from the Japanese occupation in 1945.

The award comes shortly after much international speculation about Kim’s reportedly failing health and swirling rumors that the North Korean dictator may be dead after a conspicuous public absence since April 11.

However, images released on May 1 by North Korean state media purportedly show Kim and his sister Kim Yo Jong, and various officials, at a ceremony at a fertilizer plant in Sunchon, near the capital, Pyongyang, on Friday. The images and associated reports however, have not been independently verified by Western media.

A senior South Korean presidential official also told reporters Sunday that Jong Un had not undergone surgery or any other medical procedures, after reports suggested he had, although they did not provide the basis for the intelligence assessment.

Last year Russia invited Kim to visit Moscow on May 9 and attend the military parade marking the 75th anniversary of the victory, however Putin announced the decision to postpone the parade indefinitely last month because of the CCP virus pandemic.

As of May 6, Russia has 155,370 confirmed cases of CCP virus, while 1,451 deaths have been attributed to the virus, which originated in Wuhan, China, in December last year and causes the disease COVID-19.