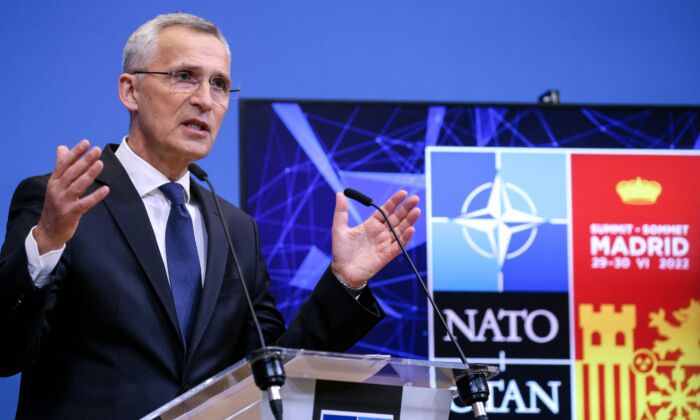 NATO Secretary General Jens Stoltenberg gestures as he speaks during a press conference to preview the NATO Summit in Madrid at the NATO headquarters in Brussels, Belgium, on June 27, 2022. (Kenzo Tribouillard/AFP via Getty Images)
Viewpoints

Put the Pacific Into NATO: NAPTO

Beijing’s and Moscow’s lawlessness and collaborative belligerence threaten all sovereign nations in Europe and Asia.

We still have time to respond with a war-deterring diplomatic stroke: extending NATO’s Article 5 to committed nations in the Pacific and East Asia who already field NATO-ready military forces.

Background: The NATO treaty’s Article 5 exemplified the hard, clear-eyed diplomacy that won the Cold War. Cheekily known as the Three Musketeers Clause, Article 5 told the Soviet Union “that an armed attack against one or more of them (NATO members) … shall be considered an attack against them all.”

Each member would then take “action as it deems necessary, including the use of armed force, to restore and maintain” NATO security. The enemy had to attack a member’s territory or member “forces, vessels or aircraft” operating “in or over” NATO territory.

In 2016 a U.N. court backed Manila’s accusations of robbery and invasion. Beijing still ignores the verdict.

Chinese-Russian collaboration is multifaceted but these germane diplomatic and military cases make the big points. China supports Russia’s invasion of Ukraine. Russian and Chinese diplomats collaborate as they seek to create and exploit political rifts among targeted nations worldwide. In the Pacific, the Russian and Chinese navies, air and missile forces stage mock attacks against Japanese and American air bases and naval targets, from Hawaii to Tokyo Bay.

Does China encourage North Korea to threaten missile strikes on Guam and Hawaii?

That’s a question with nuclear and NATO-less implications.

The United States is a founding NATO member. However, Guam and Hawaii are not covered by the NATO treaty and Article 5. The original 1949 treaty covered Europe and North America north of the Tropic of Cancer. Puerto Rico, Guam, and Hawaii were outside the geographic zone.

When Turkey joined NATO in 1951 the treaty was amended and Article 5’s reach extended. About 97 percent of Turkey is in Asia—Anatolian Turkey.

Lawlessness and invasion, however, alter the calculus. In early June Japan’s Nikkei.com featured a story with this quote from Sen. Ben Sasse (R-Neb.): “Let’s build a NATO for the Pacific. We need allies to get back on the offensive against the CCP (Chinese Communist Party) … as Chairman Xi (Jinping) looks to expand his sphere of influence, we need a new military alliance centered far out into the Pacific.”

Let’s speed up the shift and put the Pacific’s P in NATO. North Atlantic and Trans-Pacific Treaty Organization. If NAPTO seems awkward, APTO is apt.