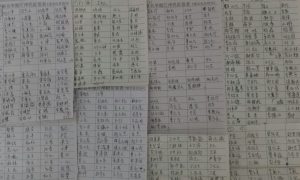 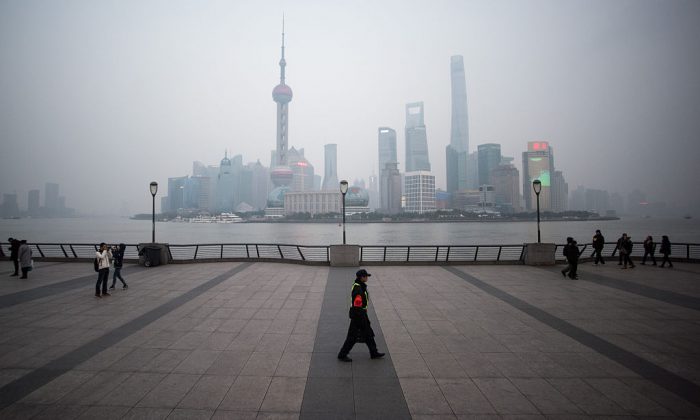 A security guard walks at the bund near the Huangpu river across the Pudong New Financial district, in Shanghai on January 18, 2016. (Johannes Eisle/AFP/Getty Images)
China

Longtime stronghold of Jiang Zemin and allies to be renewed focus of Party inspections, sources say
By Larry Ong

For the past three years, the southern metropolis of Shanghai has been the site of a struggle for control between the Party leader Xi Jinping and his anti-corruption investigators on the one side, and the entrenched political network of his chief antagonist, the former Party leader Jiang Zemin, on the other.

Now, there are signs that this year will be the decisive battle for the city, and indications that the investigations that take place there will be used as leverage to effect a thorough purge of the Shanghai faction, which has for decades derived its power from the patronage of Jiang.

Anti-corruption inspectors in mid-May concluded a massive sweep of over two dozen Shanghai government agencies, some of which are linked with Jiang’s kin and allies. Recently, a prominent human rights lawyer also indicated that Jiang and his sons have been placed under internal political control, restricting their activities.

Well-placed sources in China have told this newspaper that the “Shanghai gang,” a byword for Jiang’s faction, would be ousted. And the Chinese regime’s anti-corruption chief, Wang Qishan, made menacing statements earlier in the year about leveraging on the investigation of lower-level officials to smoke out the captains of malfeasance.

On March 26, the Shanghai branch of the Central Committee for Discipline Inspection (CCDI) announced a two month-long investigation of 28 local agencies. At least four of these agencies—public security, transportation, film and culture, and the press and publications—are connected with members of the Jiang family or their hangers-on.

Anti-corruption inspectors have earlier opened investigations into the private-sector companies connected with the Jiang brothers. Over a year ago, cronies of Jiang’s eldest son, Jiang Mianheng, were targeted in an investigation of major telecommunications firms that he controlled. Inspectors also probed a prominent Shanghai investment company controlled by Jiang Mianheng, Jiang Zemin’s elder son, in November 2015.

Last December, anti-corruption officials had investigated and purged the head of a major state-owned construction group in Shanghai that Jiang Miankang is closely linked with.

Until recently, Shanghai’s public security bureau was firmly in the hands of the Jiang family. Before leaving in 2013 to chair Shanghai’s political consultative body, Wu Zhiming, the nephew of Jiang Zemin, had spent a little over a dozen years at or near the top of Shanghai’s security apparatus—eight months as head of the public security bureau, and 10-and-a-half years as head of the Political and Legal Affairs Commission, a small but powerful Party organ that coordinates the prisons, courts, and the police.

Film, media, and cultural departments come under the purview of the regime’s propaganda apparatus, which is headed by Liu Yunshan, a Jiang loyalist and a member of the Politburo Standing Committee—the most powerful decision-making body in the regime. In recent months, according to analysts, Liu has been steadily undermining Xi Jinping through the propaganda machinery, even as Xi strives to control the Party’s pen.

Though Liu is not directly in charge of Shanghai’s propaganda units, and Wu has long left the public security department, any evidence of official malfeasance gathered could very possibly lead to their eventual arrest and prosecution, according to recent remarks by Wang Qishan the anti-corruption chief.

At a key CCDI meeting in January, Wang instructed his inspection officials to smoke out and implicate all parties who directly partake in or are associated with corrupt activities. The idea is to trace up the line all parties implicated with corrupt conduct, a change from usual Party practice where investigations are often limited and localized to scapegoat cronies, thus protecting powerful political patrons.

More crucially, Wang is determined to break up the “Shanghai gang” this year, according to a source from the top levels of administration in Beijing. Speaking to the Epoch Times on condition of anonymity, the source added that Wang had said during a discipline inspection committee meeting that “in 2016, Shanghai is key.”

The massive raid of Shanghai appears to be part of this bold offensive against the powerful Shanghai gang and its godfather, Jiang Zemin.

Jiang and Sons ‘Under Control’

Jiang hasn’t personally intervened to prevent all this taking place in his own backyard because his own power seems to be waning.

The Chinese Communist Party has inherited a Chinese political tradition of conveying key political messaging in code and cryptic signaling. So China watchers must scrutinize the celebration or non-celebration of anniversaries and “check the lists of guests at official functions and note the order in which their names appear,” argued the well-respected, late Belgian sinologist Pierre Ryckmans.

This year, Jiang has failed to appear on the guest list of notable Party cadres’ funerals, a stark contrast to the consistent attendance of Xi Jinping and those whom Jiang formerly sidelined.

For instance, former Party leader Hu Jintao and former Chinese premier Zhu Rongji, Wen Jiabao, and Li Peng have joined Xi and members of the Politburo Standing Committee in paying their respects at some of the four wakes in March and April. Hu was even named immediately after Xi on the list of guests attending the funeral of Chinese Academy of Engineering academician Song Wenchong.

Until recent times, missing public events would be unthinkable for Jiang, known for maintaining a certain public image. Jiang’s non-attendance at recent funerals is possibly a less than subtle indication by Xi that the Party godfather no longer has any standing in the pantheon of Party elders and that he has limited freedom to come and go as he pleases.

Indeed, Jiang’s sons now have their movements restricted, according to Zheng Enchong, a prominent Shanghai-based human rights lawyer who was placed under house arrest after having long tussled with members of the Shanghai gang. Zheng told the Epoch Times that he received his information about Jiang from “extremely reliable” channels.

“If Jiang Zemin’s sons are not being restricted, then I’m the biggest rumormonger,” Zheng said. “But I’m living pretty comfortably now, and the restrictions placed on me are not as severe as in the past. … The Jiang family has let this information slip because they are no longer self-assured, and Xi Jinping is about to bring in the calvary.”

After the Power Behind the Throne

Apprehending the Shanghai gang, however, doesn’t appear to be Xi’s end game. He seems to be signaling beyond that.

In August 2015, Party mouthpiece People’s Daily carried an editorial warning retired Party officials to step away from manipulating political affairs. Less than a fortnight later, a stone slab bearing the calligraphy of Jiang that was prominently placed in the front lawn of the Central Party School in Beijing was removed.

The static in Xi’s signaling has been progressively clearing since January. In a book of collected speeches, Xi indicated that some Party leaders had formed cliques and played at “Taishang Huang,” or a power behind the throne. Jiang is known to have manipulated the Politburo Standing Committee, including by tinkering with retirement ages and membership, to extend his power base and ensure he was in effective control long after he left office.

In May, Xi warned in a speech to the anti-corruption agency of “ambitious figures and conspirators” that formed “cabals and cliques” to “unscrupulously carry out personal political ambitions.”

There is a need to “eradicate the hidden dangers to prevent a misfortune,” Xi said.