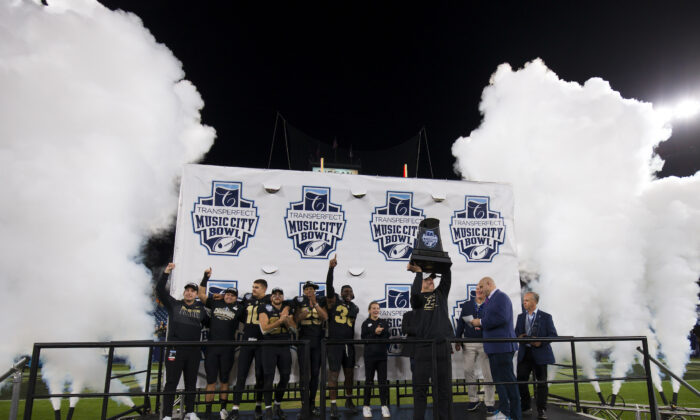 The Purdue Boilermakers (9–4) outlasted the Tennessee Volunteers (7–6) in overtime, as both teams had record-setting offensive performances at the Music City Bowl in Nashville on Thursday; along with a record crowd of 69,489 fans in attendance.

The game ended on Mitchell Fineran’s 38-yard field goal in overtime for a Purdue “walk-off” victory.

The Vols had just failed on downs on their overtime drive. A controversial call was made by the officials as the Vols coach Josh Heupel called for their second fourth-down attempt in overtime. On a 4th and goal from the one-yard line, running back Jaylen Wright’s forward progress was called short of a touchdown; as it looked as if he was stopped by defenders Kieren Douglas and Jamar Brown. Replay shows that Wright, seemed still on top of Douglas and thus not down, as he stretched the ball out over the goal-line for a potential touchdown. It was inconclusive, but forward progress cannot be overturned. Tennessee had just converted on a 4th & 2 on the previous set of downs as quarterback Hendon Hooker scrambled to the sidelines, finding no receivers open, barely reaching the first-down marker.

“I thought we scored, but you know it’s a tough call,” Hooker said. “Feels like me and my teammates gave it our all.”

Heupel would have been the first Tennessee coach to win a Bowl game in his first year if Chase McGrath’s 56-yard field goal attempt was successful on the final play of regulation.

“End of the day you can’t control when the yellow hankies come out,” Heupel said. “There’s some things I don’t agree with. Yeah, everyone knows that. But it’s about what we can control. “I love these guys. “They fight, they scratch, they claw, and they compete. We came up a play short.”

Both teams combined for 1,293 yards of total offense, which is second in all-time Bowl history, behind the 2011 Alamo Bowl’s 1,397 yards by Washington and Baylor.

Vol’s QB Hooker threw five TD passes, completing 26 of 41 attempts for 378 yards, and no interceptions. Cedric Tillman caught three touchdowns from seven passes for 150 yards. While Velus Jones Jr. added 10 catches for 85 yards and a TD, and Jabari Small ran for 180 yards and a touchdown.

The Vols fast-paced offense was slowed enough by Purdue to get to overtime. Purdue was missing six players, including their two All-Americans who “opted-out” to prepare for the NFL: defensive end George Karlaftis and wide receiver David Bell. The biggest difference-maker was that the Vols were penalized 14 times for 128 yards.

“It’s why you love the game; it’s why it keeps bringing you back,” O’Connell said. “The fact it’s unknown. No one knows what’s going to happen. It’s not a movie or TV show where the actors get retries. It seems like the world’s watching and anything could happen.”

The teams combined for four touchdowns in the final five minutes of the game. “A crazy game,” said Purdue coach Jeff Brohm. “It really picked up there at the end.”

Purdue tied for the second-most wins in the school’s 134-year football history, along with 11 other teams, to win nine games for the season.

“We found a way to just barely win,” added Brohm.