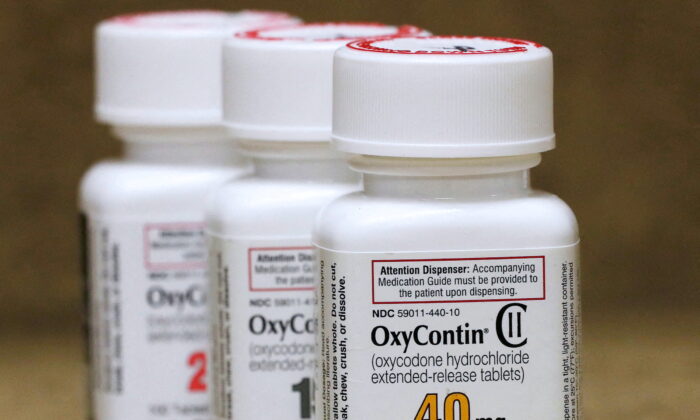 Bottles of prescription painkiller OxyContin pills, made by Purdue Pharma LP sit on a counter at a local pharmacy in Provo, Utah, on April 25, 2017. (George Frey/Reuters)
Companies

The judge overseeing Purdue Pharma’s bankruptcy on Wednesday approved a $6 billion opioid settlement funded by its Sackler family owners, overruling objections from the Department of Justice and 20 states that opposed the deal.

Under the settlement, the Sacklers would pay between $5.5 billion and $6 billion to a trust that will be used to pay the claims of states, victims of addiction, hospitals, and others who have argued that the Purdue painkiller OxyContin played a central role in the U.S. opioid epidemic.

The revised settlement must still be written into a new reorganization plan before getting final approval in bankruptcy court.

Members of the Sackler family have denied wrongdoing. They said last week in a statement that they “sincerely regret” that OxyContin “unexpectedly became part of an opioid crisis.”

There have been nearly 500,000 U.S. opioid overdose deaths over two decades, according to the U.S. Centers for Disease Control and Prevention.

U.S. Bankruptcy Judge Robert Drain in White Plains, New York, called the settlement an “extraordinary” improvement on previous offers from the Sacklers, and he blasted the U.S Department of Justice as “reprehensible” for its continued opposition.

The Justice Department’s Office of the U.S. Trustee, which oversees bankruptcy administration, said that the bankruptcy court does not have authority to approve the settlement because an appeals court must first decide whether the Sacklers can receive sweeping legal immunity in exchange for the payment.

“Why are we even here?” Justice Department attorney Nan Eitel asked at the hearing, arguing that the deal was premature.

Drain repeatedly raised his voice at Eitel, saying that the Justice Department appeared uninterested in improving the deal and was only interested in “throwing out ways to kill it.”

“I find this reprehensible,” Drain said.

An attorney for Purdue’s official creditors’ committee said the Justice Department appeared willing to risk a multibillion-dollar settlement so that it could strengthen its argument that bankruptcy courts should not use their authority to protect non-bankrupt entities like the Sacklers.

A Justice Department spokesperson said after the hearing that the agency stands behind its attorney and her argument, and will continue its appeal.

The Sacklers’ payment is contingent on ending their exposure to opioid lawsuits. But a U.S. District judge ruled in December that the protections they seek fall outside the bankruptcy court’s authority. Purdue is appealing that decision in the U.S. 2nd Circuit Court of Appeals.

The new agreement replaces an earlier $4.3 billion settlement, which was upended after nine attorneys general and others argued that the Sacklers should not receive such sweeping legal protections.

After agreeing to the prior deal, 20 states objected to the new settlement because it includes a $277 million payment exclusively to states that negotiated the $6 billion deal. Some have said it would unfairly reduce the percentage of funds dedicated to addressing the opioid crisis in their own states.

The states still have time to negotiate, Drain said, and may be forced to accept terms they do not like rather than inviting the “dog eat dog” litigation that would result if the settlement fails.

Purdue said last week that the settlement would provide additional funding for opioid abatement programs, overdose rescue medicines, and for victims, while putting the company on track to resolve its bankruptcy case on “an expedited schedule.”

On Thursday, victims of the opioid epidemic will address members of the Sackler family in a hearing overseen by Drain. The hearing will be conducted by Zoom due to COVID-19 restrictions and the Sacklers will not be able to respond.

Purdue filed for bankruptcy in 2019 in the face of thousands of lawsuits accusing it and members of the Sackler family of igniting the opioid epidemic through deceptive marketing of OxyContin, a highly addictive pain drug.

Purdue pleaded guilty to misbranding and fraud charges related to its OxyContin marketing in 2007 and 2020.

By Dietrich Knauth and Tom Hals