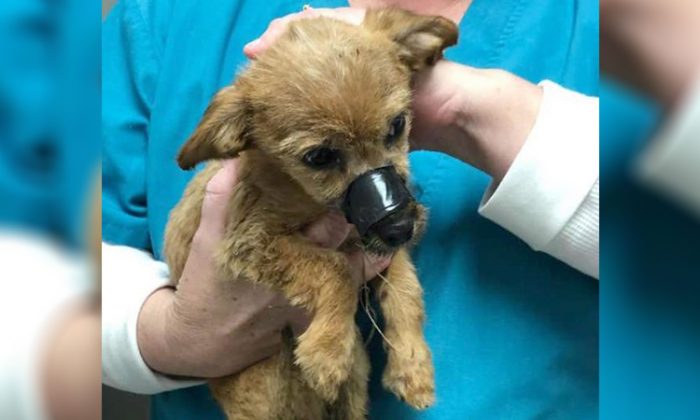 Bob Hoelter, of Griffith, Indiana, only intended to walk to the store. But the universe had other ideas.

“I usually drive,” Hoelter said in conversation with The Dodo in the summer of 2019. “That night I decided I needed some exercise.” Striding over a bridge, making easy work of the 2-mile journey, Hoelter heard a noise. Pausing, he listened intently and clarified his initial suspicions: the noise was a whimper, and something needed his help.

“I was looking at the water and the land, but I don’t see anything, but I hear it,” Hoelter said. “I walked back to land and I walked around and looked around.”

Isolating the sound to the dark underbelly of the bridge, Hoelter dropped to his hands and knees and crawled towards whatever mystery awaited him. “I get my flashlight out because I always carry a flashlight with me,” Hoelter said. Reaching the bottom of the verge and the underside of the bridge, Hoelter finally saw where the sad cries were coming from: a tiny, petrified puppy.

Hoelter’s rescue instinct took over as he reached for the pup, only to discover that the creature wasn’t only lost; its muzzle had been sealed shut with black electrical tape.

Holter was a local and knew that there was a veterinary clinic nearby: Griffith Animal Hospital. “I just threw him in my jacket, crawled back up and started hoofing it to the animal hospital,” Hoelter continued. The store would have to wait; there was now a far more pressing mission to complete.

Griffith Animal Hospital manager Lori Kovacich was on duty at the time and couldn’t believe her eyes. “I was out of my chair and in the lobby to get him in seconds,” Kovacich remembered. She raced the shivering puppy into the exam room without thinking to ask Hoelter for his personal details. The puppy had quite obviously been abandoned, and his well-being was the primary consideration. “I think I kind of had tunnel vision,” Kovacich admitted.

Hoelter, having done his good deed, continued on his way.

Kovacich and her staff quickly assessed the pup and realized that he was starving, his skin was damaged beneath the highly adhesive tape, he had a broken leg, and he likely hadn’t eaten in days. They estimated his age at just 4 months. After a thorough assessment, which involved the careful removal of the tape and antibiotic injections, the traumatized puppy was bundled up in blankets for a quiet recovery.

Staff believe that the pup was intentionally thrown from the bridge but missed the water and ended up stranded on the banks of the river.

“In my 30 years of working here, I never thought I’d see this … in real life,” Kovacich wrote in an emotional Facebook post.

“Through tears we watched this tiny pup eat, and eat and wag his little tail. Our whole staff was without words,” she further added.

Local animal lover Mary Witting and her husband, Doug, saw the post on the Griffith Animal Hospital’s page, and it captured their hearts. They had recently lost their own dog. “I thought, ‘That cute little face, he needs me,’” Mary responded. “I can give him 24/7 love, and I need him.”

In a long-awaited happy ending for the dear pup, the Wittings swiftly decided to adopt him. They named him Louie.

But the tale doesn’t end there: Hoelter’s niece saw the Griffith Animal Hospital’s Facebook post and arranged a reunion between the pup and the heroic man who answered his woeful cries. And much to Hoelter’s surprise and delight, the puppy remembered him.

“They sat him down and he ran right to me,” Hoelter said. “I was awestruck.” All’s well that ends well: Hoelter is a puppy’s hero, and little Louie is safe and sound.

Louie even greeted Hoelter with a lot of love and kisses. It makes Hoelter absolutely happy to know that Louie has a wonderful new home.

Of course, Hoelter was also thankful to the hospital staff for being there to help the puppy that night.

“We all have our calling,” Hoelter concluded, modestly. “I’m going to have to walk more often.”

We wish Louie and the Wittings a wonderful life journey together. Share this heartbreaking yet redeeming story of one pup’s extraordinary rescue with every animal lover you know.