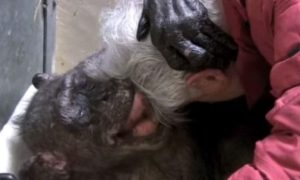 Dying Chimpanzee Recognizes Professor Friend Before Smiling and Embracing Him
0 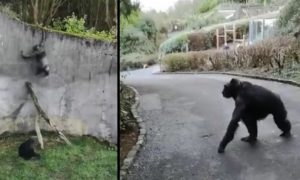 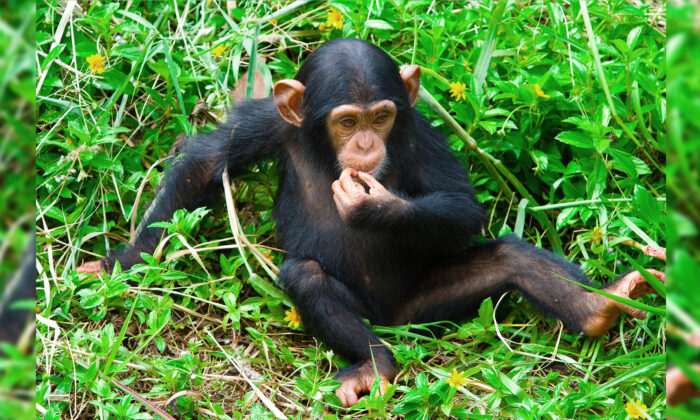 If you were to go to the Liberia Chimpanzee Rescue & Protection center (LCRP), you would be sure to see some adorable, rescued baby chimpanzees that have sadly lost their mothers to hunting or trafficking. But you’re just as likely to see some dogs, playing with the chimps, cuddling up to take a nap with them, or chasing a tennis ball around together.

The relationship between these canines and primates, and the way they help each other recover, shows that dogs aren’t just man’s best friend.

While the LCRP has many stories of rescue and rehabilitation that show the amazing ability of animals of different species to care for each other, the story of Snafu, a puppy rescued by the Desmonds from a cruel death on the streets, shows the healing power of family, humans, chimps, and all.

Yay – a great day for Jimmy! We’ve been in the US fundraising and I got stuck here due to some unexpected medical…

Jimmy Desmond is a wildlife veterinarian, and his wife, Jenny, is a passionate animal rescuer. Since creating Liberia Chimpanzee Rescue & Protection in 2016, they have made a temporary home for dozens of orphaned baby chimps before reintroducing them into the wild.

One of the linchpins of their non-profit operation has been their dog Princess, herself adopted from a rescue shelter, who has traveled the world with them and provides the emotional support many of the distraught infant primates need.

In November 2016, while driving along a remote road in Charlesville, Jenny Desmond found an emaciated puppy on the side of the road whose skin was badly infected and had worms. In a video by the animal welfare group Their Turn, Jenny explained: “You see, he’s being eaten alive. He’ll be dead in two days.” After persuading the negligent owner to let them take the dog, she brought the pup back to the rescue center.

They named her Snafu (after the area where he was found) and soon realized that “he” was actually a “she.” The first order of business was to give Snafu a medicated bath to clean off the layers of infected skin and fur. Then, Jim gave her an IV to help the pup get rehydrated and nourished. Snafu was so starved that she was digesting her own muscle.

Once Snafu’s health had stabilized, they needed to get to the point where the puppy would get her spirit back. “With most animals that we rescue,” Jenny explained, “there’s a day when they kind of take a turn. They want to live. And they feel better.” One morning, Snafu woke up with an unusual brightness in her eyes, and the Desmonds knew she would make it.

From there, the chimpanzees were instrumental in her recovery. They would lovingly carry Snafu down the stairs when her legs were too weak. They became the pup’s playmates, along with big sister Princess, who was key to the recovery of several chimps.

“Not only does [Princess]  welcome them and shower them with gentle kisses,” Jenny Desmond told The Dodo, “but she is also very protective of them. As they adjust and grow more comfortable, she also provides them with hours of enjoyment from cuddles to wrestling to playing chase!”

The same was true for all the chimps that Princess fostered when Snafu came around. They would hold Snafu as though she were one of their children. In other adorable moments caught on video, the chimps would gently hug Snafu on their tummies and roll around on the ground happily. They played with the puppy and even let her get her bark and play bite back.

Months went by, and Snafu grew healthier. But the Desmonds already had a full house, and so they knew just the place for her. Jenny’s nieces in Colorado had been dying to get a dog and were ready to shower Snafu with love. The puppy, once on the brink of death, was now going to her forever home.

While the contrast from tropical Liberia to the snowy Rocky Mountains was quite a change, she seemed to adapt to life there just fine. Even though the chimps that helped rehabilitate Snafu had to say goodbye, the Desmonds are always taking in new animals in distress and giving them a chance to get back on their feet.