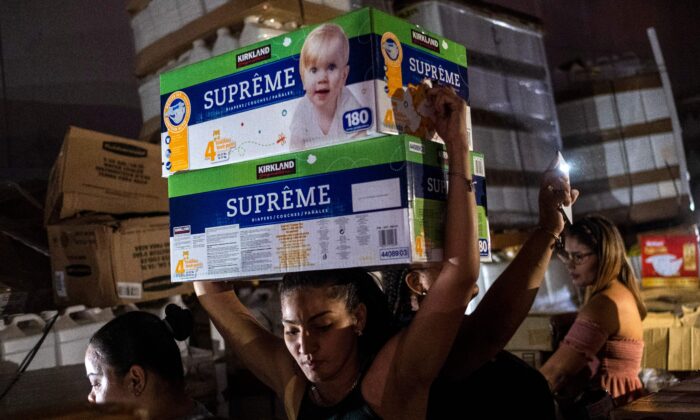 A woman carries boxes of baby diapers from warehouse filled with supplies, including thousands of cases of water, believed to have been from when Hurricane Maria struck the island in 2017 in Ponce, Puerto Rico, on Jan. 18, 2020. (Ricardo Arduengo/AFP via Getty Images)
US News

The head of Puerto Rico’s National Guard said the supplies and equipment that was housed for years in a warehouse in Ponce since Hurricane Maria will be distributed after the commonwealth’s governor fired three officials.

Jose Reyes, the head of the National Guard, was named head of the island’s emergency management bureau by Gov. Wanda Vazquez. He announced that those supplies will be distributed after locals discovered they sat unused for nearly three years, triggering a political firestorm that led to the firings of three officials including Puerto Rico’s Office of Emergency Management head Carlos Acevedo, Housing Secretary Fernando Gil, and Department of Family Secretary Glorimar Andújar.

“We have coordinated with the mayors and their Emergency Management division to not take them from one warehouse to another warehouse but to take it in coordination where the people are who need it, along with the shelters that are on the periphery of the villages,” Reyes said on Monday, reported El Vocero.

The items that would be distributed are 270 cots, 400 awnings, 700 portable stoves, and dozens of containers, he said. But he stressed there are more items around the warehouse.

“We are distributing everything that is here … Approximately 12 pallets are [being distributed] to each of these municipalities,” said Reyes.

Over the weekend, a viral Facebook video had shown angry locals breaking into a storehouse in an area where numerous people have been in shelters following a devastating earthquake earlier this month.

“There have been actions by government officials that have been completely unacceptable,” the governor said on Sunday, reported The Associated Press. After meeting with administration officials on Sunday, Vazquez said she was unable to obtain information from them about distribution centers.

“They weren’t able to personally tell me specifically where these centers were located, what they contained, and whether an inventory was completed,” she said in a statement. Gil and Andújar were singled out because she lost confidence in them, Vazquez wrote.

Ponce Mayor María Meléndez added that she is outraged over the scandal.

“I spent several days requesting cots and water,” she said in a statement. “They sent me to Cabo Rojo for the cots and to San Juan for the water. If I had known that those supplies were there, I would have demanded that they be taken out immediately. ”

On Twitter, Melendez wrote that Ponce and its officials had no knowledge of the warehouse storage findings. She said they are not managed by the city.

“Our people suffered greatly bc (sic) of how Hurricane María was managed,” she wrote. “We cannot allow history to repeat itself.”

The discovery came after President Donald Trump announced on Jan. 16 he would declare that “a major disaster exists” in the southern portion of Puerto Rico following hundreds of earthquakes that hit since late December, including a 6.4 magnitude tremor.

His office “ordered Federal assistance to supplement Commonwealth and local recovery efforts,” the White House wrote in a statement.