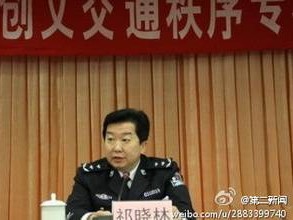 Qi Xiaolin, the Deputy Party Secretary of the Municipal Public Security Bureau of Guangzhou, the capital of Guangdong Province in the south, committed suicide on Jan. 8 around 6 p.m., according to Chinese state media reports.

The 55-year-old’s name was removed from the leadership list on Guangzhou Municipal Public Security Bureau’s official website before the news was announced; he had originally ranked third on that list.

The Guangzhou Municipal Public Security Bureau has claimed that Qi’s suicide was due to depression and other illnesses.

Qi’s death is just one of a large number of recent suicides and other “unnatural deaths” among officials in the Chinese Communist Party (CCP), many of which were explained as the result of depression, according to a report by Phoenix Weekly.

Sources say that when Wang Lijun, former chief policeman of the megalopolis Chongqing, fled to the U.S. Consulate last year, the faction led by former leader Jiang Zemin was thrown into turmoil.

Zhou Yongkang then gave up day-to-day power over the Political and Legislative Affairs Committee (PLAC), which controls the security forces, and then at the 18th Party Congress in November, the secretary of that organ was no longer in the top power organ in China, but merely in the Politburo, which sits below the Standing Committee. These changes alarmed officials who had relied on the PLAC for sources of revenue.

Anxiety is reported to have spread throughout the Public Security Bureau, the labor camp system, and other parts of the security forces, as cadres became afraid of being made scapegoats for the extensive human rights violations overseen by the PLAC over the last decade.

Pressure on Jiang’s faction increased after new leader Xi Jinping made a declaration at a political meeting on Dec. 4 that was met with public support: “A country ruled by law should first be ruled by the constitution, and lawful governance should be based on the constitution.”

In addition, human rights voices overseas have called for persecutors of the Falun Gong meditation practice to be brought to justice. Last month, former leader Hu Jintao personally visited Yancheng in Jiangsu Province, reportedly to personally investigate the appeal of two Falun Gong practitioners, sons of a senior Party official, who demanded an apology and compensation for being detained and tortured outside of any legal process.