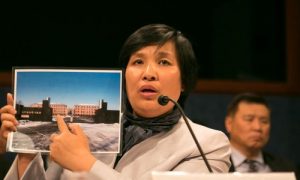 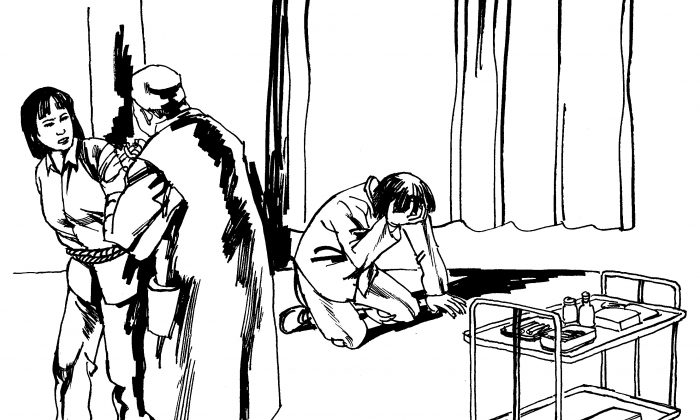 Illustration of a victim being forcibly injected with psychiatric drugs. Psychiatric abuse as a method of persecution is common in China, particularly against Falun Dafa adherents. (Minghui.org)
China Human Rights

Psychiatric Torture and the Unspeakable Suffering It Causes

Psychiatric torture is one of the more terrifying methods the Chinese regime uses to rein in those classed as “seriously interfering with public order” and who “disrupt social stability.” Falun Dafa practitioners, political dissidents, and citizens who dare to protest government policies frequently have these labels slapped on them to justify confining them in psychiatric hospitals.

The number of mental hospitals was increased across the country after the persecution campaign against Falun Dafa practitioners began in 1999. In September 2004, the Ministry of Public Security issued a public notice requiring provinces, autonomous regions, and municipalities to set up psychiatric hospitals as soon as possible if they didn’t have them already.

As of March 2014, Minghui.org—an online clearinghouse for first-hand information about the persecution of Falun Dafa—had published 7,700 articles about Falun Dafa practitioners being persecuted in psychiatric hospitals. However, these statistics are believed to understate the true numbers greatly due to the difficulty of investigating and obtaining information from China.

In these facilities and other detention centres, authorities forcibly administer psychiatric drugs to Falun Dafa practitioners to destroy their will and force them to “transform” (abandon the practice).

This approach is clearly laid out in an internal Party document that states Falun Dafa practitioners “must undergo a medical treatment method,” and “involve drugs when necessary and use medical methods and clinical experimental guidelines to achieve scientific transformation.”

Read More
Healing Betrayed: The Perversion of Psychiatry in China
Psychological Torture: Worst Scars Are in the Mind
Woman Kidnapped, Abused by Police While Visiting China

Other groups targeted by the regime are also subjected to such torture, such as democracy activists and Uighur Muslims.

Members of persecuted groups report having been used as guinea pigs and falling into prolonged periods of hallucinations after being injected with unknown psychiatric drugs. Others have suffered severe damage to their central nervous system from the injections. Yet others—mentally healthy when forced into the hospital for political reasons—became deranged or even died after being “treated” there.

The following seven cases shed light on the immense suffering caused by this heinous practice, which has been condemned by the World Psychiatric Association and other such organizations.

In July 2004, Chang Yongfu, a 44-year-old Falun Dafa practitioner, was taken to a psychiatric hospital in Harbin City where he was forcibly injected with drugs. Two years later, after he was allowed to go home, he was mentally disoriented, his face and nose were swollen, and he could hardly see. He couldn’t sleep at night and yelled incoherently. After he regained his senses somewhat, he told his family he’d been injected with unknown medication at the hospital, which caused pain throughout his entire body. Later, his nose became more and more swollen and bled constantly. He also lost his eyesight.

When Chang died on January 18, 2007, his ears and eyes were bleeding, and his nose and mouth were filled with blood.

‘Mood-Altering Drugs Have Taken Their Toll’

After being labelled by the police as mentally ill, elderly pro-democracy activist Qiao Zhongling has been shuttled between three separate psychiatric hospitals in Shanghai over the past nine years. Qiao, 74, was deemed a “counter-revolutionary” during the Cultural Revolution period and later joined the democracy movement.

According to his former psychiatrist Ma Jinchun, who now lives in the United States, Qiao’s health has greatly deteriorated due to the force-feeding of psychiatric drugs. “Mood-altering drugs have taken their toll on Qiao Zhongling, causing his hands and mouth to shake constantly,” Ma said. “He also suffers from high cholesterol, memory loss, and other symptoms. His situation is very bad.”

Zhang Fuzhen was a Falun Gong practitioner from Shandong Province. In 2001, she was arrested and sent to a brainwashing centre. Sun Fuxiang, who was assigned to monitor Zhang, witnessed what happened to her before she died.

“The police stripped Ms. Zhang of her clothes and shaved her head,” Sun recounted. “They tortured and insulted her. She was tied spread eagle on a bed. She had to relieve herself on the bed. Then they injected some unknown, poisonous drug into her. Right away she was in unbearable pain. She struggled as if she were being driven out of her mind, and she died in absolute agony.”

One day, a doctor kicked Wang to the ground and then tied him to an iron bed. After torturing him for a while, the doctor gave him an injection, then beat him again for another while. This process was repeated for 11 hours, with Wang receiving a total of seven injections. As a result, Wang lapsed into a vegetative state, constantly drooled, and could no longer take care of himself.

Falun Dafa practitioner Wang Yujie was arrested in March 2010 and detained in a forced labour camp for a year before being transferred to a brainwashing centre in Wuhan City.

Right before she was released, she was injected with unknown drugs. At home, Wang started foaming at the mouth and vomiting severely. She couldn’t eat or even drink water. Her whole body hurt so much that she cried continuously. She became blind, then deaf, and her hands became deformed. After four months of agony, she passed away in September 2011 at the age of 24.

Uyghur Muslim Gulbakhar Jalilova spent 15-months interned in an all-female camp in the Xinjiang capital of Urumqi before she was released last September.

During that time, she saw people who were forced to ingest unknown medicine daily and were injected with a substance every month that “numbs your emotions.” “The injection makes you feel like you have no memory. You don’t miss your family, you don’t feel like you want to get out. You feel nothing—it’s a very strange feeling,” she said.

She witnessed one woman fall to the floor after eating poisoned food. “There were bubbles and foam coming out of the lady’s mouth … she was paralyzed,” she said. She also saw a detainee  “put to sleep … she was killed by injection. She just died like that in front of me.”

‘They injected me with some sort of drug’

On April 13, 2007, Falun Dafa practitioner Wei Fengju was released from a forced labour camp in Changchun City where she had been tortured physically and mentally. She was so skinny and weak that she could barely eat anything and couldn’t take care of herself. A month after her discharge she began to have severe diarrhea, she ached all over, and her weight dropped drastically. She also had vision problems and mental confusion. She passed away in July of that year. She once told her family, “I cannot be healed. They (the guards in the labour camp) injected me with some sort of drug.”