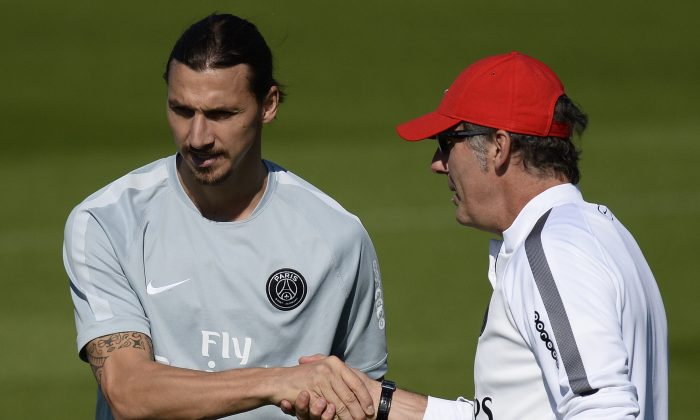 PSG and Rennes are set to play in a Ligue 1 match on Saturday, September 13.

The game will also air on TV5 Monde USA in the United States.

PSG are 8/15 to win the match, while Rennes are 7/1 to win according to OddsChecker.

See an AP preview of this week’s Ligue 1 action.

PARIS (AP) — Paris Saint-Germain has made a slow start to its title defense, but things could soon be looking up if Zlatan Ibrahimovic continues his scoring form away to Rennes on Saturday after impressing for Sweden during the international break. With no genuine early-season pace-setter, the top eight teams are within three points of each other.

Here are some things to know about this weekend’s Ligue 1 games:

Zlatan Ibrahimovic seems to be getting better with age.

Although the imposing Swede will be 33 years old next month, but there seems little to stop his scoring spree from continuing.

He tops the French league’s scoring charts with five goals — despite playing only two matches. Earlier this week he became his nation’s all-time top-scorer with 50 goals after scoring twice in a friendly against Estonia, surpassing the 49 by Sven Rydell from 1923-1932.

Since joining from AC Milan two years ago, Ibrahimovic has scored 61 league goals in just 70 games, putting him fourth on the list of active strikers in terms of goals scored.

But his record is vastly better than any of them.

Much-traveled striker Djibril Cisse has 96 goals in 201 matches; Marseille’s Andre-Pierre Gignac has 84 in 256, and Saint-Etienne’s Mevlut Erding totals 77 in 232.

Although Marseille’s form has picked up after back-to-back wins, tensions have been running high after coach Marcelo Bielsa’s astonishing outburst against his own club president last week.

Furious at how late deals were done as the summer transfer window closed, Bielsa blasted Vincent Labrune for reneging on promises and even said the club had signed Brazilian defender Doria behind his back.

Labrune has yet to publicly react to Bielsa’s stinging criticism, but RMC radio reported that he is considering how to reprimand for the Argentine coach, who merely confirmed the reputation he has earned over the years as a fearlessly outspoken manager.

Doria, who hopes to make his debut away to Evian on Sunday, is playing down the fuss.

“It doesn’t change anything for me, it’s a problem between the coach and the director,” he told sports daily L’Equipe on Thursday. “People told me Bielsa had been following me for a year, (but) he says he doesn’t know me. I’ll do my job and prove my worth to him.”

With Lyon struggling badly for form, Yoann Gourcuff’s return from his latest injury setback will be a welcome boost.

Gourcuff has been passed fit and is included in the squad to face Monaco on Saturday. After four rounds of matches, Lyon is down in 17th place with only three points.

The creative midfielder has been beset by a catalogue of injuries since joining Lyon from Bordeaux four years ago in a deal worth €26 million ($33.6 million).

Once hailed as the natural successor to France great Zinedine Zidane, the 28-year-old Gourcuff has been injured 15 times and has never played a full season, missing 20 league games in the last campaign.

Gourcuff’s huge wages have also hurt the club’s finances, and Gourcuff recently agreed to a significat pay cut as part of talks over a new contract. His net annual income, including image rights and bonuses, is set to drop from €7 ($9.05 million) million to about €5 million ($6.5 million).

PSG goalkeeper Salvatore Sirigu has signed a new three-year contract tying him to the club until 2018.

Sirigu was one of PSG’s first signings after it was taken over by Qatari investors QSI in June 2011. He was voted the French league’s best goalie last season and he is set to make his 140th club appearance against Rennes. He has won two league titles and a League Cup trophy with big-spending PSG.

“I know we’re only at the beginning of something exceptional,” Sirigu said. “We’re going to win many more trophies together.”

According to reports Thursday, highly-rated midfielder Marco Verratti is poised to sign a year’s extension to his current deal, tying the 21-year-old Italy midfielder to the club until 2019.

The president of the French League has offered the League Cup as a testing ground for the use of video replays.

FIFA President Sepp Blatter said on Monday he wants to test replays in matches by next year, whereby coaches would have the right once or twice in each half to challenge a refereeing decision.

LFP chief Frederic Thiriez says “I will offer FIFA the possibility to test it during the League Cup, which has always been an innovative tournament.”

Thiriez adds that it would be useful in “three concrete cases,” namely “to see if the ball has crossed the line, if a goal has been scored with a hand and if a foul has been committed in the penalty area.”