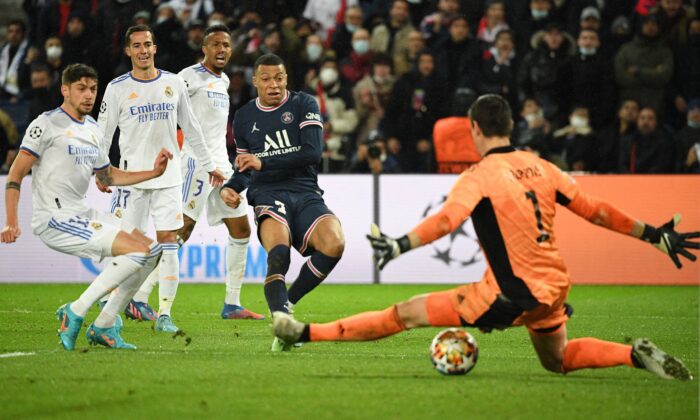 In the first leg of the round-of-16 of the Champions League, Kylian Mbappe scored in the final minute to give Paris Saint Germaine (PSG) the 1–0 win over 13 time UCL winners Real Madrid, at Parc des Princes stadium in Paris on Feb. 15; and a one-goal advantage as they head to the second leg in three weeks in Madrid.

“Mbappe is the best player in European football,” said Madrid manager Carlo Ancelotti, and is reported to be heading to Madrid during this summer’s trade window. PSG still has superstars Neymar and last year’s acquisition of Lionel Messi.

“It was a great game for us and I’m always ready to help my team, there are no distractions,” said Mbappe.

PSG dominated possession with 57 percent of the ball possession, 21 shots with eight on goal, and seven corner kicks.

Primarily from counter-attacks, Madrid only had three shots, with none on goal. Madrid committed 12 fouls, to PSG’s 14. Both teams received four yellow cards each.

PSG had their first opportunity five minutes in as Mbappe cut the ball inside at the left edge of the box, beating the marking by Dani Carvajal, for a cross eight yards out from the center of the goal. However, Angel Di Maria, with heavy defensive pressure, could only flare a shot high over the crossbar.

The play was primarily on Madrid’s side of the field, as there were numerous shots throughout the match, forcing Courtois to make eight saves.

In the 18th minute, Mbappe received an excellent lofted pass, from Lionel Messi, that dropped inside the left side of the box, for a first-time shot attempt after bouncing once 16-yards away from the left post, but was blocked by Courtois.

Courtois was able to read Messi’s low left-footed penalty shot that was not struck purely, only about 7 feet toward the right side of the goal, to make a heroic diving save.

“Our counter-attack didn’t work today,” said Courtois. “It’s hard to lose, but the second leg is wide open. We have to win and we will try to do it in front of our fans, [which] is a great advantage.”

In the 87th minute, Neymar would get his best opportunity, with a pass from Messi deep toward the right end-line, but had very little angle striking a shot high over the goal. Neymar is working his way to regular form following an injury.

The game seemed likely to end in a tie, frustrating PSG. But in the 94th minute with about 30 seconds of added time, PSG regained possession for a final attack.

Presnel Kimpembe pushed the ball up the center of midfield and made a pass toward the left to Mbappe, checking back to the ball, who then provided a wall-pass outside to the left flank to Neymar.

Neymar, having substituted in the game for Di Maria with 20 minutes remaining in regulation, turned the ball inside pulling two defenders with him, then made a back-heel pass to an open Mbappe, who was still on the left wing.

Mbappe dribbled, splitting defenders Eder Militao and Lucas Vasquez with a penetrating cut to the inside, and took a right-footed shot, as Federico Valverde came in late to attempt a block, slotting a low blast below the outstretched leg of goalkeeper Courtois into the right side-netting.

It was Mbappe’s 32nd goal in 52 games in the Champions League, and 13 in his last 13 Champions League matches. Mbappe has been involved in 52 goals, either scoring or assisting.

Mbappe had also scored a late game-winner in French League 1, defeating Reims in their previous game on Saturday.

“We have to be humble and the second leg is still open,” said Mbappe. “It will be a hard game, but we will have the advantage, and are very confident.”

The second leg will be played on March 9, and Madrid will miss central midfielder Casemiro and defender Ferland Mendy due to yellow card accumulation during the competition.