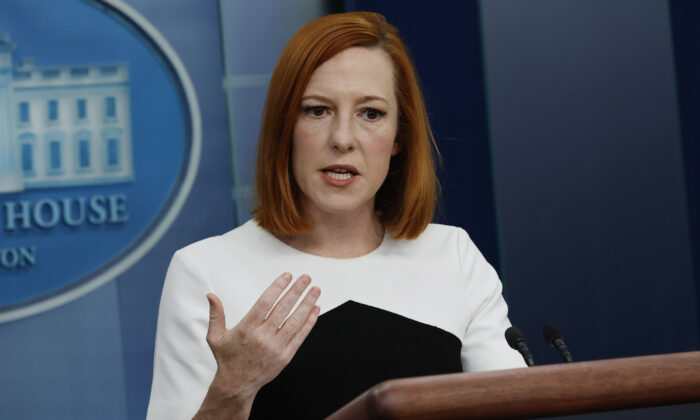 Psaki: Joe Biden and Son Hunter ‘Were Not Office Mates’

White House press secretary Jen Psaki said Hunter Biden and President Joe Biden were never “office mates” in response to a line of questioning about a 2017 email that was sent by Hunter to his father.

When asked by a reporter on Wednesday about the email suggesting that the “president, at one point, was office mates with Hunter and his brother Jim here in D.C.,” Psaki responded by saying those reports were “not accurate” and added that “they were not office mates.”

An email that surfaced from a laptop owned by Hunter Biden entailed his request that keys be made for new “office mates,” listing President Biden, Jill Biden, and others for a space he planned to share with the chairman of a Chinese energy company.

The email was sent to the manager of a Washington D.C. office building, and it read: “Please have keys made available for new office mates: Joe Biden, Jill Biden, Jim Biden,” said the email, which had the subject of “507.” Jim Biden is President Biden’s brother and Hunter Biden’s uncle.

The younger Biden also requested keys for Gongwen Dong, which he called the “emissary” of Chinese conglomerate CEFC Chinese Energy Co. Chairman Ye Jianming, according to the email.

“I’ve seen the report. I have no confirmation or comments on a report about whether or not the president, when he was a private citizen, wrote a college recommendation letter for an individual,” Psaki said on Wednesday. “He was not the president at the time.”

In late 2020, the New York Post uncovered the laptop and emails with just days to go before the presidential election. At the time, a number of legacy news outlets and former intelligence officials claimed the laptop narrative was “disinformation,” but those same news outlets last month said they confirmed the contents of the device are authentic.

A former Hunter Biden business partner, Tony Bobulinksi, said in October 2020 that then-candidate Joe Biden was “plainly familiar” with his family’s business dealings in China, which Biden denied during debates with former President Donald Trump. Bobulinksi was among those who received a now-highly publicized 2017 email that referred to Joe Biden as the “big guy” and who would receive 10 percent of a joint-venture deal with CEFC and Hunter Biden.

Biden and White House officials have repeatedly denied that he was involved with his son’s business dealings. Claims that he knew about his business or whether they were corrupt have been “totally discredited,” Biden said during a 2020 debate with Trump. “Look, my son did nothing wrong at Burisma,” referring to a Ukrainian natural gas company of which his son held a board position.

The U.S. Attorney’s Office in Delaware opened an investigation into the younger Biden’s finances and other matters in December 2020.

“I take this matter very seriously but I am confident that a professional and objective review of these matters will demonstrate that I handled my affairs legally and appropriately, including with the benefit of professional tax advisors,” said Hunter Biden at the time.

And over the past weekend, White House chief of staff Ron Klain said the president is confident that his son did not break any laws.

“Of course the president is confident that his son didn’t break the law,” Klain told ABC News’ “This Week” in response to renewed discussion about his overseas business ties and the content of a laptop hard drive that belongs to him.

“The president is confident that his family did the right thing,” Klain added, who said Biden has not attempted to communicate with the Justice Department about the U.S. Attorney probe. “But again, I want to just be really clear. These are actions by Hunter and his brother. They’re private matters. They don’t involve the president. And they certainly are something that no one at the White House is involved in.”

The Epoch Times has contacted Hunter Biden’s lawyer for comment.