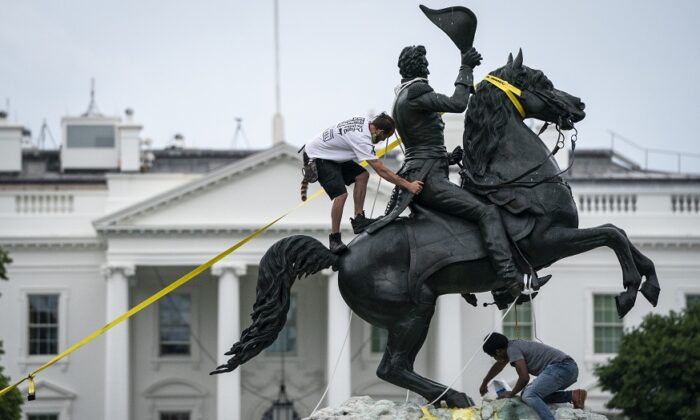 Provincials in Time, the Woke Are Due a Reversal

Will 2022 be the year that woke ideology crests and begins its melancholy withdrawing roar?

I wouldn’t count on it, but there are some scattered signs of impatience and spine-stiffening.

Campus Reform even found some examples among the wokest of woke menageries, reporting “10 times universities said no to the woke mob in 2021” (hat tip to Instapundit, where I first saw the story).

None of the super-rich redoubts were on that list, of course—no Yales or Harvards, and certainly no Williamses, Smiths, or Swarthmores.

Still, the report might be interpreted as a sort of harbinger—a sparrow of dissent indicating the advent of a spring of sanity.

Or maybe it was just a somnolent groundhog wrested from its place of hibernation, only to glimpse its shadow and thereby foretell another long spate of winter.

My own sense is that the soldiers of wokeness, neglecting Gertrude Stein’s admonition to be sure to know how far to go when going too far, have condemned themselves first to ridicule and then to irrelevance, not neglecting criminal prosecution in certain cases.

Almost every comestible one buys these days comes with a label listing not only its ingredients but the percentage of each.

The addiction to polysaturated racism among the woke—the fact that they are human koalas, battening almost exclusively upon the fragrant leaves of charges of racism—makes them eminently predictable.

Like koalas, the woke are asocial animals, but, unlike those cute critters, they aren’t largely sedentary, preferring instead to rampage throughout urban cityscapes setting fire to or smashing up all manner of private and government property in the name of justice.

For one brief moment, there was a certain macabre novelty in watching pathetic news reporters for the regime media stand in front of burning police stations while telling their audiences that the protests they were witnessing were “mostly peaceful.”

As I say, it did take some people aback, momentarily, but then it wasn’t long before the ridicule did its job, and cynicism fought with outrage to disparage and discard the wardens of wokeness.

It wasn’t only the combination of breathtaking ignorance with overweening arrogance that made the witches brew of wokeness so repellent.

There was also the rebarbative scent of thuggishness that suffused any situation sufficiently woke.

The tactic only works when the intended audience plays along.

Practically, that means that they have to conspire in their supposed, but in fact, wholly manufactured, racism, making concessions, “redistributing” resources, in short paying off the woke marauders.

Psychologically, they must add to that subservience a confession of ineradicable, but wholly fictitious, guilt, as if being white, or male, or educated, heterosexual, or well-to-do were a badge of moral turpitude.

I might, of course, be mistaken, but I do sense a rising impatience with this unattractive debility.

“Grow up,” I seem to hear people mutter when they read The New York Times, watch CNN, or encounter the latest insanity from the “lives of others” on campus.

At the end of the day, I suspect that it will be the unstoppable arrogance of the woke, combined (as I noted) with their bottomless ignorance, that will put paid to their swaggering claims of moral superiority and efforts at social blackmail.

Anyone who has looked into the mephitic swamp that is the 1619 Project will know what I mean.

Yes, I know, aspects of that supremely tendentious and ill-informed rant are being adopted by schools across the country.

I had occasion to enter a large Barnes & Noble bookshop recently and noticed a huge display given over to the 1619 Project.

Nevertheless, that exercise in malignant, racially fired fantasy has been so widely debunked that it’s rapidly being consigned to the cabinet of acknowledged fraudulent curiosities, like those tracks claiming that the Apollo moon landing never happened or that Elvis is alive and living in a CIA safe house.

But, in second place, I would put its lack of curiosity and extraordinary historical blindness.

This is a point that the British writer David Cecil touched on in his book “Library Looking Glass.”

“There is a provinciality in time as well as in space,” Cecil wrote.

“To feel ill-at-ease and out of place except in one’s own period is to be a provincial in time.

“But he who has learned to look at life through the eyes of Chaucer, of Donne, of Pope, and of Thomas Hardy is freed from this limitation.

“He has become a cosmopolitan of the ages, and can regard his own period with the detachment which is a necessary foundation of wisdom.”

The woke crusaders are “provincials in time” in Cecil’s sense.

There are stuck in the here and now.

Consequently, they to a man (if it is still permissible to use the term “man”) also exhibit another disagreeable trait in addition to temporal provinciality.

They also presume that their own moment, right now, occupies an eyrie of hitherto unsurpassed moral perfection.

It’s this presumption that underlies their intolerant criticism of anything and anyone that departs from their own understanding of rightness.

It is a breathtaking, and ultimately ridiculous, sort of arrogance, and it will, I predict, be rewarded with a stern reverse peristalsis of moral repudiation in society at large.

That cathartic moment, alas, is unlikely to occur before the woke Comanches claim some additional scalps—yet another figure that is no doubt destined for a place on the Index Sententiarum Prohibitarum.